Shut Down Computer in Windows 10

If you plan on walking away from your PC for a while, it might be best to shut it down completely. That way you don’t use any additional power, and you also preserve the hardware inside your computer so that hardware can hopefully last you longer.

Shutting down a computer that is running on a version of the Windows 10 operating system is going to close all applications, sign out all users and close all work that is not saved, so it’s important that you do that before going ahead with the shutdown process.

There are quite a few ways one can turn off a Windows 10 computer. Many of them you will already know from previous versions of Windows. Other’s you might not have heard about before.

How to turn off a computer in Windows 10

Shutting down the PC using the Start menu:

Click on the Power button from the Start menu’s left side pane.

Select “Shut down” from the Power menu to power off the computer.

Close down your web browser windows, so you are on the desktop and then hold the Windows key + X hotkey combination down to bring up the User Tasks menu. It is here where you can then hover over the “Shut down or sign out” option and then click on “Shut down” from the secondary menu. 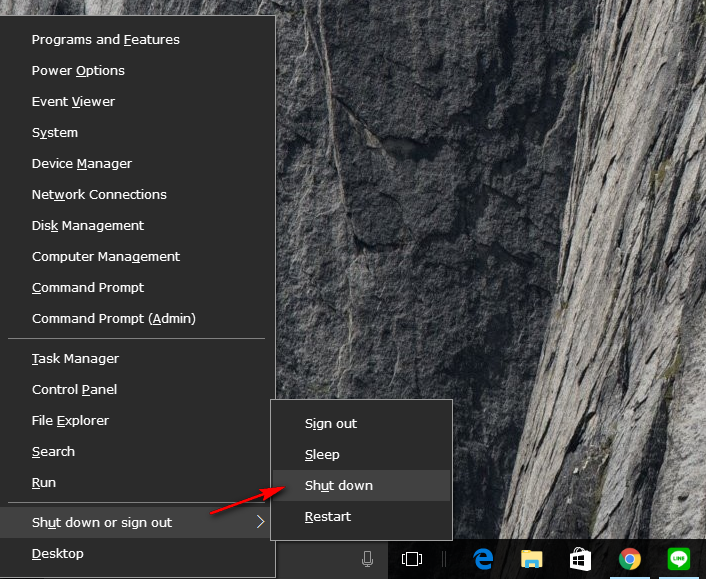 Shutting down the PC sing the Alt + F4 key combination:

Another trick that not many people know about is pressing the Alt + F4 keys. This one can be a problem sometimes because both the Alt and F keys can do other things depending on what you have open. For example, if you are doing something with a browser open, the Alt key to want to leave a page and the F key can sometimes close down tools that you might have open.

Once you have the Shutdown Windows dialog box open, just click on the drop-down menu where it says “Shut Down” to bring up some more options.

Click on the “Shutdown” option from the drop-down menu to turn the computer off completely.

Those were a few of the more common ways for people to shut down a Windows 10 computer. There are some more ways that hardly ever get used. For example, you can actually turn off the computer from inside the PowerShell by typing the command “stop-computer, ” or you can open a Command Prompt window and type “shutdown /p” plus a range of different commands.

Mathew is a qualified Microsoft Windows systems administrator (MCSA) who has covered OSs, browsers, the internet, and related tech since 2011. He is the founder and editor of ConsumingTech.com and is a freelance tech writer for various publications around the Web. Mathew graduated from DDLS Melbourne (now Lumify). He grew up in Melbourne and lives in rural Victoria, Australia. Read Mathew's full biography. Mathew's social profiles: Twitter, Facebook, Mastodon, Instagram, LinkedIn, and Github.
« Change Windows 10 Network Location to Private or Public» Enable/Disable Google Chrome Background Tab Throttling in Windows