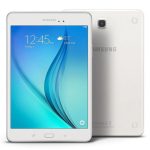 The Samsung SM-T350 was released in May of 2015 and came with Android 5.0 Lollipop out of the box. Since tablets don’t get used as often as smartphones, there are many perfectly good Samsung SM-T350 tablets still being used today. And if you’ve managed to change the battery, there’s no reason it couldn’t be used as a perfectly good eReader for many years to come.

One of its downfalls though was a lack of firmware releases, so it’s of little surprise these files are hard to come by. Since Samsung doesn’t offer direct download links from their website for common Samsung device owners, it leaves you with one of two options: download the files from a blog that has scraped Samsung’s servers, or use one of the free-to-use Samsung firmware update tools that will download the files directly from Samsung’s servers for you.

In short, it is the latter we will discuss because it’s more reliable than the former. Additionally, firmware files are often very large files, and inconceivable how a site can have a great many of them all at once. Thankfully, there is no reason to have to download thousands of Samsung firmware files because there are tools you can use to download the files for you. I will list them below.

The most popular tool for downloading Samsung firmware used to be SamFirm. It allowed you to download any Samsung firmware for any device. Now, there is a new successor to that original tool called SamFirm_Reborn that is just as reliable. We spend a lot of time reading the work of Samsung developers.

Developed by Ivan_Meler, SamFirm_Reborn has had the legacy app decompiled and the codebase patched so that the tool is compatible with the official Samsung servers and the firmware updates that get applied to them.

SamFwTool is similar to SamFirm_Reborn in numerous ways. It is a free tool for downloading Samsung firmware updates. And it’s also the second iteration of a tool that was once abandoned. SamFwTool takes the place of SamFirm-continued which was a fork of the original SamFirm tool spoken of above. There is little difference between SamFirm_Reborn and SamFwTool as far as interfaces go; each is as easy to use as the other. What I cannot confirm though is if one can fetch more firmware files than the other. From what I have read, SamFwTool is a reliable backup option for many developers, which means it tends to have just as many firmware files available to download from Samsung as the others.

Frija downloads firmware files directly from the Firmware Update Server (FUS) without any redirections in between. That is to say, there are no other websites required to make the download happen — not even this one. All three tools are capable of doing that. But one thing that potentially separates Frija from the others is the built-in support form it comes with which allows you to email the developer of the tool directly should you have any concerns or encounter any bugs. Since there aren’t millions of daily users for tools such as these, you certainly may get a response if you need one.

Mat Diekhake is the editor of ConsumingTech.com. He has been inseparable from the internet since Web 2.0 in 2005, and by 2008 decided on a career in IT. With a never ebbing desire to cover technology, he spends most days consumed by Windows, Linux, and Android in particular. Though he has spent innumerable hours learning consumer software in general, formally and as an autodidact, and has personally authored over 10,000 articles since 2010. He is a qualified Microsoft Windows systems administrator (MSCA). Read Mathew's full biography. Mathew's social profiles: Twitter, Facebook, Instagram, LinkedIn, and Github.
« Samsung S20 OEM ROMs