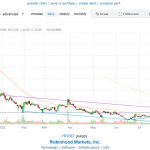 Robinhood has been slandered by a lot of investors including Charlie Munger and Warren Buffett for the way it does business. But for many retail investors, it made the market accessible to everyday people who don’t have tens of thousands of spare money to invest. Before companies like Robinhood, you needed to put at least $20,000 down to get an institution to buy a stock for you. It was outdated, and Robinhood is still in the process of revolutionizing markets for retail investors.

If you take a look at Cathie Wood’s ARKK ETF fund, you will see that once the pandemic began, its price rose dramatically. This is said to be due to the number of retail investors entering the market with their stimulus checks. I haven’t tried to study whether that is true or not, but the timing was very much a coincidence.

I have been sitting in front of a computer since 2011 and covering technology every day. Yet, it wasn’t until 2020 that even I started investing online. It simply was not accessible even to those who were internet savvy. Many of those retail investors who entered the market at the same time as I did have lost a lot of money so far this year. And no doubt many of those who lost money won’t be investing with their money again the same way they were over the last few years. But there are a lot of potential retail investors out there who are yet to start using online investment platforms and will one day become regular users of platforms just like Robinhood.

Robinhood’s price likely bottomed at $6.94 in June. The markets were declining extremely quickly back then, so even at that low price, it wasn’t an obvious buy. Now several months on and Robinhood’s price is still just over $10. For an investor with a 10-year time horizon, this is a very cheap price. I do not doubt that Robinhood will continue to exist for as long as its founder is alive. And presumably, it will continue for a lot longer than that. The only question is how much competition will it have and how much will that competition force its fees down. We are already seeing eToro enter the US market to provide some competition. However, that’s a good thing for everyone including Robinhood itself. Given how much money it takes to compete with a company like Robinhood, it’s likely a safe investment for the next decade.

Mat Diekhake is the editor of ConsumingTech.com. He has been inseparable from the internet since Web 2.0 in 2005, and by 2008 decided on a career in IT. With a never ebbing desire to cover technology, he spends most days consumed by Windows, Linux, and Android in particular. Though he has spent innumerable hours learning consumer software in general, formally and as an autodidact, and has personally authored over 10,000 articles since 2010. He is a qualified Microsoft Windows systems administrator (MSCA). Read Mathew's full biography. Mathew's social profiles: Twitter, Facebook, Instagram, LinkedIn, and Github.
« Salesforce Could Fall Further Due to Higher Dollar – Sept 18, 2022» ARKK Broke Away from Nasdaq for First Time This Year – Sept 18, 2022