Salesforce Could Fall Further Due to Higher Dollar – Sept 18, 2022 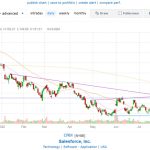 Before we had confirmation that a bear market had begun at the start of the year, I had considered buying the dip in Salesforce as I searched for the next trillion-dollar company. Thankfully, I wasn’t heavily invested by February and March when it faced steep declines. Salesforce stock fell for eight months in a row which would have left many investors hurting.

Salesforce is one of the stocks that has not been volatile over the past decade. Couple that with the fact that its current price of $151 is a significant level of support that has not been broken since 2019 apart from a brief period at the beginning of the pandemic, and you may think this is a safe time to buy. However, you should be careful with this stock for a while longer.

The American economy is likely in a recession. However, that doesn’t mean the American dollar isn’t still being used as a haven around the world. It is, and that’s why the dollar is currently so strong. The strong dollar could potentially hurt Salesforce though because as a worldwide company it relies on people buying its services with the dollar, which means for those living outside of the US, more of their local currency is required to afford a Salesforce subscription.

It’s hard to say how big of an economic downturn the world is about to suffer from in general. The reason we have an inflation problem is that so many people refuse to stop spending, which doesn’t suggest a big economic downturn is near. And most Salesforce subscribers are big businesses that use its software to connect numerous employees of the same organization. So it could be that Salesforce doesn’t drop in price much lower from here even with a strong American dollar. But it could. And the risk might be a reason why many people choose to stay away from this stock for now, which means the short-term upside might be limited.

Mat Diekhake is the editor of ConsumingTech.com. He has been inseparable from the internet since Web 2.0 in 2005, and by 2008 decided on a career in IT. With a never ebbing desire to cover technology, he spends most days consumed by Windows, Linux, and Android in particular. Though he has spent innumerable hours learning consumer software in general, formally and as an autodidact, and has personally authored over 10,000 articles since 2010. He is a qualified Microsoft Windows systems administrator (MSCA). Read Mathew's full biography. Mathew's social profiles: Twitter, Facebook, Instagram, LinkedIn, and Github.
« Zoom Could Be Very Attractive Long-Term Buy – Sept 18, 2022» Robinhood Is One of the Best Tech Stocks for 2023 and Beyond