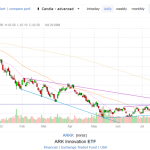 Since the start of the year, Cathie Wood has been saying that her stocks are undervalued and the larger capped stocks in Index funds are overvalued, but her stocks have always fallen and risen at the same time as the indexes. However, earlier this week we saw that change for the first time.

The ARKK fund saw a significant green day when both the Nasdaq 100 and S&P 500 were down in the red. Cathie Wood has said for months that when the US is in a recession her stocks will rise and the Nasdaq and S&P will fall. This is the first hint we’ve seen all year of that potentially happening.

Given how far the Nasdaq and S&P have fallen already this year, I don’t foresee ARKK rising while the indexes are falling becoming a new trend. Cathie Wood would disagree with me though, as she has stated several times that her funds have bottomed. Cathie first made the call that her stocks had bottomed in January when ARKK fell to $57 and yet her stocks fell much further the following months down to $35. So unfortunately her words don’t mean much at this point, though I do believe she honestly thinks her stocks have bottomed.

Mat Diekhake is the editor of ConsumingTech.com. He has been inseparable from the internet since Web 2.0 in 2005, and by 2008 decided on a career in IT. With a never ebbing desire to cover technology, he spends most days consumed by Windows, Linux, and Android in particular. Though he has spent innumerable hours learning consumer software in general, formally and as an autodidact, and has personally authored over 10,000 articles since 2010. He is a qualified Microsoft Windows systems administrator (MSCA). Read Mathew's full biography. Mathew's social profiles: Twitter, Facebook, Instagram, LinkedIn, and Github.
« Robinhood Is One of the Best Tech Stocks for 2023 and Beyond» Buy Xpeng After Selling Off to New Lows – Sept 19, 2022