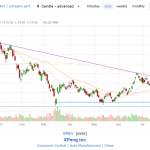 Chinese stocks have been selling off hard over the last couple of weeks because the Chinese government decided to shut down more cities in the wake of a new Covid outbreak. Xi Jinping has stated that he isn’t willing to sacrifice human lives for his economy.

We’ve seen this happen once before earlier in the year in China where a city was closed down due to a Covid outbreak and many stocks such as Nio fell to new lows for the year. Interestingly, Nio hasn’t fallen to new lows this time, but its main Chinese competitor in the EV market, Xpeng has.

I have been following Nio very closely since 2020 and it was one of my favorite stocks over the last few years. But given its popularity with investors, I am now less invested in it and have instead shifted my focus to Xpeng because Xpeng seems to be better value today.

I don’t expect Xpeng to stay under $20 for long. And it could bounce back to $30 quite quickly. If it does, Nio could soon be my favorite choice of the two again. However, for now, it is Xpeng that has my undivided attention. It can’t go much lower than where it is now unless something drastic happens in China. And by drastic, I mean more than just a recession announcement. The current price of Xpeng suggests most American investors already assume China is in a recession.

Any investor needs to be careful how much money they put into Chinese stocks at the moment because the risk of China being involved in a “war” is always just a headline away. We saw earlier in the year that the US has it correct when they said Russia was close to invading. The US has recently said China wants to take over Taiwan. If China does invade Taiwan, its stock market could tank or even close for an extended period. So invest carefully, but don’t miss obvious opportunities when they present themselves either such as what you see with Xpeng’s current price.

Mat Diekhake is the editor of ConsumingTech.com. He has been inseparable from the internet since Web 2.0 in 2005, and by 2008 decided on a career in IT. With a never ebbing desire to cover technology, he spends most days consumed by Windows, Linux, and Android in particular. Though he has spent innumerable hours learning consumer software in general, formally and as an autodidact, and has personally authored over 10,000 articles since 2010. He is a qualified Microsoft Windows systems administrator (MSCA). Read Mathew's full biography. Mathew's social profiles: Twitter, Facebook, Instagram, LinkedIn, and Github.
« ARKK Broke Away from Nasdaq for First Time This Year – Sept 18, 2022» Is Coinbase Preparing for a Breakout? – Sept 18, 2022