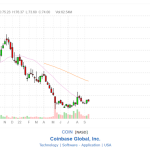 Coinbase could be a wise stock to get into if you need to avoid the high spread fees many stock brokers have for cryptocurrencies. However, I’ve been cautious about investing in Coinbase this year because some analysts have suggested their fees are going to need to come down soon due to increased competition.

Since I’m someone who hopes my stock broker fees come down soon thanks to increased competition, it seems plausible that Coinbase may have to reduce its fees. If Coinbase does reduce its fees, its earnings will decline and so will its stock price.

The rise in Coinbase buying among insiders and institutions coincides with many technicals suggesting that Bitcoin has already bottomed. It’s plausible to assume that if Bitcoin has bottomed, it means Coinbase could have as well, regardless of what happens to smaller capped stocks during the rest of this bear market. Not all small-cap stocks will rise at the same time from here until the next bull market begins, and Coinbase is a prime example of why that is the case.

There are two more notable reasons Coinbase might be heading for a breakout soon. First is the Ethereum merger that has just been completed in the past week which could create renewed enthusiasm for cryptocurrencies. The other reason is that the technicals show we have come to the end of a wedge pattern which means a new pattern needs to begin.

I don’t have any positions open on Coinbase now because its $74 price and 17.39 billion market cap are higher than I was expecting. It also has a Relative Strength Index of 50.16 which is also higher than ideal at such a stage of a bear market. However, I will be watching it closely over the coming weeks because it could rise rather dramatically when the stock starts to rise and more bulls begin to notice it.

Mat Diekhake is the editor of ConsumingTech.com. He has been inseparable from the internet since Web 2.0 in 2005, and by 2008 decided on a career in IT. With a never ebbing desire to cover technology, he spends most days consumed by Windows, Linux, and Android in particular. Though he has spent innumerable hours learning consumer software in general, formally and as an autodidact, and has personally authored over 10,000 articles since 2010. He is a qualified Microsoft Windows systems administrator (MSCA). Read Mathew's full biography. Mathew's social profiles: Twitter, Facebook, Instagram, LinkedIn, and Github.
« Buy Xpeng After Selling Off to New Lows – Sept 19, 2022» Arrival Drops to New Lows for the Year – Sept 20, 2022