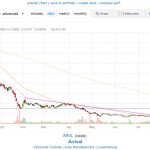 Arrival dropped below 0.8901 today — a new low of the year for the struggling electric vehicle maker. With a Relative Strength Index (RSI) of 32.28 and a market cap of $629.56 million, I hadn’t expected Arrival to dip much further, if at all. However, its stock still seems as though it has the potential to drop further at any moment, given the recent volatility we have witnessed.

I still don’t expect that moment to come soon. Momentum seems to be with the indexes rising before they fall, according to the technicals. And if that is the case, Arrival should rise with them. But the economy in the United Kingdom is not doing as well as the United States, so one must be careful when investing in UK-based companies such as Arrival at this time.

There arguably has never been a more difficult time to be in the market all year than now, especially if you own the UK or Chinese stocks. Most stocks on the New York Stock Exchange have been in a prolonged bear market, and for smaller capped stocks, that has not yet resulted in any considerable bounce, meaning small-cap investors have slowly run out of money and are now under immense pressure not to make a mistake in where they choose to put their money. It would have been nice if one could trust Cathie Wood, the supposed expert in small-cap stocks, but as outlined recently, one must be careful listening to her given her track record recently.

If your money was leveraged at x2 and hit a stop-loss position of around 0.8901, I would put at least some money back on immediately because Arrival isn’t likely to drop much further. But you must be careful with the spreads as you may find the next stop-loss amount closer than you had hoped. Such are the games these stock brokers of today play.

Mat Diekhake is the editor of ConsumingTech.com. He has been inseparable from the internet since Web 2.0 in 2005, and by 2008 decided on a career in IT. With a never ebbing desire to cover technology, he spends most days consumed by Windows, Linux, and Android in particular. Though he has spent innumerable hours learning consumer software in general, formally and as an autodidact, and has personally authored over 10,000 articles since 2010. He is a qualified Microsoft Windows systems administrator (MSCA). Read Mathew's full biography. Mathew's social profiles: Twitter, Facebook, Instagram, LinkedIn, and Github.
« Is Coinbase Preparing for a Breakout? – Sept 18, 2022» If You Believe In Robotaxis, You Believe In Lyft