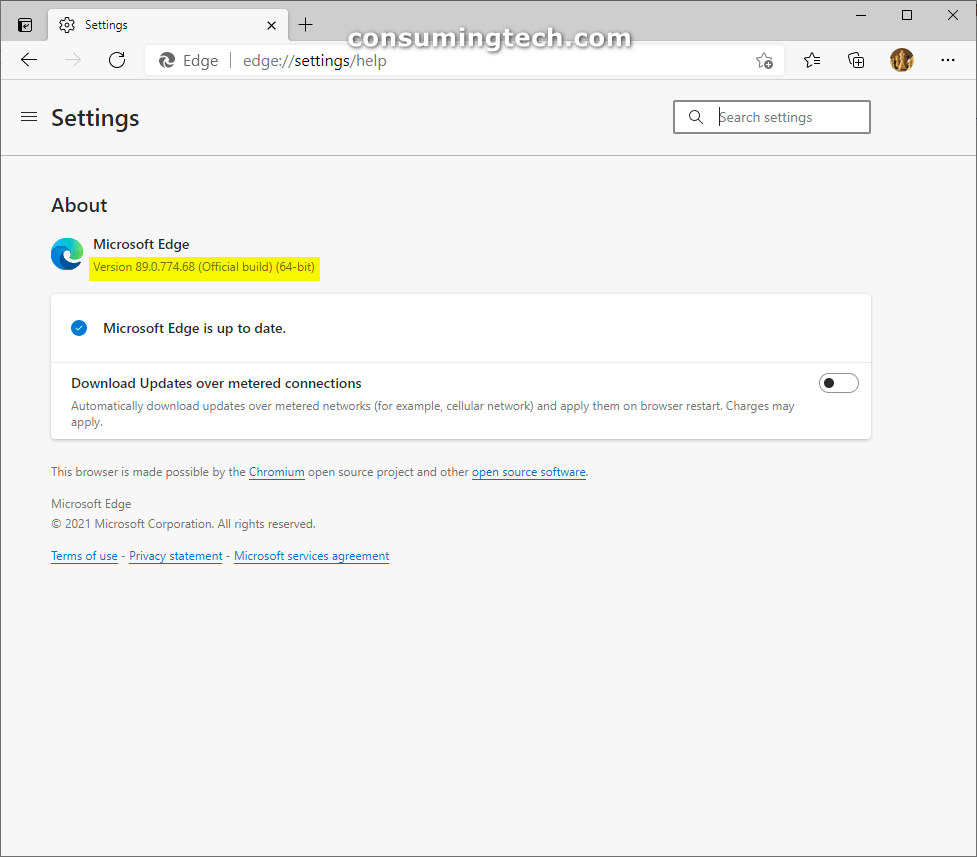 The vulnerability assigned to this CVE is in Chromium Open Source Software (OSS) which is consumed by Microsoft Edge (Chromium-based). It is being documented in the Security Update Guide to announce that the latest version of Microsoft Edge (Chromium-based) is no longer vulnerable. Please see Security Update Guide Supports CVEs Assigned by Industry Partners for more information.

Microsoft Edge 89 is based on the Chromium 89 update and comes available for both the Windows and Mac versions of the browser. Microsoft Edge 89 will automatically roll out to your browser but you can also download the files manually if you prefer.

Microsoft Edge 89 comes with several new features which include sleeping tabs, vertical tabs, and intensive throttling. Vertical tabs is arguably the standout feature here. Vertical tabs will take some time to get accustomed to because it doesn’t just allow you to better sort your tabs in the current window but will give you an alternative way of viewing the tabs in any other windows you may have open as well. For instance, if you deliberately drop a secondary window in the background as you work, you will no longer have to hover over the Edge icon in the taskbar to view that background tab anymore. Instead, you will now find the vertical tabs icon at the top of your current browser window which can be clicked instead.

If vertical tabs is the most impressive new feature, sleeping tabs would be the most controversial. This feature aims to put inactive browser tabs to sleep in an effort to reduce the CPU usage, which sounds good in theory, if only Microsoft were to definitely understand what tabs are truly sleeping and which ones are in use. For instance, we often have baseball broadcasts that can go “inactive” for hours for all Microsoft knows but indeed we are actually listening to these broadcasts while we work. Assuming Microsoft does a better job of understanding what inactivity is than say YouTube, then everything should be fine.

In addition to those welcomed features, Microsoft is also adding improvements to the native PDF reader, privacy settings, group policies, security, and more.

Mathew Diekhake is a certified Microsoft systems administrator from Australia and also the founder and editor of ConsumingTech.com. With a never ebbing desire to cover technology, he is mostly consumed by Windows, Linux, and Android. However, he has spent stacks of hours learning about a variety of computer software, both formally and informally, and has authored tens of thousands of tutorials and news articles since 2011. Mathew has obtained many Microsoft certificates and is a qualified sysadmin (MSCA). Read Mathew's full biography. Mathew's social profiles: Twitter, Facebook, Instagram, LinkedIn, Github
« Brave Browser Updated to Version 1.22.71 to Coincide with Chromium 89.0.4389.114» Microsoft Edge Stable Available for Mac M1 Users