Cortana is Microsoft’s virtual assistant that is designed to help make your life more efficient than it could be just by using the operating system without her. Your experience of Cortana can dramatically change depending on the types of people you’re surrounded by and what type of computer hardware you’ve got under the hood. Some people prefer to mock those who are willing to talk out loud to a computer or phone while those without high computer specs might not have anything against her but prefer to turn her off, so she isn’t taking up all those extra allocated hardware resources. But for a lot of people out there Cortana is becoming increasingly useful.

The Windows 10 build 18317 separates the Cortana button from the Search field so users can clearly understand that searching is for more than just Cortana-related tasks. Over the past few major releases, Microsoft has tried to emphasize the importance of search and what can be achieved from it. In addition to its additional features, this should help make it easier for people to understand that searching the operating system and with Cortana are two completely different things.

The Windows 10 build 18305.1003 update shows the Cortana icon and Search icon as two separate icons in the taskbar with each being able to be expanded when clicked on. This update was only released to a select few Windows Insiders and their AB testing. If you are an Insider, you may have been included in this AB testing that Microsoft is doing to see how people interact with the icons and whether it’s a feature that may include in future releases.

An example of the Cortana sign-in screen in Windows 10: 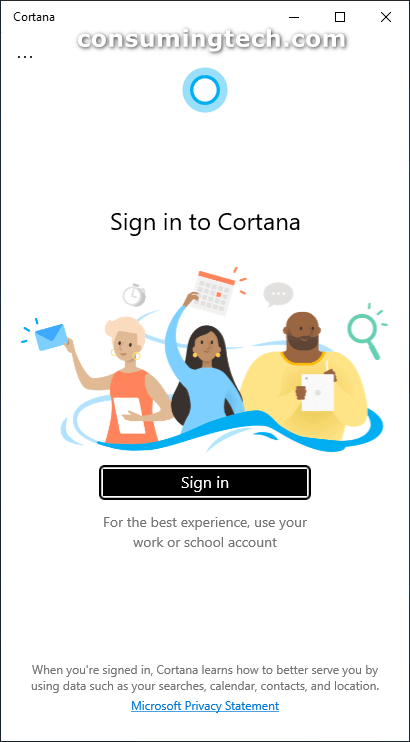 The following tutorial demonstrates how to hide and show the Cortana button on the taskbar when you’re using a version of the Windows 10 operating system.

Here is how you can hide and show the Cortana button in the taskbar from the Registry Editor application:

2. In the console tree of the snap-in, navigate through to the following keys:

3. In the right side of the Advanced key, right-click a white space and select New > DWORD (32-bit) value and then name it ShowCortanaButton. (click to enlarge screenshot below)

4. Double-click on the ShowCortanaButton entry that you created to edit its DWORD and then change the value to either 0 or 1. Selecting 0 will disable the Cortana button while selecting 1 will enable it.

You can now close the Registry Editor app and continue using your computer.

Mat Diekhake is the editor of ConsumingTech.com. He has been inseparable from the internet since Web 2.0 in 2005, and by 2008 decided on a career in IT. With a never ebbing desire to cover technology, he spends most days consumed by Windows, Linux, and Android in particular. Though he has spent innumerable hours learning consumer software in general, formally and as an autodidact, and has personally authored over 10,000 articles since 2010. Microsoft awarded him numerous certificates resulting in him becoming a qualified Windows systems administrator (MSCA). Read Mathew's full biography. Mathew's social profiles: Twitter, Facebook, Instagram, LinkedIn, Github, Reddit.
« How to Enable/Disable Cortana Immersive Floating Search Bar in Windows 10 [Tutorial]» How to Troubleshoot Cortana by Reinstalling and Re-registering Her in Windows 10 [Tutorial]