We’ve said this many times before, and it probably won’t be the last time we say it: the internet can be a fantastic place, and it can also be quite a dangerous place. There are lots of great websites out there creating great content for readers to see. Those websites can do everything with white hat techniques by displaying high-quality ads or offer subscriptions to help support their work.

And then there is the other side of the web: one where people with lots of money or geeks have turned bad, will do things like display untrustworthy affiliate links that are filled with malware or adware and will relentlessly do whatever it takes to make money, no matter what it does to the reader’s computer.

A bit like life itself, the good far outweighs the bad, but the bad does exist. There’s no real easy solution to the problem other than to educate people on how to look out for the bad, so they don’t fall victim to it. It is possible to identify what is malware or adware by trial and error. Just because you have downloaded malware or adware doesn’t mean it is the end of the world. You can get rid of everything that is on your computer. The most important thing is educating people to know how to do it.

Once you’ve seen what malware and adware do to a computer you can then easily identify it on your or someone else’s PC and get rid of it. I’ve seen many computers where people are using it with adware, and they haven’t got a clue. No wonder people hate ads online!

Adware and malware are two different things in general, but I’ve just lumped them into the “bad” category for now. It is the adware side of things that we’ll be running through in this article and how you can fix it with a tool that we’ve been using for many years now.

AdwCleaner is a tool that was once independently owned, although Malwarebytes have recently bought it. Malwarebytes has been arguably the biggest name in third-party malware programs protecting Windows PCs for a long time. They are a big deal among geeks. They aren’t such a big deal that just anybody would have heard of them, but most people in my position of writing about tech all day know them very well. They are large enough for a company to have been making lots of money, and I guess from that perspective their acquisition of AdwCleaner isn’t a surprising one.

Malwarebytes is great at keeping malware away from your computer, but the program is not cheap to buy. AdwCleaner, on the other hand, has always been a free tool, and thankfully has continued being free for people to use even after being bought out by Malwarebytes—the guys who usually charge money for their products.

Download the Adwcleaner for Windows 10 from any of the available links: Malwarebytes | TechSpot | FileHippo | MajorGeeks.

Once you’ve chosen your download file, the rest is straightforward. It will finish its downloading and become an executable file available from the bottom left side of your computer’s display, just above the taskbar. Click on that executable file—in the middle of it—so that it opens. There is no extracting required.

When clicked, you’ll then be greeted with a terms and conditions page that you’ll need to agree to for the tool to become available for you to use. Just click on the “I Agree” button. 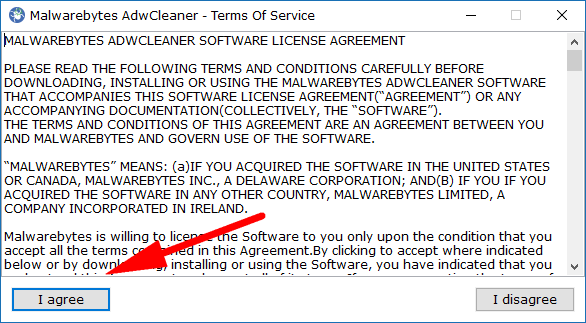 You’ll then see the AdwCleaner user interface on your computer’s screen. Click on the “Scan” button to run the scan that is required to remove the adware that you suspect is plaguing your computer. (It doesn’t seem like a button when you hover your mouse over it because the cursor icon doesn’t change, but that is, in fact, a link and can be clicked to start the scan). 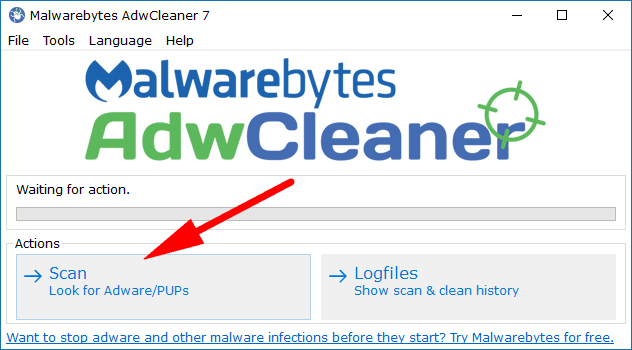 It then takes a few minutes to run the scan. The more folders you have, the longer it’ll take, but it’s a lot quicker than running an antivirus scan. 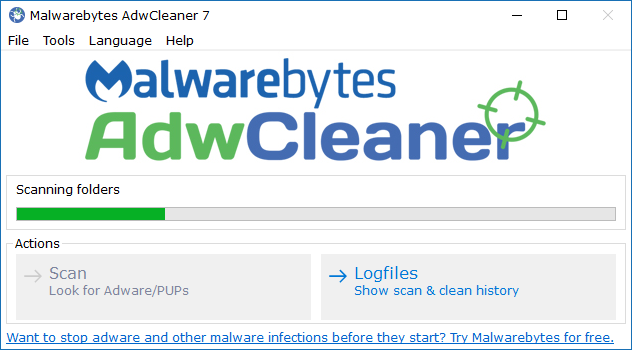 You now need to click on the “Clean” button to remove any found infections. (It says that it has found some “PUPs” which stands for Potentially Unwanted Programs and isn’t what we would refer to as adware, but they can be removed nonetheless since we don’t have any need for them). 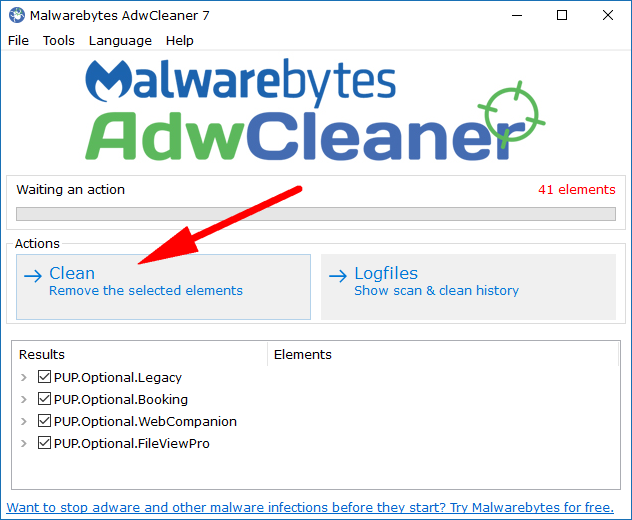 We often wince when we hear news about something being acquired by another company because it usually results in there being changes and they have a tendency to be bad changes . . . AdwCleaner is no exception. The last time we used this tool was probably well over a year ago now, and we had nothing but great memories. We gave it another try just now for this article, and there were a few annoyances. Firstly, when you click the “Clean” button to rid your computers from the found PUPs or adware, it brings up a pop-up message letting you know that everything needs to be closed. If you click on the “X” in the top right corner, it doesn’t exit the message and allow you to continue working. Instead, it closes down everything as if you clicked on the “OK” button—but you didn’t click the “OK” button, so that’s stupid. It didn’t use to be that way, but now it is. Also, when the scan has completed, it lets you know that the computer needs to restart. The older versions would allow you to restart the computer later and it would finish the scanning details then. However, with the new version that is no longer the case, it just forces you to reboot no questions asked. Luckily for us, our website automatically saved our information whenever it unexpectedly closes. If it weren’t for that, we would have lost data due to this Malwarebytes version of AdwCleaner being so presumptuous.

Mat Diekhake is the editor of ConsumingTech.com. He has been inseparable from the internet since Web 2.0 in 2005, and by 2008 decided on a career in IT. With a never ebbing desire to cover technology, he spends most days consumed by Windows, Linux, and Android in particular. Though he has spent innumerable hours learning consumer software in general, formally and as an autodidact, and has personally authored over 10,000 articles since 2010. Microsoft awarded him numerous certificates resulting in him becoming a qualified Windows systems administrator (MSCA). Read Mathew's full biography. Mathew's social profiles: Twitter, Facebook, Instagram, LinkedIn, Github, Reddit.
« How to Reset Password of Local Account or Microsoft Account in Windows 10 [Tutorial]» Free Ways to Stream Torrents Without Waiting for Complete Downloading