How to Disable Hardware Acceleration in Windows 10 Photos App [Tutorial]

Hardware acceleration is a feature used by many Windows applications to help eke out better performance. One of the fundamental differences between Windows 10’s Movies & TV app getting close to double the battery life compared to some of the competition was because Microsoft’s native app is using hardware acceleration whereas the others were not.

Microsoft uses hardware acceleration wherever it makes sense for them to do so, which is often anything that involves the use of moving graphics. This also extends out to the native Photos application in Windows 10 and its 3D effects. When you save the pictures with 3D effects, the Photos app writes the data to a video file. This uses the GPU for hardware accelerated video encoding.

Hardware accelerating sends all decoding work to the graphics processor instead of it being done with the central processing unit. The GPU can do the math on certain equations better than a CPU can, and that is what makes the hardware acceleration so much more efficient to use. However, in doing so, you’re also adding some more functions into the equation, and that means you’re also increasing the chance of something going wrong.

The same tune can be sung for the Windows 10 Photos app: leave it turned on to help your computer perform at its best, which includes helping your battery last longer, and disable it if you’re experiencing any bugs to see if it fixes the problem.

The following tutorial demonstrates how to turn on and off the hardware acceleration in the Photos app when you’re using a version of the Windows 10 operating system.

How to Disable Hardware Acceleration in Windows 10 Photos App

Here’s what you need to disable the hardware acceleration feature found in the Windows 10 Photos app.

1. You can disable the hardware acceleration from the Photos application itself. To get started, head to your Start menu and click on the Photos tile to get access to the Photos app.

2. In the top right corner of the Photos app, click on the three dotted More menu.

3. Click on the Settings gear icon from the three dotted menu. 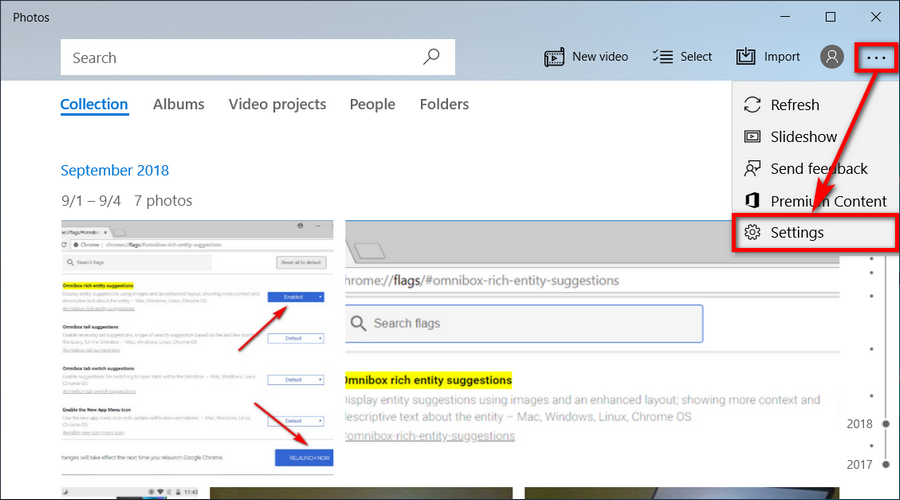 4. Scroll down until you see the Video toggle. 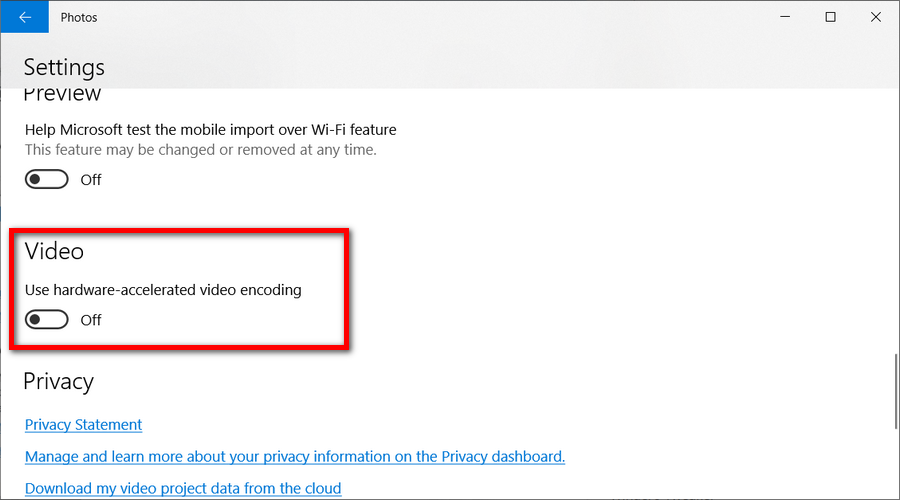 You can now close the Photos app and it’ll automatically remember your preferences. Just remember to head back to the same area should you ever want to try enabling it again in the future—Windows updates might solve the problem without you realizing if you keep it off for long periods—so you can get the most out of your hardware and battery.

Mat Diekhake is the editor of ConsumingTech.com. He has been inseparable from the internet since Web 2.0 in 2005, and by 2008 decided on a career in IT. With a never-ebbing desire to cover technology, he spends most days consumed by Windows, Linux, and Android in particular. Though he has spent innumerable hours learning consumer software in general, formally and as an autodidact, and has personally authored over 10,000 articles since 2010. He is a qualified Microsoft Windows systems administrator (MSCA). Read Mathew's full biography. Mathew's social profiles: Twitter, Facebook, Instagram, LinkedIn, and Github.
« How to Delay Windows 10 October 2018 Update Version 1809 [Tutorial]» How to Share Files and Folders Over a Network in Windows 10 [Tutorial]