They say we live roughly 20 to 30 years behind in time. Whenever I tell people this they don’t care to listen, but it’s true. I’ve seen enough video throughout my IT studies to all but confirm this. Every week or so we were shown a new documentary about tech in the classroom, much of which was intriguing, to say the least.

What makes me so confident is the striking similarities between these videos and the ones shown while studying conservation, something I did when I was even younger still. We watched videos most weeks in those classes too, and just about all were on how global warming was obviously real and how the world is going to hell in a handbasket. I’d tell people this way back then. Nobody would listen.

I can’t remember much of what I saw in these tech documentaries, but a few key points have stood with me for a decade now, one of them being that we live far behind where these tech companies want us to be. You wouldn’t believe some of the things I saw: coffee tables acting as giant tablet hubs to the home, with apps to do just about anything; paint on walls, like the small one’s featured above most people’s hotplates in the kitchen, that acted as though it were a screen that you could view information such as the weather on. Don’t believe it? You wouldn’t if you are thinking the same type of screen technology we have on devices today, but this new technology is easier on the eye and far more energy efficient. What wasn’t revealed was whether or not they were drip feeding this new technology to us on purpose. Was it just to maximize their profits by making small changes each year or was it because they had to feed us bit by bit before they could afford to advance further? Perhaps a bit of both. But one thing that is clear enough is that if the world is one day going to be anything like what these videos showed it would look 30 years from now, there are still a lot of technological advancements to come before we are anything close to what these corporations have already mapped out.

I don’t have any vivid memories of virtual reality or mixed reality from the videos I watched back in those days, but my guess is that those two things are going to be a big part of our future. Like Google Glass, they aren’t necessarily having the best of starts to their introductory phase into the world, but seldom do big changes in the way we do things take off quickly. Most petrol heads can’t stand the idea of electric cars taking over the world but give it a few decades and they will. Was there anything easier to bully a couple of decades ago than a geek and now who doesn’t know how to use computers? You don’t need to consume the world, it will eventually consume you, no matter how stubborn you are, once the majority of people have their say.

Gamers have longed for the opportunity to get as close to real life graphics as they can. That is part of the attraction of gaming: immerse yourself in a false world that looks as realistic as possible. Another interesting side of the equation that novels such as Ready Player One have introduced is that a virtual reality could also offer people a cheaper alternative to the real world, so at least they can participate in some form of life again when the going gets tough.

The one thing that is holding mixed reality back, for now, is the price tag: you’ll need to spend around $3,000 for a HoloLens, which is the only true mixed reality experience you can have with Windows up until now. As with all new technology, in time you can expect these prices to drop once more people start to use them. If you’re going to use something far cheaper, say around the $400 mark, then it’s going to be a virtual reality and not technically a mixed one like Windows 10 is currently making it out to be. The difference? Virtual reality is a place with nothing taken from our real world in it. The entire thing is just a gaming environment. The more expensive mixed reality has virtual stuff on top of the real world you know—Pokemon Go being a good example of a mixed reality that many of you will have heard about. Microsoft’s misleading name that appears as software on many computers from various manufacturers is likely because in due time they are predicting actual mixed reality headsets to be not only available but far more commonly used.

The following tutorial demonstrates how to uninstall the mixed reality portal from all versions of the Windows 10 operating system.

How to Uninstall Mixed Reality Portal from Settings App

You can uninstall the mixed reality portal directly from the Settings application in Windows 10. Here is how to do that:

1. Microsoft has made it easy to uninstall the mixed reality portal from the Settings application in Windows 10, provided that you’re running on a version of Windows that supports it. Just head to the Start menu > Settings > Mixed Reality. (click to enlarge screenshot below) 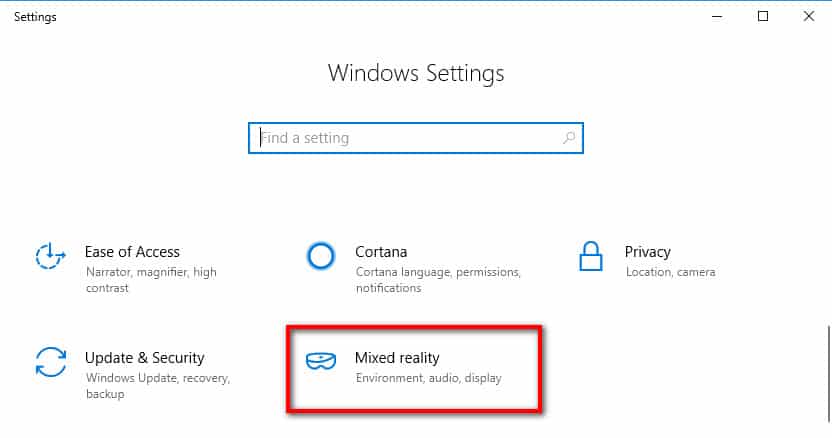 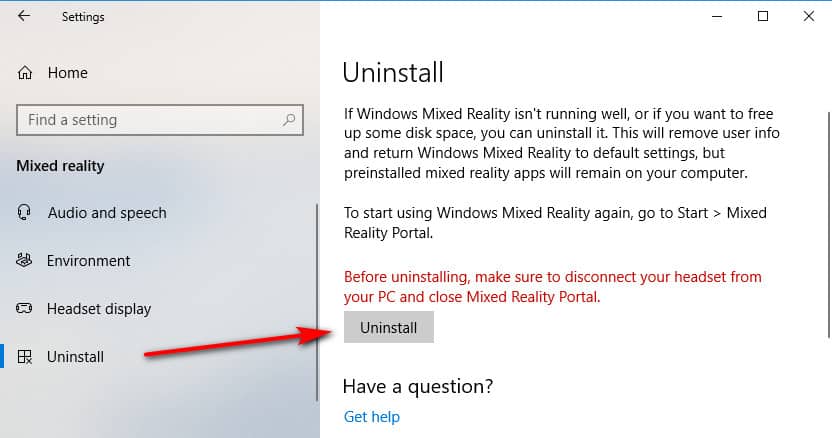 The mixed reality portal will now be uninstalled from your edition of Windows 10.

How to Uninstall Mixed Reality Portal from Registry

You can uninstall the mixed reality portal from the Registry Editor application in Windows 10. Here is how to do that:

1. Open the Registry Editor by pressing the Windows logo + R keys to open the Run dialog and type Regedit and hit the OK button.

Click on the Yes button if you are prompted by User Account Control before it will allow for the opening of the Registry.

2. Using the left side pane of the Registry Editor’s window, navigate to the following path by double-clicking on each of the keys. (click to enlarge screenshot below) 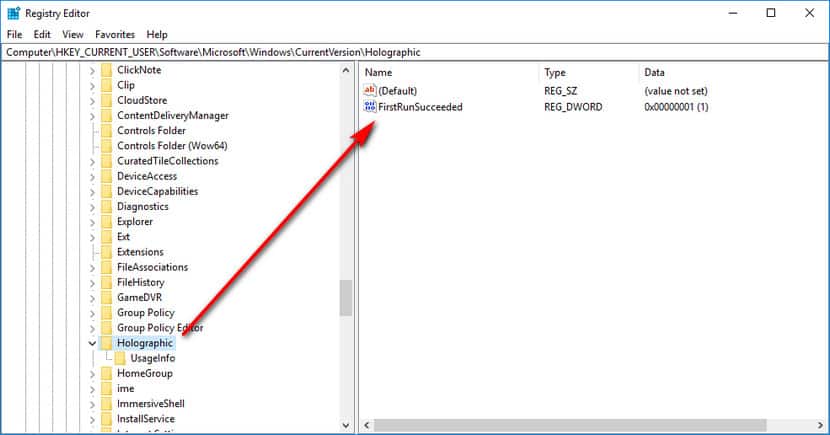 3. Once you’ve double-clicked the mouse on Holographic from the left side pane, double-click on the FirstRunSucceeded enter in the right side pane. 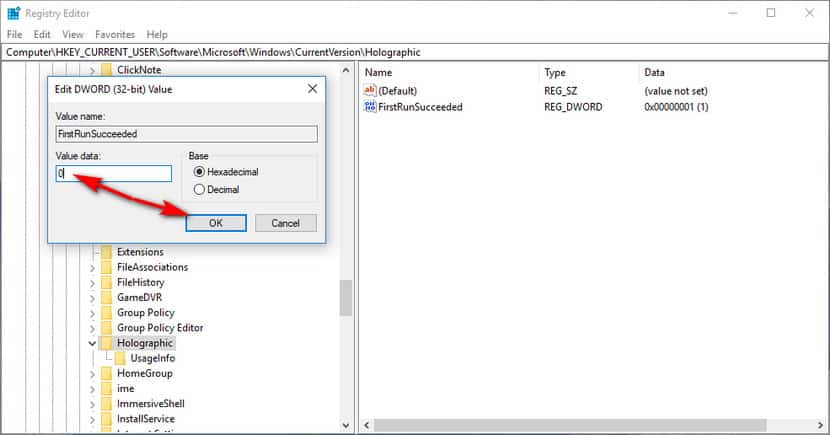 How to Reinstall Mixed Reality Portal in Windows 10

If you want, it’s still possible to get the mixed reality portal back on your version of Windows 10 in the future. Here are the way you do achieve it:

1. You can reinstall the mixed reality portal by going into the Registry Editor and changing the value data back to 1 again, following the same steps as the guide above for uninstalling it in the registry.

2. The alternative is to download it from Microsoft. Visit the installation page for the Windows mixed reality to find the download link.

The mixed reality portal is about 1 GB in size, so you’ll need that space freed up on your machine before you get started. There are hardware requirements that will limit the numbers of computers that it can be installed on as well. You can find out what they are from the same downloads page from the Microsoft website, as listed above.

Mathew is a qualified Microsoft Windows systems administrator (MCSA) who has covered OSs, browsers, the internet, and related tech since 2011. He is the founder and editor of ConsumingTech.com and is a freelance tech writer for various publications around the Web. Mathew graduated from DDLS Melbourne (now Lumify). He grew up in Melbourne and lives in rural Victoria, Australia. Read Mathew's full biography. Mathew's social profiles: Twitter, Facebook, Mastodon, Instagram, LinkedIn, and Github.
« Disable Windows SmartScreen in Windows 10» Remove Details Tab from File Properties in Windows 10