How to Delete Older Versions of File History in Windows 10

File History is an application, that when turned on, will continually back up the files it finds on your desktop, in your libraries, in your Favorites folder, and your Contacts folder. If you leave File History on its default settings, it will back up these locations every hour, though you can change the amount of time you wish to elapse between backups to be as long as only once per day if you prefer. The backups can only occur for as long as you have the external hard drive or USB thumb drive connected to the computer; File History will not back up to the existing locations on the computer; it perceives them as useless locations to store backups since the point of a backup is in case your existing drives fail. File History will not ever erase files and folders that were previously saved to the drive; everything File History saves is saved to its own unique folder called “FileHistory.”

You can use File History similarly to how System Restore would work in the sense that you can restore older versions of your files if they were to become corrupted or are accidentally deleted. By default, File History stores one year’s worth of your backups; for some, this offers a lot of security and is set to the right amount of time; for others, one year is going to require too much storage space. Thankfully, you can change the time that File History will store your backups. Whatever time you choose, you will need to understand that that will be the maximum amount of time you can find older versions of your files. For instance, choosing only one month of File History backups means that any files older than a month will no longer be stored on the computer via File History.

The following tutorial demonstrates how to delete older versions of File History when you are using a version of the Windows 10 operating system.

Note: There will be an automatic additional 26 characters added to the full path of the backup. The maximum full path that Windows 10 allows for is a total of 210 characters. This means any file with a path longer than 185 characters will not be backed up.

3. Click on Advanced settings from the left side of File History. (Click to enlarge the screenshot below.) 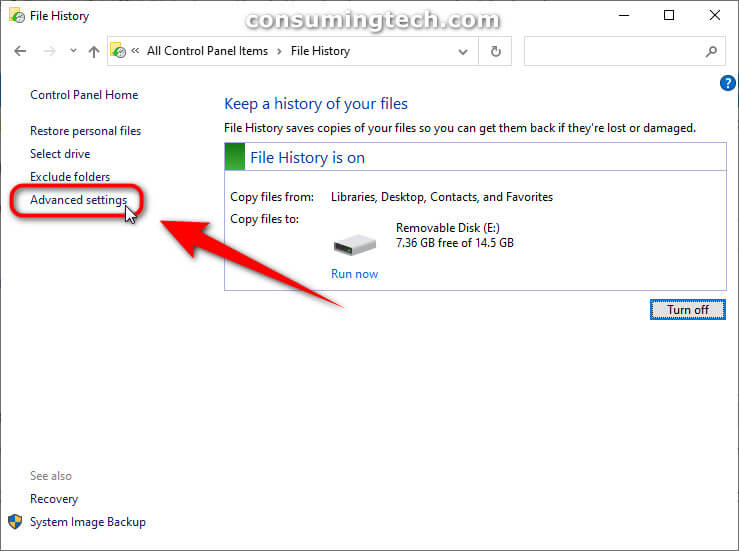 4. Under the Keep saved versions: heading, click on the Clean up versions link, which is available beneath the drop-down menu. (Click to enlarge the screenshot below.) 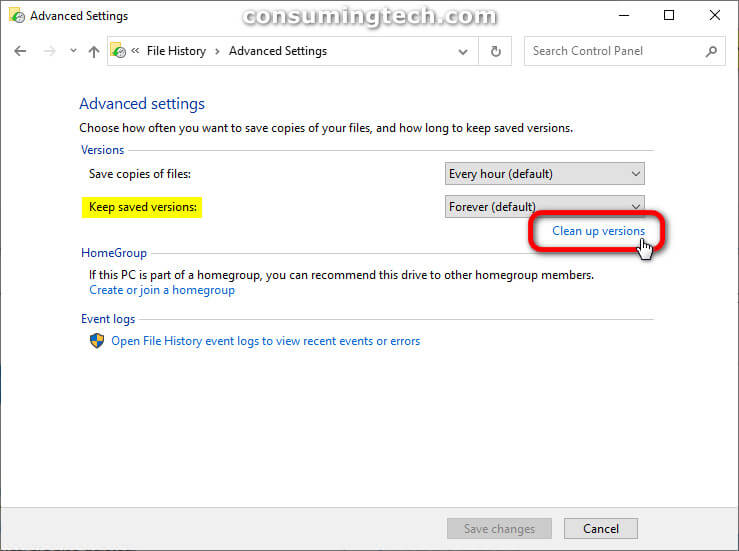 5. From the drop-down menu beneath the Delete files: heading, select the period of time (e.g. Older than one month) you would like File History to wait before backups are deleted. 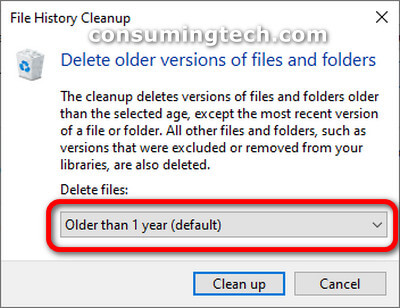 6. The default is one year. The longer you keep the backups stored on your computer, the more chance you will have of of the backups retaining the information you need. However, it does come at a cost, which is you need to store those backups. If you use your computer regularly, you probably don’t need to be storing backups for anything close to a year, because you will notice a problem well before then.

7. Once you have chosen your preferred time period, click on the Clean up button. 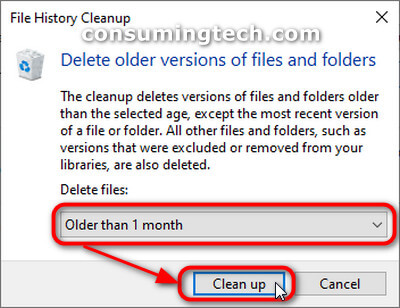 Method Two: How to Delete Older File History Versions of Files and Folders via Command Prompt

2. Type the following command into the command line within the Command Prompt window, and then press the <Enter> key on your keyboard to execute it. (Click to enlarge the screenshot below.)

Delete All Older Than One Month:

Delete All Older Than Three Months:

Delete All Older Than Six Months:

Delete All Older Than Nine Months:

Delete All Older Than One Year (Default):

Delete All Older Than Two Years:

3. If Windows 10 doesn’t find any versions of File History backups that were old, you will get a message stating We didn’t find any versions of your files that were old whereby you would then need to click on the Close button to close the dialog. Alternatively, if the File History cleanup was performed successfully, you will get a message stating The cleanup completely successfully and you can click the OK button.

Mat Diekhake is the editor of ConsumingTech.com. He has been inseparable from the internet since Web 2.0 in 2005, and by 2008 decided on a career in IT. With a never-ebbing desire to cover technology, he spends most days consumed by Windows, Linux, and Android in particular. Though he has spent innumerable hours learning consumer software in general, formally and as an autodidact, and has personally authored over 10,000 articles since 2010. He is a qualified Microsoft Windows systems administrator (MSCA). Read Mathew's full biography. Mathew's social profiles: Twitter, Facebook, Instagram, LinkedIn, and Github.
« How to Select Drive for File History in Windows 10» How to Turn On/Off File History in Windows 10