I have heard that Microsoft is considering doing away with System Restore. After looking into it, my System Restore was turned off by default. This didn’t look positive for restoring my computer in future Windows 10 updates, so I have decided to look elsewhere for backup solutions. I have heard of third-party software such as Macrium Reflect, but would rather something simple and that is also a default backup solution, still made by Windows. I know that Macrium’s software is highly regarded, but I don’t want to spend much time with the backups; I prefer a one-click solution that doesn’t take any effort to set up. Resolution:

Now that Windows 10 is here, it is somewhat unusual that no default programs are backing up your files. That said, one of the primary concerns a modern-day computer has always had is the sheer size of the data that is on a hard drive and thus would need to be backed up. Given the complexities of storage space along with its costs, it does make sense for backing up to become a separate optional feature for those who rely on it; and Microsoft has done a decent job at providing you with File History, which is a reliable backup feature that will only run once you have connected an external hard drive to the computer, be it a dedicated literal external drive or something that resembles that of a USB thumb drive.

File History is an application, that when turned on, will continually back up the files it finds on your desktop, in your libraries, in your Favorites folder, and your Contacts folder. If you leave File History on its default settings, it will back up these locations every hour, though you can change the amount of time you wish to elapse between backups to be as long as only once per day if you prefer. The backups can only occur for as long as you have the external hard drive or USB thumb drive connected to the computer; File History will not back up to the existing locations on the computer; it perceives them as useless locations to store backups since the point of a backup is in case your existing drives fail. File History will not ever erase files and folders that were previously saved to the drive; everything File History saves is saved to its own unique folder called “FileHistory.”

The following tutorial demonstrates how to backup files and folders via File History when you are using a version of the Windows 10 operating system.

Method One: How to Manually Create File History Backup in Settings

2. From the left side of the Update and Security menu, click on Backup, and then under Back up using File History click on the More options link. (Click to enlarge the screenshot below.) 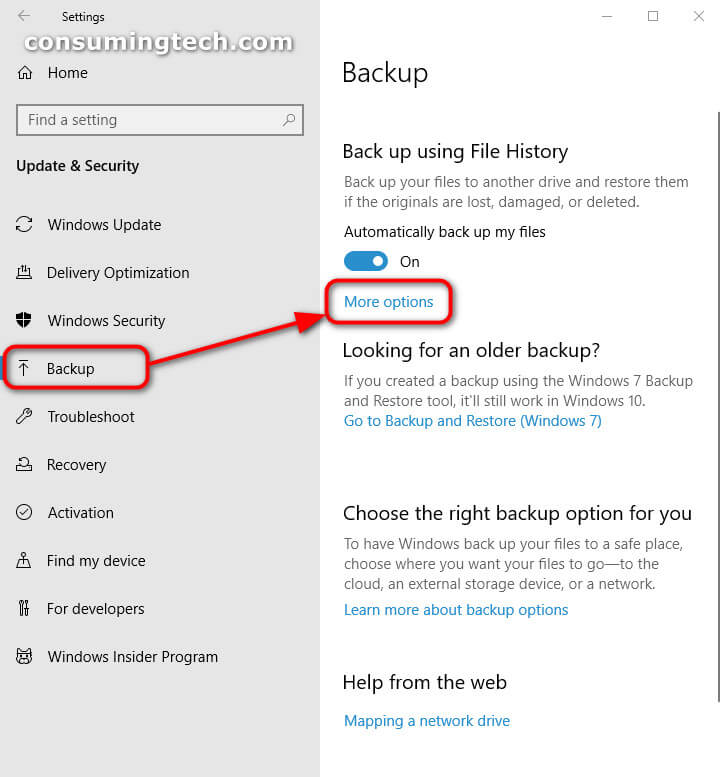 3. Under the Overview heading, click on the Back up now button to begin taking a File History backup for your computer. (Click to enlarge the screenshot below.) 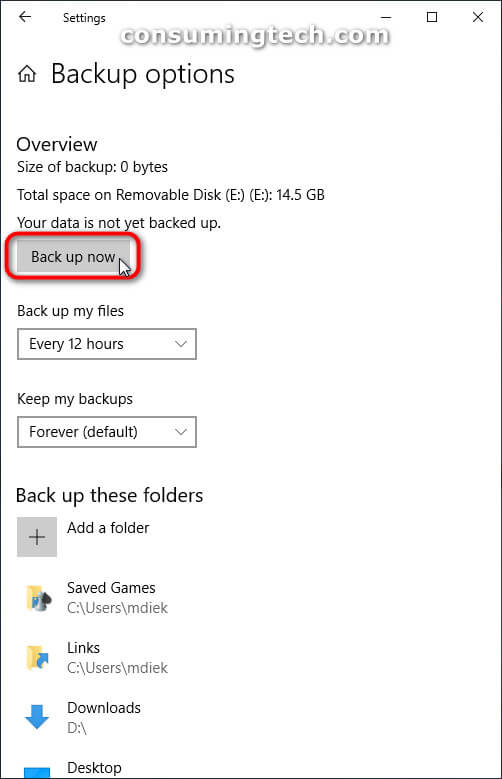 When Windows 10 starts taking the backup, it lets you know this by stating it is Backing up your data…. directly above the button that allows you to cancel the backup. (Click to enlarge the screenshot below.) 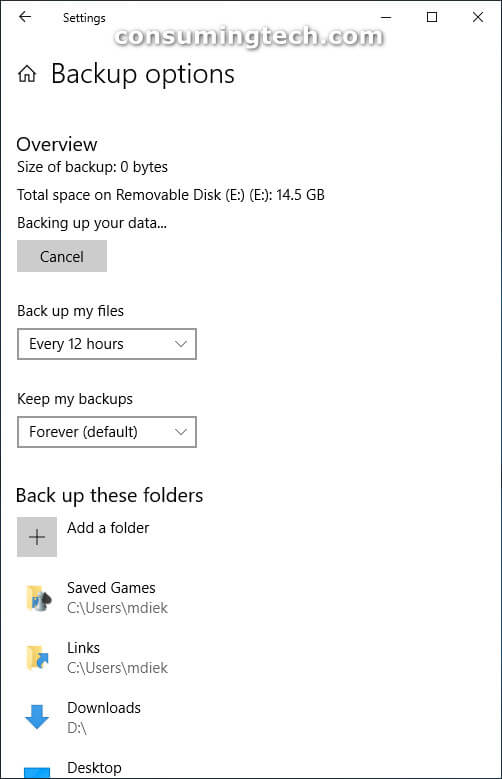 You can now close the Settings app and continue using the computer.

3. Within the box where it lets you know that File History is on, click on the Run now link that is located toward the bottom of the same box. (Click to enlarge the screenshot below.)

Note: If you do use a USB thumb drive as opposed to a dedicated external hard drive, just make sure your thumb drive has enough space on it to handle the full backup of your contents. For a lot of people, thumb drives will be unrealistic for trying to backup everything that is on a computer. (Click to enlarge the screenshot below.) 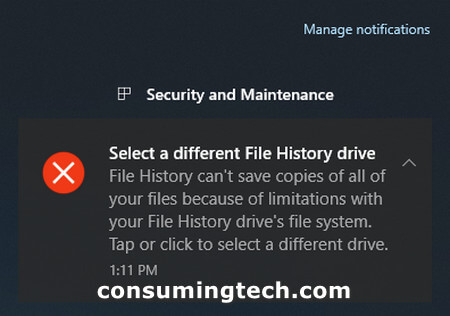 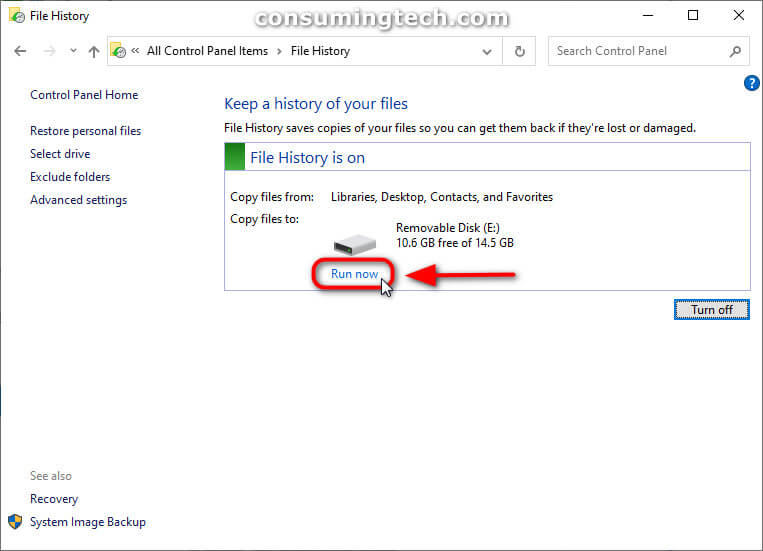 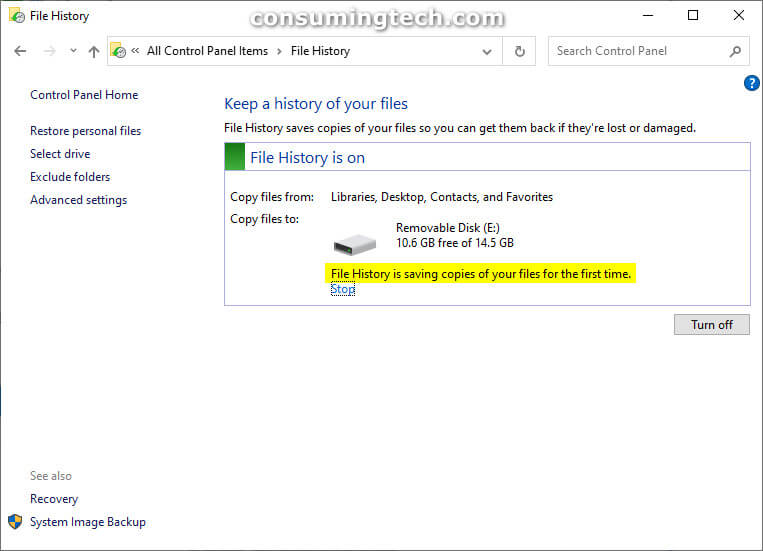 You can now close the Control Panel and continue using the computer.

Mathew is a qualified Microsoft Windows systems administrator (MCSA) who has covered OSs, browsers, the internet, and related tech since 2011. He is the founder and editor of ConsumingTech.com and is a freelance tech writer for various publications around the Web. Mathew graduated from DDLS Melbourne (now Lumify). He grew up in Melbourne and lives in rural Victoria, Australia. Read Mathew's full biography. Mathew's social profiles: Twitter, Facebook, Mastodon, Instagram, LinkedIn, and Github.
« See List of All Available System Restore Points in Windows 10» Change How Often to Save File History in Windows 10