The Barnes & Noble NOOK HD+ is a 9-inch tablet that started off running on the Android 4.0 software update out of the box. Since this isn’t a tablet from one of the largest manufacturers in the world, it didn’t receive many Android software updates after that. In fact, according to our sources, it hasn’t received any official update that would have taken it up to Android 4.1 Jelly Bean. A lack of software updates is often what deters people from buying into one of these cheaper tablets that seem like such a great deal at the time of shopping for it. Unfortunately, many unsuspecting customers don’t know that is a downfall to these particular devices that seem priced to sell.

One of the upsides with the Barnes & Noble Nook HD+ is that it proved to be a popular device and that means third-party developers are creating custom ROMs for it. A device always comes with a ROM—in this case, it is the stock Android ROM that was running when you first opened it out of the box. A custom ROM allows you to swap that stock version of Android ROM with a custom ROM. The single most popular reason for installing custom ROMs is to update to newer versions of Android. Third-party developers have the ability to reciprocate the features that they learn from a more recent version of Android that was an official update on other device and developer than on a custom ROM that is made for your device that did not get updated officially to that same newer version of Android. Thus, you can run a more original versions of Android on the Barnes & Noble Nook HD+ tablet by using a custom ROM. 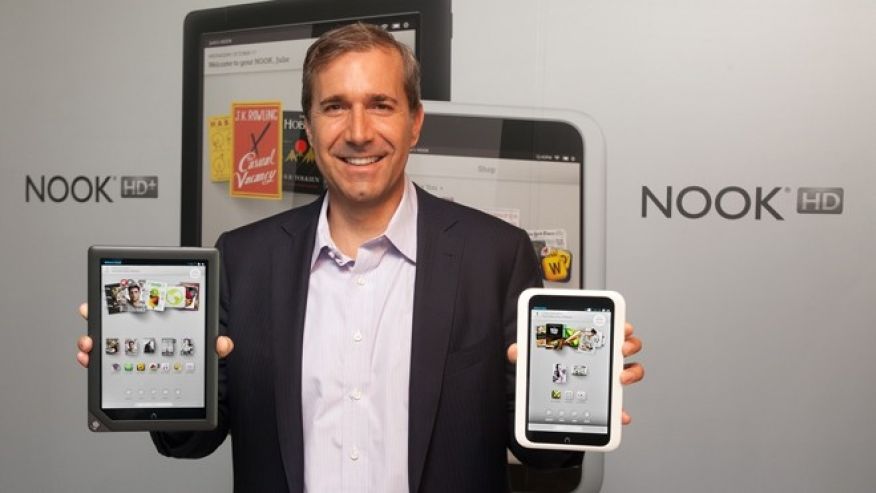 While updating to a more recent version of Android that did not roll out or your device officially is the main reason for installing a custom ROM on a device, it is not the only reason. Many times a custom ROM offers something different from the stock version of Android too. For example, sometimes you can find ROMs that had taken away the stock apps and left you with nothing but the version of Android that Android had developed before it was then handed over to the phone carrier networks and manufacturers. Other times you can find ROMs that come with entirely different features and different designs to what Android intended you to have. That opens up new avenues for you to experiment with different designs that you find more appealing and different features and UI experiences that better suit your lifestyle. In short, new ROMs are there for more niche markets.

CyanogenMod is no longer a brand name that is making custom ROMs since the company went bust a few months ago. As such, you won’t be seeing the CyanogenMod names anymore with custom ROMs. A group of people who are from the CyanogenMod team has gotten together to provide the source code work still. You will see the new source code under the Lineage OS name instead.

The CyanogenMod 12.1 update is based on the Android 5.1 Lollipop software update and not the first Android 5.0 Lollipop update that CyanogenMod 12.0 was based on. With it comes with the same features that you would expect to find in the official jump up from Android 5.0 to Android 5.1. The difference between the two updates includes some bug fixes with the overviews screen, ability to join WiFi networks from the Quick Settings screen, high-definition voice calls, multiple SIM card support, an improved notification system to help replace the Silent Mode that was stopped in Android 5.0 Lollipop.

If you aren’t interested in installing any of the other custom ROMs available on the list, and you did want to try an even newer version of Android, then you might be interested in checking out the Marshmallow & Nougat AOSP/CM/Lineage ported ROM options that are available for the Nook HD & HD+ tablets. Even though the Nook HD+ started with the Android 4.0 Ice Cream Sandwich update, there are developers out there managing to get this device running on the latest Android 7.0 Nougat software update.

Android 7.0 Nougat comes with Unicode 9.0 with emoji and skin tone support, so you don’t have to just have yellow faces with your emojis, option to display color calibration, opportunity to screen zoom, option to switch apps by double tapping in overview button, Settings app navigation drawer, Picture-in-picture support for Android TV, Improvements to file browser, Daydream virtual reality platform, Added the “Clear All” button in Overview screen and more. Android Marshmallow came with roughly the same amount of features as the Nougat update. Some of the highlights of Marshmallow include Automatic full data backup and restore for apps, Application search bar and favorites, Contextual search from keywords within apps, Doze mode to reduces CPU speed while the screen is off to save battery life and Native fingerprint reader support.

The MoKee custom ROM is an Asian-based ROM that is a very well known custom ROM that heaps of people love to install. MoKee builds often available for a lot of devices and not just the Nook tablets. MoKee is one of the few custom ROMs that you can install that isn’t to do with CyanogenMod or an unofficial build.

The version of the MoKee custom ROM that is available for the Barnes & Noble Nook HD+ is based on the Android 4.4 KitKat software update so it’s an older ROM compared to some of the others available which have kept its popularity down in comparison to some of the others available to install. Making matters worse, many people didn’t think too highly of the Android 4.4 KitKat software updates for devices, so it doesn’t appeal to everyone even if it was an up to date version of Android available.

As far as the official custom ROMs go, the PAC-Man custom ROM is probably the best one to install on the Barnes & Noble Nook HD+ tablet. PAC-Man is a bigger name in the world of ROMs than MoKee, and it’s also based on a newer version of Android: Android 4.4.4 KitKat instead of the earlier Android 4.4 KitKat software update. There wasn’t a heap of features to change the two versions, but you do get security enhancements and bug fixes, better application compatibility, improvements to autofocus, refreshed Dialer app interface, camera application now loads Google+ Photos, as well as a few other minor changes.

The PAC-Man ROMs are best used on smartphones that have a decent amount of power or tablets. Tablets are typically more powerful than smartphones because they are larger and used for things like watching video lots more than smartphones thanks to the additional screen real estate. PAC in PAC-Man is an acronym for a mixture of Paranoid Android, AOKP, and CyanogenMod—taking a bunch of the best features from each. As such, the ROMs are very feature-rich and need to use up resources for them to run. These are not the lightest ROMs to run, but they are without question one of the best custom ROMs to install if looks and features are more you things instead of just a debloated ROM that makes the battery last longer. It all depends on your motives for installing the custom ROM in the first place as to whether or not you will enjoy having the PAC-Man ROM installed.

There is also a CyanogenMod 11 update available for the Barnes & Noble Nook HD+ tablet. The title of the XDA-Developers thread doesn’t suggest that this is an official build, but the assumption is that it is not an official version. What we can tell you is that the CyanogenMod 11 custom ROM available here is one of the most popular downloads for the Barnes & Noble Nook HD+ tablet. Over half a million people have installed this ROM on their devices.

CyanogenMod doesn’t bother to set up a web page that offers insights into the features they put into their ROMs, so the only way you can research what these ROMs have regarding features is by reading about it from other websites. According to other sites, CM 11 comes with the screen off gestures, clear Recents button, privacy guard, hardware/software buttons(CM11S exclusive) features that make it better than anything before it.

Mat Diekhake is the editor of ConsumingTech.com. He has been inseparable from the internet since Web 2.0 in 2005, and by 2008 decided on a career in IT. With a never-ebbing desire to cover technology, he spends most days consumed by Windows, Linux, and Android in particular. Though he has spent innumerable hours learning consumer software in general, formally and as an autodidact, and has personally authored over 10,000 articles since 2010. He is a qualified Microsoft Windows systems administrator (MSCA). Read Mathew's full biography. Mathew's social profiles: Twitter, Facebook, Instagram, LinkedIn, and Github.
« Best Custom ROMs for Verizon Samsung Galaxy S4» Best Custom ROMs for Barnes & Noble Nook HD