The Barnes & Noble Nook HD got recognition for being the lightest 7-inch tablet available in not just the United States but the markets right around the world. That’s a pretty big feat for a brand that is not one of the largest tablet makers in the world. Weighing just over 315 grams, the Nook HD sure was light, and the TI OMAP4470 system chip was even a decent one to have running under the hood. But the Nook HD tablet wasn’t without its issues: there was no front-facing camera, no camera available on the back either, pretty low in RAM memory, no GPS, and didn’t offer support for automatic screen brightness to help adjust to the specific lighting that was available to your room.

Fans of custom ROMs know that a custom ROM often offers different features to what was already on the device. Moreover, a custom ROM can provide features that some devices specifically did not ship with. For example, it’s plausible to think you could find a custom ROM for the Nook HD that fixes the issue of the tablet not having enough RAM. You might even find a solution for it not having automatic screen brightness. 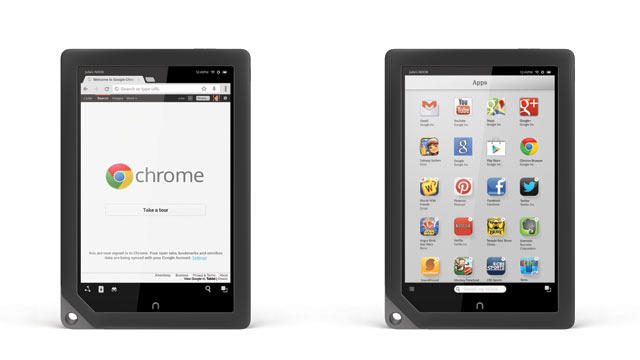 Above all, people love installing custom ROMs like the ones you can find on this list for the sake of being able to update to newer versions of Android. Android is an operating system, and each year it gets updated with major upgrades. Those updates only last for a few years before the device will no longer be supported officially. That’s when people can check out what is available from the custom ROM side of things because there are often third-party developers out there working hard to offer the newer versions of Android that were never released officially for people to install unofficially with custom ROMs instead.

The unofficial CyanogenMod 12.0 is one of the best custom ROMs for the Barnes & Noble Nook HD tablet. The CM 12.0 ROM is based on the Android 5.0 Lollipop software update, making it a newer version of Android than any of the official updates that rolled out for this device over the air before they came to a close. The Cm 12.0 build here is listed as not being good enough for your parents Nook HD tablet because of potential bugs, but it should be good enough for anyone who is not a novice user. And that’s often the problem you get with these unofficial builds. They are called unofficial because the official team hasn’t created the ROM for the Barnes & Noble Nook HD tablet. That doesn’t mean a bunch of people from the Android community has made this ROM, but it does say that an official CM 12.0 has been ported from another device to work on this one and that is the part that third-party developers not associated with the CyanogenMod team have done.

The main differences between Android 5.0 and the Android 5.1 Lollipop software update include improvements and bug-fixes to the Overview screen, support for multiple SIM cards, can now join Wi-Fi networks and control Bluetooth devices from the Quick Settings menu, Improvements to the notification priority system to help bridge the gap created by the lost Silent Mode, high-definition voice calls and a new form of device protection.

Before the CyanogenMod 12.0 and 12.1 was the CyanogenMod 111. The version here is based on the Android 4.4 KitKat software update whereas the other two were based on versions of the Android Lollipop update. Even though the Android KitKat is the older version of Android to run, there are many people out there who preferred running on the KitKat version over the more recent Lollipop—and that’s perfectly normal. Just because something is newer doesn’t mean that you have to like it more. The same rule applies to anything out there in life that you choose to own. Take cars, for instance, that constantly get updated with new designs every year. Those newer designs are not necessarily any better. It’s more that designed have no choice but having to change the design to something different. That can get more complicated more you look into it because these car designs also manipulate us to a certain extent by thinking many years head and then gradually creating a car that moves in that direction over time. But if you were to ask a designed what is their favorite looking car, don’t be surprised if you get an answer that equals a car from about a decade ago.

Not everyone was a fan of Android 4.4 KitKat though. Some people outright hated the design and couldn’t stand looking at it. You might want to check out some screenshots of Android KitKat before installing this one just in case you are one of them. If you don’t mind the design, Android 4.4 KitKat has a lot to offer by way of features. All up, there are 38 features worth noting between versions Android 4.4 and Android 4.4.4 KitKat that make it different from the Android 4.3.1 Jelly Bean software update that was available before KitKat.

We often say that the device you are installing the PAC-Man custom ROM on the need to have a decent amount of power behind it or else the experience isn’t very good. Instead of the repeating the same thing yet again, we’ll add something different: the “PAC performance” is a feature that the PAC-Man ROMs possess and that handles the performance needs on your ROM. It’s one of the few unique features that PAC-Man ROMs have that aren’t features taken from the three custom ROMs that it is based on.

Another unofficial custom ROM that has been ported from another device, the Carbon ROM is based on the Android Open Source Project. The goal is to create an uber fast and super reliable custom ROM for people to use by choice in place of what the Android version that is running on your device out of the box can offer. Inside the Carbon ROM for the Barnes & Noble Nook HD is featured from Paranoid Android, Slim ROMs, and CyanogenMod.

Most people who follow custom ROMs closely have already heard of the name LiquidSmooth. This is a team that makes custom ROMs for many devices out there and across most smartphone or tablet manufacturers. They love to cover the big names—the flagships out there from brands like LG, Sony, and Samsung.

The name LiquidSmooth says all you need to know about these ROMs: they offer an experience that runs with as few performance issues as possible. The LiquidSmooth custom ROMs have a hardcore following, and some people would never settle for anything else running on their devices as soon as they get a chance to flash a custom recovery image.

Mat Diekhake is the editor of ConsumingTech.com. He has been inseparable from the internet since Web 2.0 in 2005, and by 2008 decided on a career in IT. With a never-ebbing desire to cover technology, he spends most days consumed by Windows, Linux, and Android in particular. Though he has spent innumerable hours learning consumer software in general, formally and as an autodidact, and has personally authored over 10,000 articles since 2010. He is a qualified Microsoft Windows systems administrator (MSCA). Read Mathew's full biography. Mathew's social profiles: Twitter, Facebook, Instagram, LinkedIn, and Github.
« Best Custom ROMs for Barnes & Noble Nook HD+» Best Custom ROMs for AT&T Samsung Galaxy S6