Choose What Control Panel Applets Get Shown in Windows 10

The Control Panel is still around in Windows 10, and it has some features that you won’t find available from the new Settings application.

Having a lot of the same features split between the two areas has some thinking that the Control Panel will soon be killed off for what is meant to be a more user-friendly experience coming to you in the Settings app. But then again, Microsoft is no stranger to having multiple ways to do things, and when your software plays up and prevents you from being able to move in a certain direction, having backup plans is never a bad idea. Also, technically speaking, there will always be a quicker way to get to where you want to go based on where you currently are in the Windows operating system if you have more than one way to do something, so more options also means a more efficient tour around the OS if you’re familiar with all the ways to do the tasks at hand.

If you consider the current state of the Settings app and Control Panel a mess and wish to do some spring cleaning on Microsoft’s behalf, you are able to do that. You can hide pages from the Windows 10 Settings app so you only see the entries you want to see. Or, if you like, you can show only certain Control Panel applets in Windows 10 as well. This is ideal for anyone who wants to only have the applets that can’t be accessed from other areas of Windows 10.

The Windows Control Panel has been around for many years now, and most Windows users will know it very well. There were a couple of problems with it though: it wasn’t as user-friendly as it could have been and it was never designed for the touch displays that we have on some devices now. As we head into what appears to be touch-friendly times, the new Settings app is designed to give you everything that the Control Panel lacked. With that said though, the Control Panel itself isn’t without its changes in Windows 10 either. There are quite a few differences between the Control Panel you see now in the up to date Windows versions and the Control Panel from Windows 8.1.

Windows Update: You won’t find Windows Update from the Control Panel now. It’s shifted to the Settings app, and it comes with a revamped interface as well. Most people never knew much about Windows Update in earlier versions of Windows. Now it’s become much more prominent.

Notification Area: You’ve always been able to choose what icons appear in the notification area (system tray) from the Control Panel. Now in Windows 10, you get the same options, but they’ve shifted to the Settings app. You can find them now under System > Notifications & actions.

Family Safety: You used to be able to set up child accounts from the Control Panel. That is now removed, and you’ll find the same account options from the Settings app, under Account settings.

Here is what you need to add or remove Control Panel applets when you’re using a version of the Windows 10 operating system.

To get started, open the Registry Editor application. 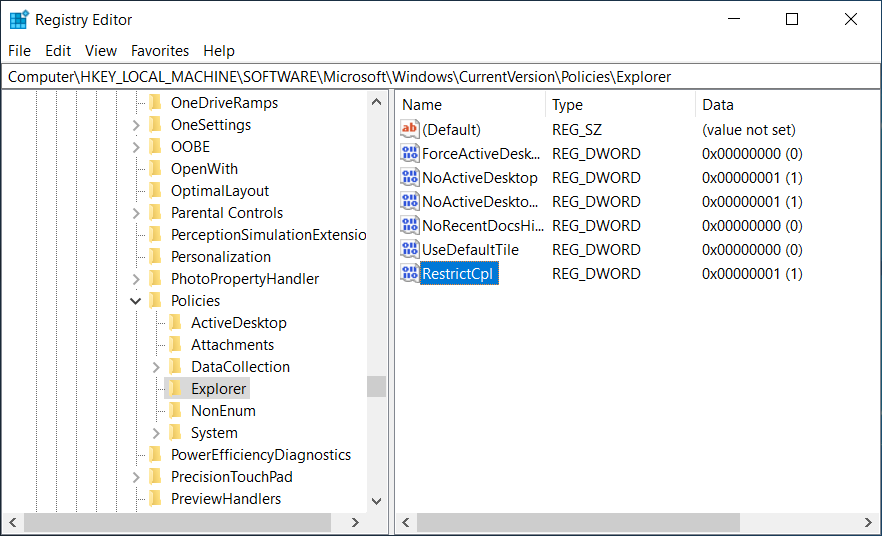 Once you’ve expanded the Explorer key, right-click in the right side pane and choose to create a new 32-bit DWORD value.

Name your new value  RestrictCpl and then set its value to “1.” 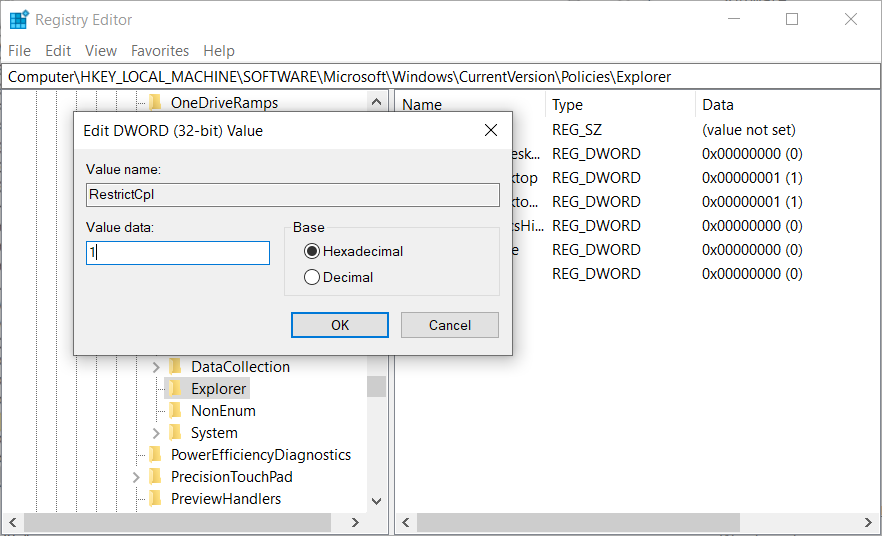 Once you’ve expanded the new RestrictCpl key, right-click on its right side pane and then create a new string (REG_SZ) value and name it “1.”

Set the REG_SZ value to the name of the applet that you want to show. 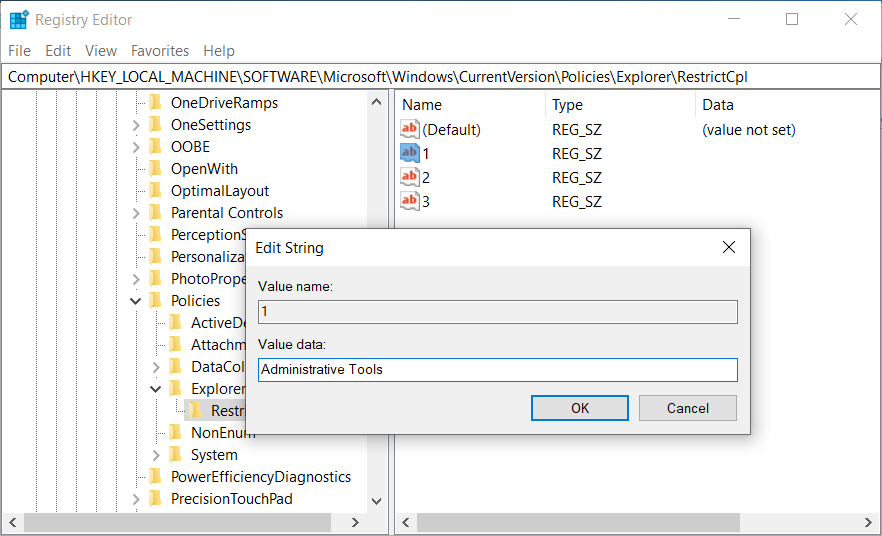 You now have one applet. Repeat the same process for the rest of the applets that you want to include to make up your complete new Control Panel set of applets. Each time you need to set a new value, increase the number by one, i.e., 1, 2, 3, 4, 5, 6, etc.

How the Control Panel looked before getting started: 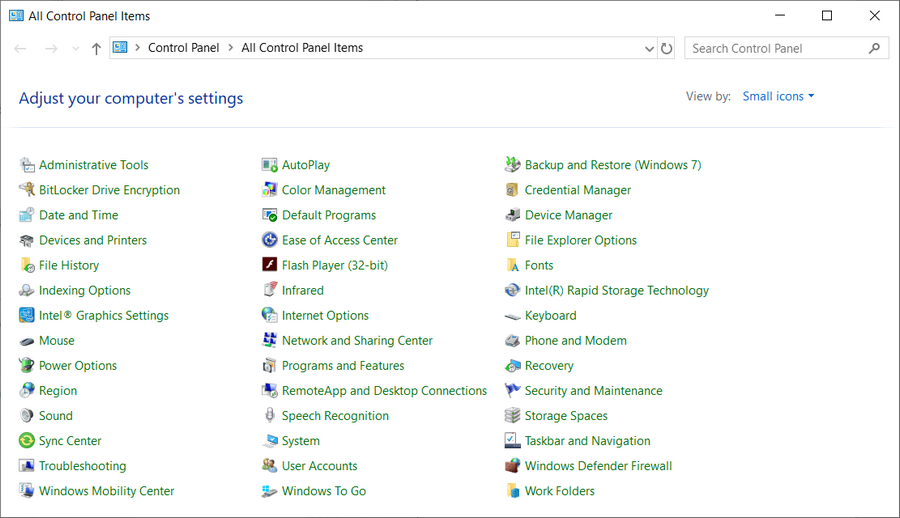 How it looks now: 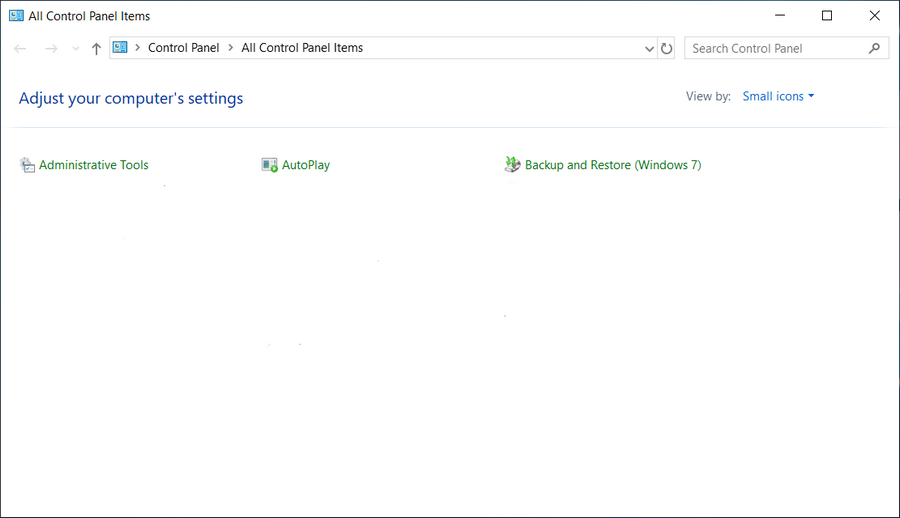 Mathew is a qualified Microsoft Windows systems administrator (MCSA) who has covered OSs, browsers, the internet, and related tech since 2011. He is the founder and editor of ConsumingTech.com and is a freelance tech writer for various publications around the Web. Mathew graduated from DDLS Melbourne (now Lumify). He grew up in Melbourne and lives in rural Victoria, Australia. Read Mathew's full biography. Mathew's social profiles: Twitter, Facebook, Mastodon, Instagram, LinkedIn, and Github.
« Open and Use Registry Editor in Windows 10» Allow/Block Access to Microsoft Store App in Windows 10