Many types of Bluetooth devices can be used with Windows 10—mice, keyboards, wireless headphones, speakers, so forth. Before you can use them, though, you will need a Bluetooth enabled computer. Most modern computers, including all different types of laptops and two-in-one devices, come with Bluetooth already built-in. If you’re still using a computer that doesn’t have Bluetooth, it is possible to buy a Bluetooth adapter and plug it into the USB port of the PC, and you can start using Bluetooth devices that way instead.

Bluetooth is a wireless technology standard used for exchanging data between mobile devices and computers that are within close range of each other. Bluetooth is a standard wire-replacement communications protocol, used for low power consumption devices such as computer mice and wireless earphones.

Bluetooth was developed by Bluetooth Special Interest Group, and they continue to oversee Bluetooth standards and licensing technologies.

Bluetooth Technology Still Has Some Caveats

You can only use a device connected to one computer at a time. If you go back to the first computer you were using, you’ll need to reconnect the Bluetooth device again, which can be done easily enough from the Settings app in Windows 10. Some devices such as Bluetooth headphones will have a button that says “Connect” if it detects you’ve started using the headphones on another computer, allowing you to skip the setup process where you need to hold in the button all over again, while Surface mice, on the other hand, will say that your device is still connected even though it needs reconnecting. These small drawbacks should one day be fixed, if not by better Bluetooth technology then at least with some updates to the Windows settings.

If you’ve got a Bluetooth device connected to the computer, such as a Surface mouse, then you can view how much of that device’s battery is remaining from the Settings application in Windows 10, starting from Windows 10 build 17639.

The following tutorial demonstrates how to check the battery level of a Bluetooth device when you’re suing a version of the Windows 10 operating system, starting from Windows 10 build 17639 and up.

How to Check Battery Level of Bluetooth Devices in Windows 10

You can see how much battery a Bluetooth device has left from the Settings application in Windows 10. Here is how you can do that:

2. From the main Windows Settings menu, click on Devices and then click on Bluetooth and other devices from the Devices menu.

3. In the right side of the Bluetooth & other devices window, look for the battery level icon under the Mouse, keyboard, & pen heading if you’ve got one of those devices. Otherwise keep scrolling down and look under the Other devices heading if you have a different device such as a Bluetooth headset. 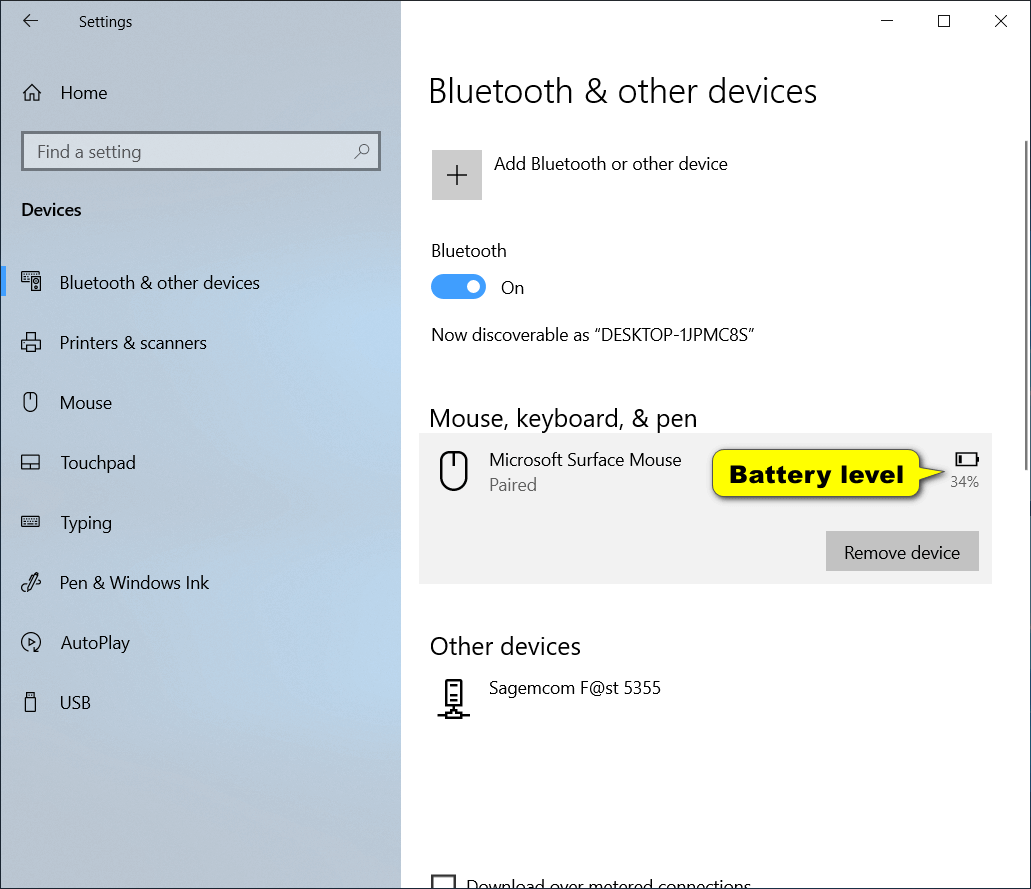 You can now close the Settings app.

Mat Diekhake is the editor of ConsumingTech.com. He has been inseparable from the internet since Web 2.0 in 2005, and by 2008 decided on a career in IT. With a never ebbing desire to cover technology, he spends most days consumed by Windows, Linux, and Android in particular. Though he has spent innumerable hours learning consumer software in general, formally and as an autodidact, and has personally authored over 10,000 articles since 2010. Microsoft awarded him numerous certificates resulting in him becoming a qualified Windows systems administrator (MSCA). Read Mathew's full biography. Mathew's social profiles: Twitter, Facebook, Instagram, LinkedIn, Github, Reddit.
« How to Verify if System Files and Drivers are Digitally Signed in Windows [Tutorial]» How to Enable/Disable TRIM Support for Solid State Drives in Windows 10 [Tutorial]