How to Change System Unattended Sleep Timeout in Windows 10 [Tutorial]

For some users, that means when they set up the desired sleep times for the computer, it is strangely still falling asleep on them outside of those desired times. It most cases like that, the System Unattended Sleep Timeout power setting—that was meant to be useful—is the culprit. You can adjust the time given to the Unattended Sleep Timeout and stop it from being such an inconvenience to your computing needs if you require it at any point in the future.

There are times when the System Unattended Sleep Timeout setting feature remaining in Windows 10 is justified. For instance, if you have created tasks using the Task Scheduler is one. The Task Scheduler in Windows 10 is designed to give users more power by allowing the execution of scripts and programs at times chosen by the user. The Unattended Sleep Timeout can help you set the timeout to be long enough for the task that you set with Task Scheduler to have sufficient time to complete what you had asked it to do.

There are some rumors around the internet that you’ll need to edit the registry to get System Unattended Sleep Timeout working, but in fact, the option to use it is available directly from the Advanced Power Plan Settings after downloading a file that tweaks the registry for you. There are also some commands you can run from the command line if you prefer, too.

Download the add System unattended timeout from Seven Forums and the file will then automatically end up downloading above the taskbar. The file won’t take long to finish downloading because it’s only a small file. Once it is completed, click on the little arrow that’s on the right side of the file like in the example below and then click on the “Show in folder” link from the menu.

It then shows you the file location. Click and drag the file from its folder location over to the desktop. Drop the file on the desktop.

Double-click on the file, and you’ll get a security warning from Windows letting you know that the publisher of the program could not be verified. That can sometimes be a warning sign if you are installing something from an untrustworthy source, but it’s fine for you to give permission for Windows to run the file this time by clicking on the “Run” button. 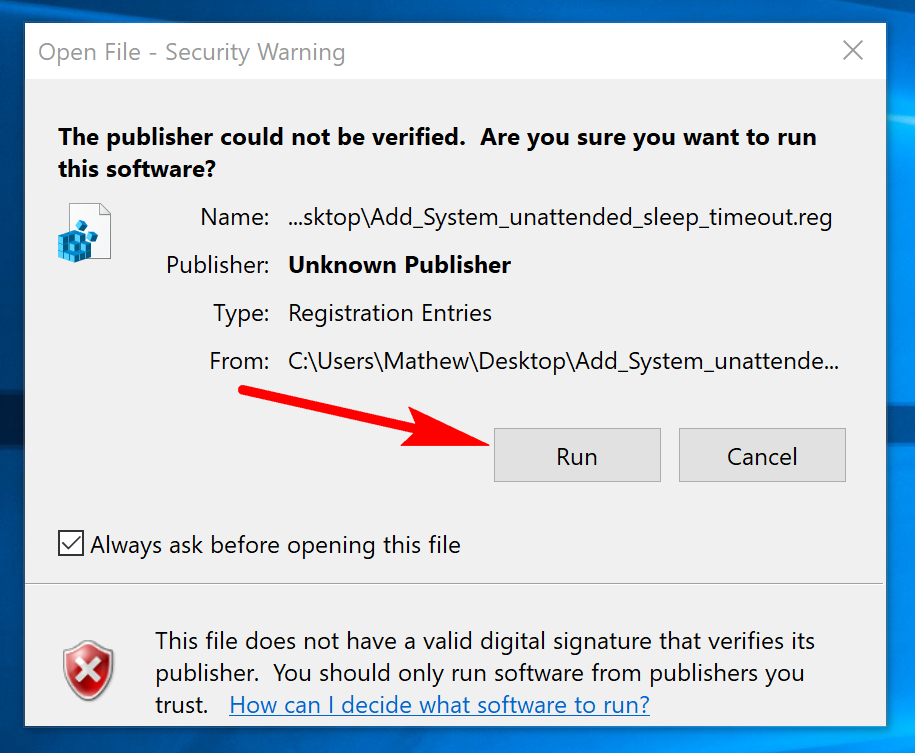 User Account Control will then give you a pop-up message on the computer’s display asking if you are sure you want to give this program permissions to make changes to the Registry Editor. It needs to do that for security reasons because if something were to be changing your registry that would be a problem if you didn’t authorize it, but since you trust this program, it’s fine this time and also what you need to do or else the program can’t make the necessary adjustment to your computer’s registry for the tweak to work.

You then get another message about how you shouldn’t play with the Registry Editor unless you know what you are doing. Click on the “Yes” button again since this file has been packaged together by some very talented geeks that you know you can trust.

You then get a message from Windows letting you know that the system unattended sleep timeout .reg file has been added to the registry of the computer. Click on the “OK” button to close the window and then you’re ready to start using the new setting. 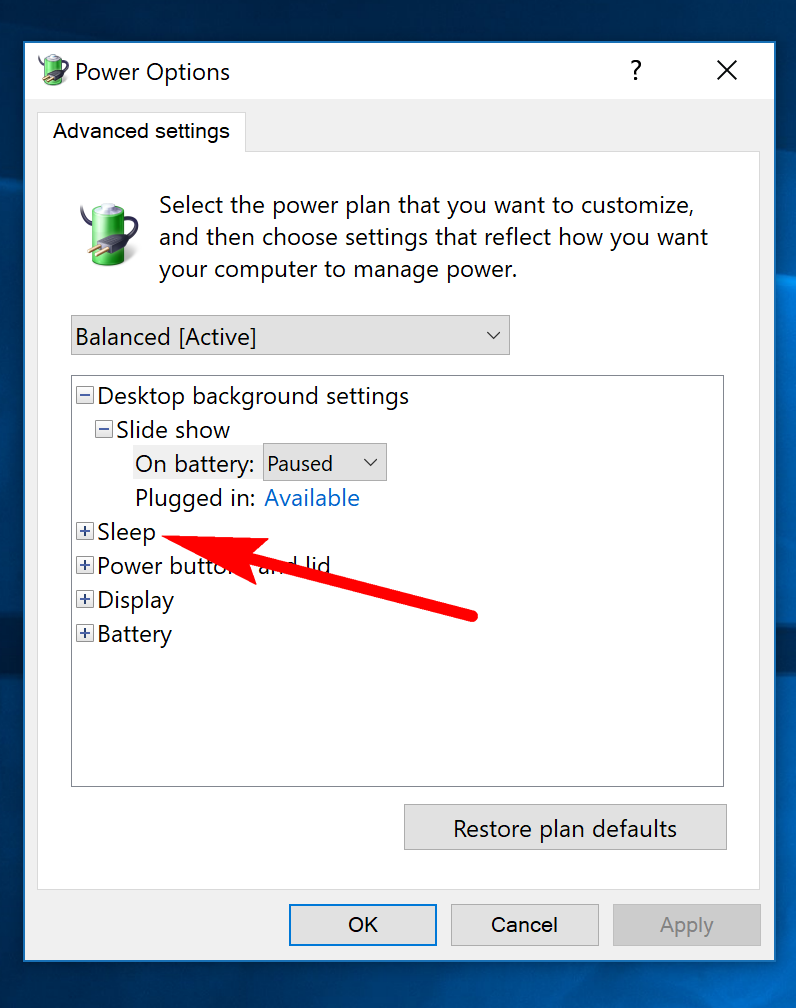 After you have expanded the “Sleep” entry, you’ll see a couple of options under there if your computer has the .reg file installed already that has tweaked the registry for you, so you don’t need to work out how to do it manually. The one that all computers will offer is the chance to change the “Sleep after” time, both for when it’s “On battery” and “Plugged in” to as power source. The other option you get is for “System unattended sleep timeout that you can alter as well. 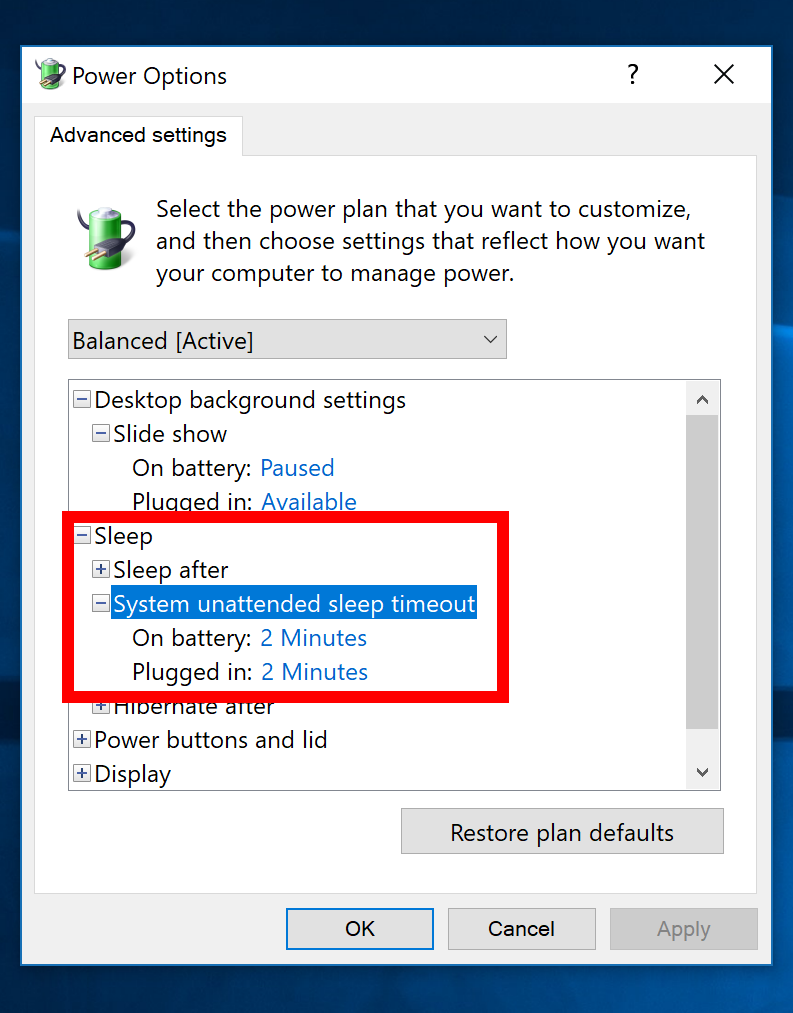 The system unattended sleep timeout feature was first introduced in Windows Vista. By Windows 7 it was no longer enabled by default, but the option was there to tweak it from the registry. That same option remains today in Windows 10, as well.

Mat Diekhake is the editor of ConsumingTech.com. He has been inseparable from the internet since Web 2.0 in 2005, and by 2008 decided on a career in IT. With a never-ebbing desire to cover technology, he spends most days consumed by Windows, Linux, and Android in particular. Though he has spent innumerable hours learning consumer software in general, formally and as an autodidact, and has personally authored over 10,000 articles since 2010. He is a qualified Microsoft Windows systems administrator (MSCA). Read Mathew's full biography. Mathew's social profiles: Twitter, Facebook, Instagram, LinkedIn, and Github.
« How to Allow/Prevent Devices to Wake Computer in Windows 10 [Tutorial]» How to Change Account Username in Windows 10 When Signed In to Microsoft Account or Local Account [Tutorial]