The Windows operating system relies on some key components such as the Kerberos authentication to be able to tell you the correct time from its clock that you will always find from the bottom right corner of the taskbar known as the system tray.

To display the time correctly Windows Vista relies on the BIOS. If you notice your time is inaccurate after turning off the computer, it could be because CMOS battery on your computer’s motherboard is no longer operating as it should and could need replacing. Thankfully, it’s only a lithium battery cell that needs replacing and not the whole motherboard. The lithium battery that is used is usually a lithium button cell, type CR2032. If, however, the computer’s clock is slowing down while the computer is still turned on, it’s likely to be a software issue rather than a hardware one. For example, it could be that a particular program is causing the clock to malfunction. One of the most common bits of software to cause programs is antivirus programs. Since you should never use the computer without antivirus running, you can test yours by installing another third-party offering and see if the slow clock persists using more than one antivirus.

If you are still unable to solve the slow clock, you can try changing the internet time synchronization as this can also be a culprit. Changing the time may allow you to synchronize without any errors occurring.

The following tutorial demonstrates how you can change the Internet Time Synchronization Update Interval to be updated more or less often when you are using a version of the Windows Vista operating system.

Note: We do not recommend changing the query interval to be fewer than four seconds. If you try updating it to less than four seconds, it is possible that you may get your computer’s IP address banned by the time server.

1. Open the Run dialog by clicking on Start and then typing regedit into the search bar and then clicking on the Registry Editor program when it appears at the top of the Start menu.

3. Using the left pane in the Registry Editor program, navigate through to the following path:

4. With NtpClient expanded, in the right pane of the same window right-click on SpecialPollInterval and click on Modify. (Click to enlarge the screenshot below.)

Note: You can also double-click on the SpecialPollInetrval DWORD if you prefer. 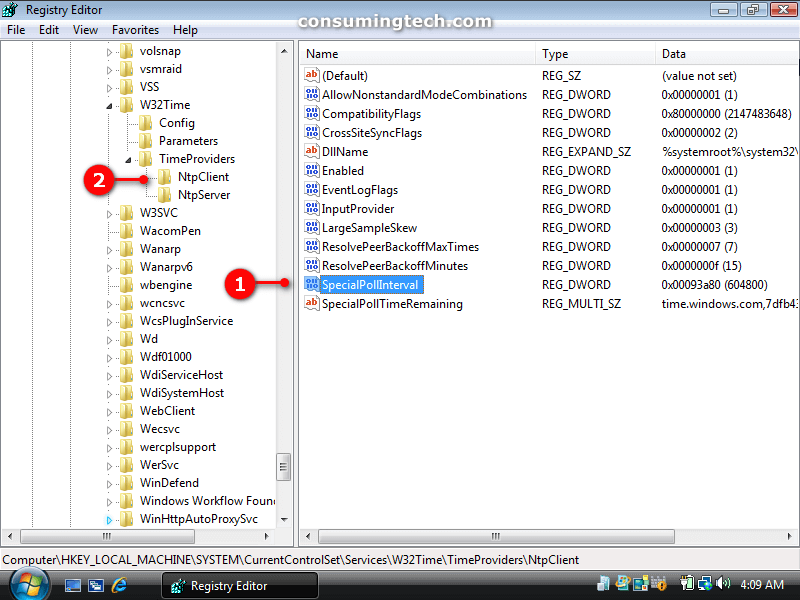 5. Under the Base heading from the DWORD, click on Decimal.

6. Using the numbers on your keyboard, type in the number of seconds you would like to change the internet time synchronization to. (Click to enlarge the screenshot below.)

Note: The default time used by Windows Vista is 604800. Remember not to choose under four seconds — there should be no need to go down anywhere near four seconds anyway.

7. Click on the OK button to save the changes and close the dialog.

8. You can now close the Registry Editor program and continue using your computer if you like.

in Windows Vista No Comments

Mathew Diekhake is a certified Microsoft Systems Administrator from Australia and also the founder and editor of ConsumingTech.com. With a never ebbing desire to cover technology, he is mostly consumed by Windows, Linux, and Android. However, he has spent stacks of hours learning about a variety of computer software, both formally and informally, and has authored tens of thousands of tutorials and news articles since 2011. Mathew has obtained many Microsoft certificates and is a qualified sysadmin (MSCA). Read Mathew's full biography. Mathew's social profiles: Twitter, Facebook, Instagram, LinkedIn, Github
« Police Scanner App 5-0 For Android» How to Root Micromax A50 Ninja on Android Gingerbread