The following tutorial demonstrates how to change between the desktop PC and Windows Mixed Reality input when using a version of the Windows 10 oeprating system.

Mixed reality is the result of blending the physical world with the digital world. Mixed reality is the next evolution in human, computer, and environment interaction and unlocks possibilities that before now were restricted to our imaginations. It is made possible by advancements in computer vision, graphical processing power, display technology, and input systems.

Technological advancement is what has enabled mixed reality experiences. There are no devices today that can run experiences across the entire spectrum; however, Windows 10 provides a common mixed reality platform for both device manufacturers and developers. Devices today can support a specific range within the mixed reality spectrum, and over time new devices should expand that range.

With the mixed reality headset, you can transition between the Windows PC desktop and the Windows Mixed Reality Portal automatically with the headset presence sensor or manually by using the Windows logo key + Y keys.

You can choose how the input devices switch between the desktop PC and mixed reality from the Settings app in Windows 10. Here is how you can do that:

2. From the main Settings menu, click on the Mixed Reality icon.

3. From the Mixed Reality menu, click on Headset display, and then scroll down the right side of the same window and under Input switching, select from the drop-down menu either Automatically switch using headset presence sensor or Manually switch using Windows logo key + Y. 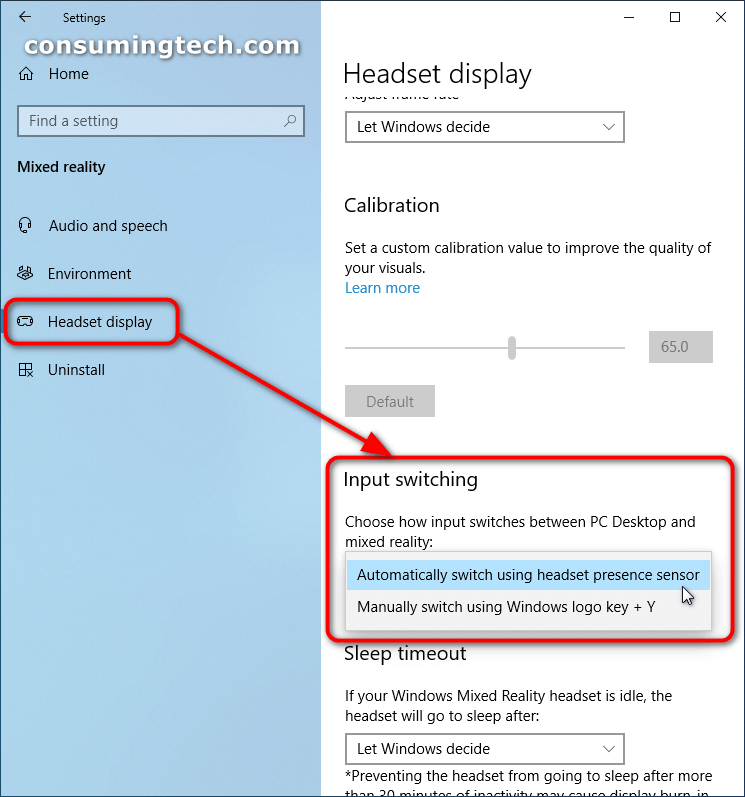 You can also choose how the input devices switch between the desktop PC and mixed reality from the Registry Editor in Windows 10. Here is how you can do that:

3. If it is not there already, right-click on the spare white space on the right side of the window and create a new 32-bit DWORD value and call it IgnoreHMDPresence. 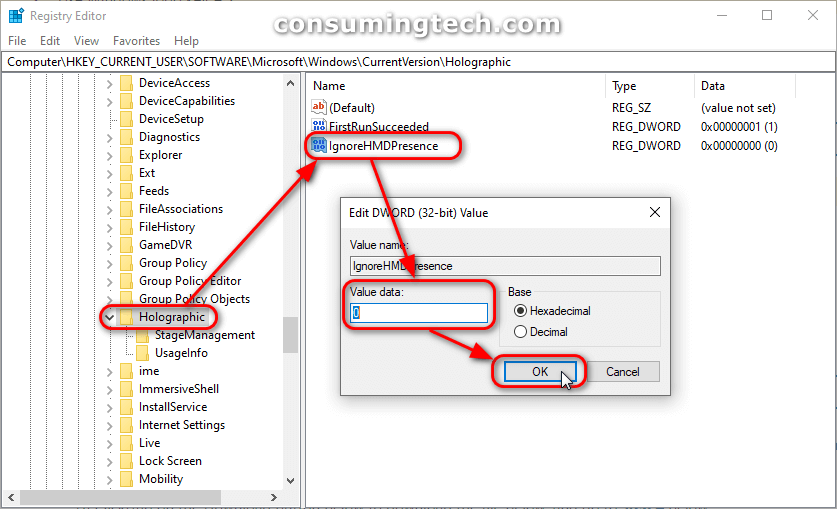 In conclusion, that is how to choose between having the input device automatically switch or manually switch for the mixed reality headset display.

Mathew is a qualified Microsoft Windows systems administrator (MCSA) who has covered OSs, browsers, the internet, and related tech since 2011. He is the founder and editor of ConsumingTech.com and is a freelance tech writer for various publications around the Web. Mathew graduated from Lumify Melbourne in 2011. He grew up in Melbourne and lives in rural Victoria, Australia. Read Mathew's full biography. Mathew's social profiles: Twitter, Facebook, Mastodon, Instagram, LinkedIn, and GitHub.
« Flush DNS Cache in Windows 10» Turn On/Off Windows Features in Windows 10