How to See Mixed Reality Headset Resolution in Windows 10 [Tutorial]

The following tutorial demonstrates how to see the resolution of a mixed reality headset when you use the Mixed Reality Portal app in a version of the Windows 10 operating system.

Mixed reality is the result of blending the physical world with the digital world. Mixed reality is the next evolution in human, computer, and environment interaction and unlocks possibilities that before now were restricted to our imaginations. It is made possible by advancements in computer vision, graphical processing power, display technology, and input systems.

Technological advancement is what has enabled mixed reality experiences. There are no devices today that can run experiences across the entire spectrum; however, Windows 10 provides a common mixed reality platform for both device manufacturers and developers. Devices today can support a specific range within the mixed reality spectrum, and over time new devices should expand that range.

How to See Mixed Reality Headset Resolution in Windows 10

You can see what the resolution for the mixed reality headset is from the Settings app in Windows 10. Here is how to do that:

Note: Since there is no way to adjust this setting, it is only displaying what the resolution of the headset actually is rather than giving you the option to change it from a drop-down menu of sorts.

2. From the main Settings menu, click on the Mixed Reality icon.

3. From the Mixed Reality menu, click on Headset display, and then scroll down the right side of the same window and look under the Resolution heading.

Note: You will need to connect the Mixed Reality headset to see its resolution. 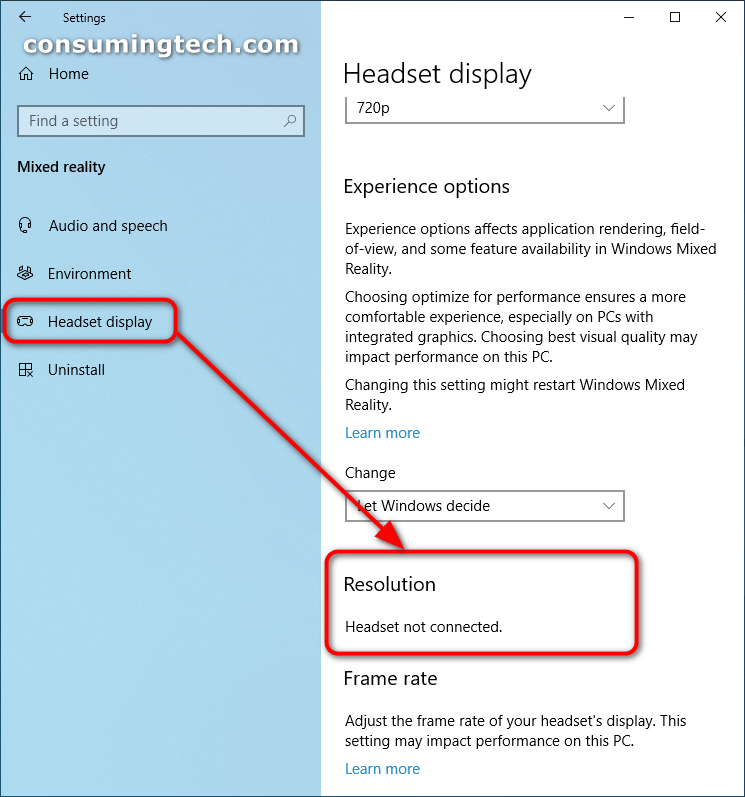 In conclusion, that is how to find out the screen resolution for the mixed reality headset, which is done from the Settings app rather than the Mixed Reality app itself.

Mat Diekhake is the editor of ConsumingTech.com. He has been inseparable from the internet since Web 2.0 in 2005, and by 2008 decided on a career in IT. With a never ebbing desire to cover technology, he spends most days consumed by Windows, Linux, and Android in particular. Though he has spent innumerable hours learning consumer software in general, formally and as an autodidact, and has personally authored over 10,000 articles since 2010. Microsoft awarded him numerous certificates resulting in him becoming a qualified Windows systems administrator (MSCA). Read Mathew's full biography. Mathew's social profiles: Twitter, Facebook, Instagram, LinkedIn, Github, Reddit.
« How to Backup and Restore with Macrium Reflect [Tutorial]» Windows 10 Search Not Working? Here’s What You Can Do to Solve It [Tutorial]