I’ve never been a huge fan of most of the designs that LG produce, but I’m happy to say that I do not dislike what LG has done here with the LG V20 smartphone at all. It doesn’t look like a regular LG phone. From the front when I first looked at it, I actually thought it was something made by HTC — and I like HTC.

The LG V20 isn’t just about looks either. It is military grade shock resistant against drops, and it has a quick acting fingerprint reader on the back which is ahead of its time and still a trend that we are seeing in other smartphones today like the Google Pixel and the Samsung Galaxy S8 handset. Apple handsets decided to put the fingerprint reader on the front where a “home” button would traditionally be, but Android have decided that they think it works better on the back — not far from the camera bump. And it seems like that is going to continue into the future, so good job LG for that. That same fingerprint sensor on the back of he V20 also doubles as the Power button and the sleep/wake button, so you get used to remembering that it is back there. 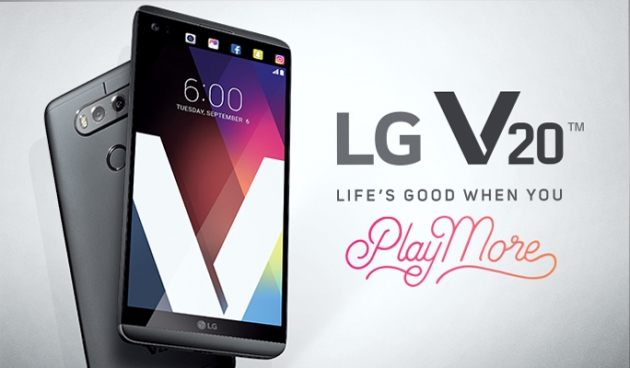 But one of my favorite features on this LG V20 phone is the removable battery that can easily be swapped over for a new battery when your first one starts running out of juice. A lot of companies don’t offer this for you to do yourself because they want you to upgrade the phone when the battery dies in a couple of years time. But now you can have your phone for as many years as you can keep finding batteries for it. I personally think that’s how all phones should be made and I hardly ever buy a phone that doesn’t come with a removable battery because I’m well educated with how these batteries work. Basically, it is just a ticking time bomb and will inevitably go down the more you use it. For example, I think Apple say you can charge your phone about 500 times before it will lose a certain amount of its screen on time. So every time you use one of these smartphones, the battery is getting weaker, and weaker, and weaker until eventually, it forces you to shop again.

As amazing as I think the LG V20 smartphone is, that version of Android that you are running on it is still the same old Android 7.0 Nougat that every other device out there that runs Android 7.0 also has. These software updates are pretty much universal, so the features you are given are also given to everyone else — apart from the features, you get along with having a phone from Lg and the particular smartphone carrier network that you signed up with. There is a way to change all of that, and it is by installing a custom ROM.

As long as you have either the V20 from T-Mobile or AT&T, you can install this MegaROM. The NTAF MegaROM is one of the most downloaded custom ROMs for the LG V20 smartphone. It comes with heaps of good features, like your chance to choose a custom kernel to go along with the ROM by selecting your choice of a kernel with the Aroma installer. The MegaROM also gives you the option between installing Chainfire’s SuperSU or the MagiskSU. Many people haven’t yet heard of the MagiskSU app, but it is a rooting tool that offers a systemless root version that works well for LineageOS. You can read more about the MagiskSU from the XDA-Developers news article that lets you know when Magisk turned into MagiskSU.

There is no official list of features for the MegaROM, but it also hints that you get Viper4Android installed by default when you install this custom ROM. You also get the popular 3Minit Battery feature that is used on many other custom ROMs.

The LineageOS 14.1 is based on the Android 7.1.1 Nougat software update and is generally available for all good smartphones that have some custom ROMs on offer. If there is one obvious difference with the LineageOS for the LG V20 smartphone, it would have to be that this time LineageOS is not currently the most popular custom ROM for the device that people are installing. That crown is currently awarded to the ROM we already covered above called the MegaROM. The main reason for that is probably because this is an unofficial build and not the official build, making it less popular to install on daily smartphones.

The downside with the Android 7.1.1 Nougat software is that it doesn’t come with many useful features The most recent Android 7.1.2 release only comes with one feature outside of Google Pixel and Google Nexus devices and the Android 7.1.1 comes with three features. With Android 7.1.1, you get new emojis, send GIFs from the default keyboard, and the chance to now launch actions available on applications by long-pressing on them with your finger.

Anyone interested in installing a ROM and kernel combination should look no further than the NRD90M Modded NotSoStock ROM. Judging by the name of the ROM, you can probably expect this one to not appear like a clean version of the Android Open Source project with a couple of minor tweaks, but I could be wrong.

Make sure you read the bold text that is available from the XDA-Developers thread download link in the original post where it talks about needing to the have the entire smartphone decrypted before you can install it. If you are finding that the TWRP Recovery is boot looping, then it is likely because of the encryption problem.

The Android Open Kang Project has been around for a very long time. It saw a drop in popularity over the years, but that doesn’t change the fact that it is featured in the Dirty Unicorns, PAC-Man, and many other custom ROMs because people value it.

AOKP ROMs are similar to AOSP (Android Open Source Project) ROMs, but they come with a small twist, thus making it different from AOSP. The AOSP is what the official versions of Android are before they then get distributed to the phone carrier networks or manufacturers where they both then put their unique spin on things, making it different from the Android that the AOSP developers had planned. You install something like the AOKP ROM if you want a close to stock version of Android with some small changes.

OBAR stands for One Bad Ass ROM (Even though I think that might be a typo and bad-ass should be one word. Still, just because a developer can’t spell very well and the basis of the ROM’s name is entirely false, doesn’t mean that the ROM itself isn’t very good — or does it?

I haven’t had the chance to load up this ROM just yet either, mainly because I don’t have an LG V20 smartphone in my house at the moment, but there is a lot to like about this ROM judging bg the features — even if the number of downloads this ROM has received isn’t all that convincing. Some of those features include it coming rooted with Chainfire’s SuperSU, BusyBox is already installed, it has had many of the stock applications removed already so you can expect better performance, Magisk and SuperSU are both compatible with this ROM — and I think those features alone should mean this ROM gets more attention that it does, but there is also still heaps of more features that you can read about from the download page.

The CMRemix custom ROM is based on the CyanogenMod 14.1 and LineageOS operating systems. It offers a bunch of the features which it thinks is best and then puts it under the CM “remix” name for your enjoyment. Just like with official CynanogenMod custom ROM, the CMRemix page is remaining mum on the features, so you’ll need to install it to find out just what it offers.

What we can tell you is that there are heaps of developers who have contributed to this custom ROM. It features work from the guys from CyanogenMod, AOKP, Paranoid Android, PAC-Man ROMs, SlimROMs, OmniROM, ChameleonOS, Carbon ROM and still loads more.

This list of what we think are the bets custom ROMs for the LG V20 smartphone will continually be updated when we see new ROMs that we believe deserve to be on the list become available.

Mat Diekhake is the editor of ConsumingTech.com. He has been inseparable from the internet since Web 2.0 in 2005, and by 2008 decided on a career in IT. With a never ebbing desire to cover technology, he spends most days consumed by Windows, Linux, and Android in particular. Though he has spent innumerable hours learning consumer software in general, formally and as an autodidact, and has personally authored over 10,000 articles since 2010. Microsoft awarded him numerous certificates resulting in him becoming a qualified Windows systems administrator (MSCA). Read Mathew's full biography. Mathew's social profiles: Twitter, Facebook, Instagram, LinkedIn, Github, Reddit.
« Add Google Photos Shortcut to Camera App in Android» Best Custom ROMs for Motorola Moto Z