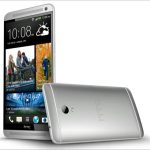 Evleaks has been doing a good job of coming up with some amazing leaks lately. Today via their Google+ account they posted a render leak of the HTC One Max.

The One Max was initially leaked around the web last week, however, we have never seen it in images like this before. Before today, it was just all talk and big talk at that.

With a report of a 5.9-inch screen, all but confirmed, things may be getting out of hand quite literally, soon in the mobile phone world. The new phone comes with the Sense 5.5 UI, Android 4.3 Jelly Bean, S-LCD 3 screen technology, 1080 x 1920 pixels resolution, 373 PPI pixel density and proximity, and light sensors. Furthermore, the rear-facing camera is 4 megapixels with LED flash and the front-facing camera is 2.1 megapixels. The hardware comes with a Qualcomm Snapdragon 600 APQ8064T system chip, Quad core, 1700 MHz, Krait 300 processor, Adreno 320 graphics processor, and 2048 MB RAM system memory.

Therefore, if you want a new smartphone that has a Big display, Extremely high pixel density screen, High-resolution display, Lots of RAM, Quad-core processor, Fast mobile data support, HDMI connector for TV-out, and NFC this is one handset you want to look out for.

Please note that this is the Max version which is always designed to be bigger than the standard HTC One.

There are no specs leaked as of yet. Rumors of there being two different models of the Max to come are about as in-depth as it gets on the spec front. From what we can see, it looks much like the standard One, only bigger.

Mathew is a qualified Microsoft Windows systems administrator (MCSA) who has covered OSs, browsers, the internet, and related tech since 2011. He is the founder and editor of ConsumingTech.com and is a freelance tech writer for various publications around the Web. Mathew graduated from DDLS Melbourne (now Lumify) in 2011. He grew up in Melbourne and lives in rural Victoria, Australia. Read Mathew's full biography. Mathew's social profiles: Twitter, Facebook, Mastodon, Instagram, LinkedIn, and GitHub.
« Official Moviefone App for Google TV Out Now» iTweak Store to Compete with Cydia