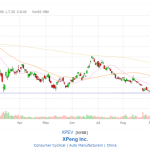 Xpeng closed on Friday at $8.49 after having fallen to as low as $6.42 at the beginning of November.

Many American stocks bounced this week due to inflation reports being positive. For the first time this year, we got some news that suggested inflation might be on its way down in America.

Though the inflation news was related to America’s economy, we did see stocks in the UK and China rise along with the US stocks. This was not easy to predict since it is widely believed that both the UK and China are in a depression or hurtling toward one.

Another reason many investors missed this bounce in Xpeng was due to Citigroup having downgraded the stock on October 28 to $3.18. That prediction always seemed irresponsible to me and I didn’t necessarily believe it. But when global investment banking company like Citigroup suggests Xpeng has another 50% to fall from its then lows, understandably many investors pulled their money out.

Now that Xpeng has bounced to $8.49 and there has been no update to this stock since Citigroup’s $3.12 downgrade call, be wary of buying in at this price. However, on the positive side, since October 22, Xpeng has had more green days than red days, suggesting that it may have found a short-term bottom. Those with medium to long-term time horizons need to be careful of Xpeng falling back down if the bear market is not over and the index funds fall to new lows.

Mat Diekhake is the editor of ConsumingTech.com. He has been inseparable from the internet since Web 2.0 in 2005, and by 2008 decided on a career in IT. With a never-ebbing desire to cover technology, he spends most days consumed by Windows, Linux, and Android in particular. Though he has spent innumerable hours learning consumer software in general, formally and as an autodidact, and has personally authored over 10,000 articles since 2010. He is a qualified Microsoft Windows systems administrator (MSCA). Read Mathew's full biography. Mathew's social profiles: Twitter, Facebook, Instagram, LinkedIn, and Github.
« Google Insider Transactions up 20.99% – Nov 1, 2022» Google Bounces to $96.73; P/E Back to 19 – Nov 13, 2022