I want to install Windows 10 on a computer that doesn’t have it already available from the manufacturer’s disk or from a free Windows 10 upgrade that I missed out on. And I want to do it the legal and official way that Microsoft wants people to use.

Much like your mobile operating systems, Microsoft is releasing one major update, equipped with loads of new features, every year now. In addition, you’ll still find many smaller incremental updates throughout any given year as well. It isn’t the be-all and end-all if you happen to install an earlier version of Windows 10, because Windows Update will assist you in getting up to speed naturally anyway, without you needing to do anything at all—not even accept the software updates as notifications, as Windows currently prefers to force them upon you, when you go to shut down the PC and boot it back up again so you never miss out.

As of right now, the newest release of Windows 10 that anyone can install is the Windows 10 April 2018 Update (version 1803). While April sounds like long ago now, the update actually arrived toward the end of April. And we’re a considerable amount of time away still from the next update that’s yet to come, as Microsoft has already made it clear that they intend to release it sometime during October later this year.

Some of you might be interested in learning that you can always check what version of Windows 10 your computer is running right now by simply typing “Winver.exe” into the Cortana search box, located in the taskbar at the bottom of your display. At the top of the search window will be the Winver.exe Run Command—click on it and then you’ll get a little window opening that gives you the details, similar to the screenshot below. 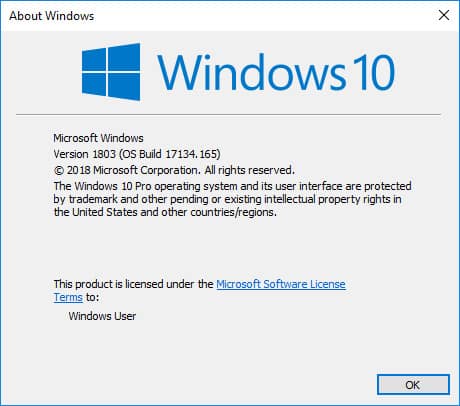 What Is an ISO File?

An ISO file is often used to distribute large files so you can install them on your computers. The ISO file is convenient because it contains everything you need all packed into one file.

As far as Windows goes, you can use the ISO file to burn Windows to a disk or to put it on a USB flash drive so you can install the operating system via a USB stick.

If you do not have a disk or USB flash drive, you could also mount the ISO file. This means you would be tricking Windows into thinking you have a disk or flash storage drive without having to purchase one. You can usually mount ISOs with disk emulators. Mounting Windows 10 is not very common, but mounting ISOs, in general, is often carried out by gamers who want to continue playing a game without removing the original disk from the disk drive.

Everything you’re about to do here is above board—there’s nothing illegal about downloading the ISO files from the Internet and installing them on your computer, even though at first it may seem a bit cheeky. In fact, it is Microsoft who is offering up these ISOs, thanks to their installation media that makes installing them a cinch.

The reason this is all legal is that even though you have the ISOs here, you still need to use a product key to get the full version or pay to upgrade after you’ve been using the ISO version. During the installation, you’ll get to a point where one of the screens does ask for you to enter a product key—use it if you have one, but you can continue with the installation to get Windows 10 running on your PC for now even if you don’t. Those of you who enter the product key will have an activated version of Windows 10 running right from the get-go, while those of you who opt for skipping that information, for now, will need to activate it, one way or another, later on down the track.

This is what you need to download and install the latest version of the Windows 10 ISO file from Microsoft. You will, of course, need to have a DVD to burn the ISO file to later. If you don’t want that, then you should opt to install Windows 10 from a USB flash drive instead—both options will be available to use from this same tool. For a full list of requirements, you can visit this Microsoft support page for creating installation media for Windows.

How to Download Windows 10 Latest Version ISO from Microsoft

Start off by downloading the Media Creation tool from the official Microsoft source, which will then download the latest version of the Windows 10 ISO file. From that same resource, you can choose between either the 64-bit or 32-bit architecture, though most computers nowadays are overwhelmingly equipped with 64-bit processors.

Conventional web browsers, such as Google Chrome, can give a warning when you try to download the file. This is a perfect example of how browsers can sometimes get things wrong. Since it’s coming from Microsoft (as can be seen by the URL of the webpage), you know it’s safe, so ignore the warning and choose the option for keeping the file. It’ll then show up as available for you to download and use.

The first screen you’ll see when you do is the Applicable notices and license terms, as shown below. Click on the “Accept” button to continue. 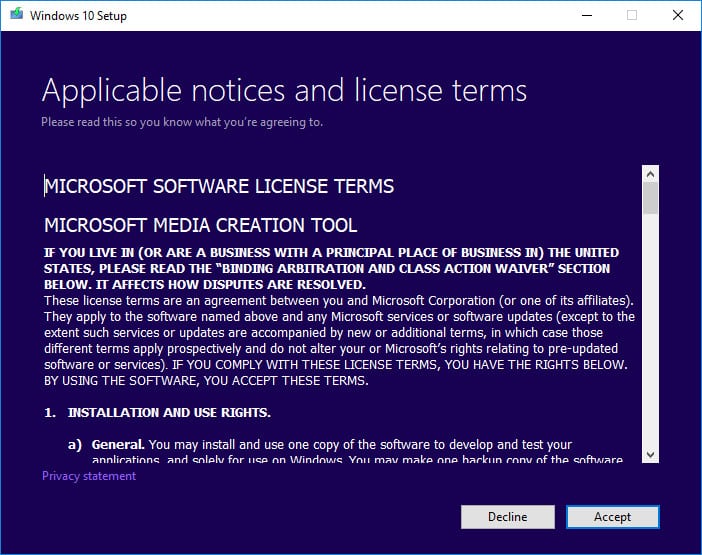 When it asks what you want to do, change it over to the “Create installation media (USB flash drive, DVD, or ISO file) for another PC.” Click on the “Next” button to continue. 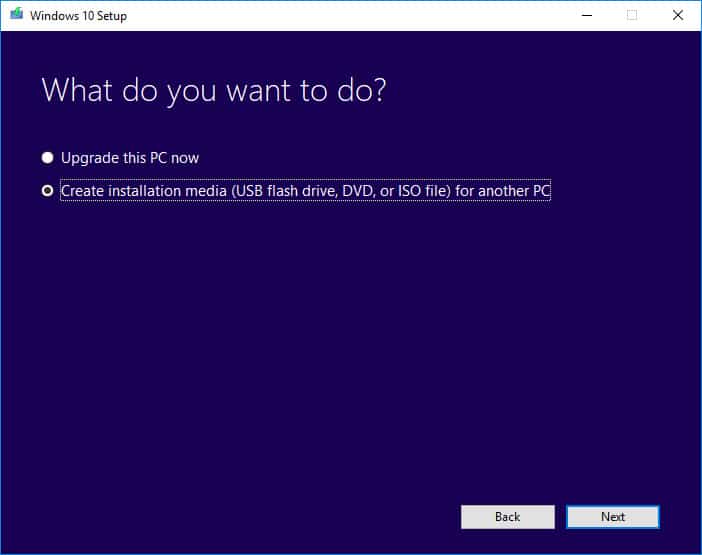 Next, select your preferred language, edition of Windows and the computer’s architecture aka the type of processor that it uses (all modern-day computers will be 64-bit). 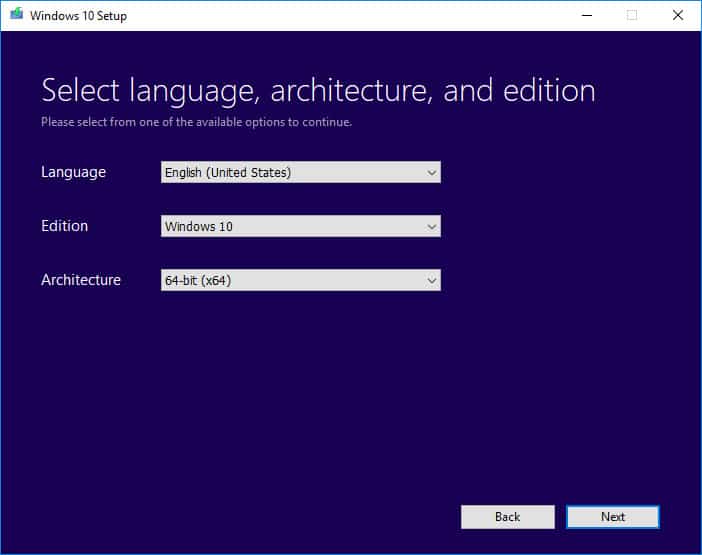 Select “ISO file” when it asks what type of media you wish to use. 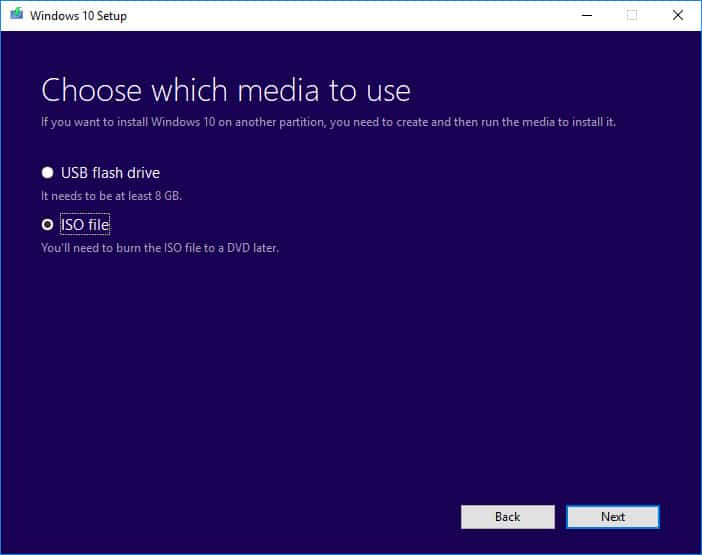 The ISO file now begins to download to your computer once you’ve chosen where you want to download the file (if unsure just choose the desktop for easy access to it later). 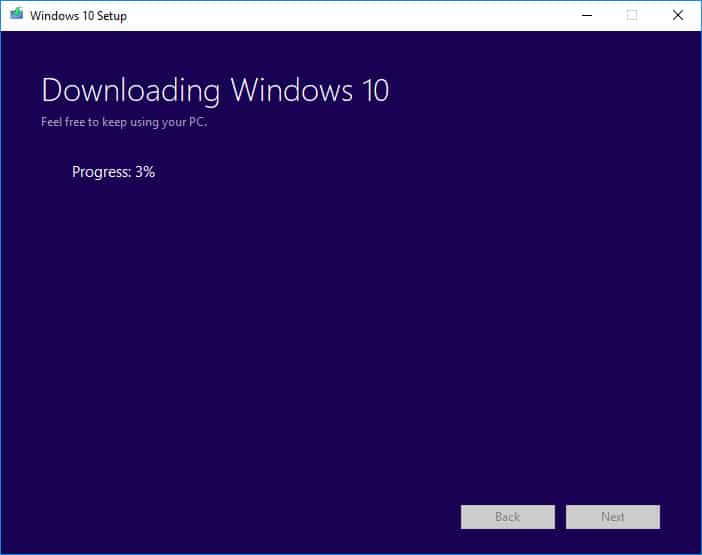 The Windows 10 ISO file is quite large, so downloading will take some time. It then also goes through the process of creating the Windows 10 media, which takes more time yet again. But soon you’ll have the ISO image ready. When it is you’ll be given one last option, which is to burn the ISO file to a DVD if you want. If you don’t want to do that, and you prefer having a bootable USB, then just click on the “Finish” button to close the installation wizard.

Mathew is a qualified Microsoft Windows systems administrator (MCSA) who has covered OSs, browsers, the internet, and related tech since 2011. He is the founder and editor of ConsumingTech.com and is a freelance tech writer for various publications around the Web. Mathew graduated from DDLS Melbourne (now Lumify). He grew up in Melbourne and lives in rural Victoria, Australia. Read Mathew's full biography. Mathew's social profiles: Twitter, Facebook, Mastodon, Instagram, LinkedIn, and Github.
« Automatically Login in Windows 10» Download: TeamViewer 13 Free For Windows 10