Windows 10 users who are signed up to receive the Insider builds that are set to be delivered on the fastest setting will see a new feature available for them to skip ahead to the following Windows release instead. Skipping ahead means you can start receiving Windows updates that are beyond the Fall Creators Update updates that are set to arrive shortly as the Windows developers have now set their sights beyond the Falls Creators Update.

The option to skip head will give you updates still regarded as the Falls Creators Update, but they will be builds that have been worked on less. For that reason the newer updates you can skip ahead to will be more susceptible to bugs, and that’s the one downside to think about before accepting them.

The option for skipping ahead is there because Microsoft is pretty happy with the first stages of the Fall Creators Update and now have their sights set on the builds that are set to arrive later on. To achieve that they need more people trying out the future builds instead.

The ability to skip ahead is only going to be a temporary one, designed purely to try to make the Falls Creators Update as safe as possible for its release to the general public. Once the updates have rolled out to the public, the option of skipping ahead will go away, and it’ll be back to everyone receiving the same updates again as Microsoft sets their sights on what else is coming in the future that extends beyond the Falls Creators Update.

Starting today, Windows Insiders in the Fast ring will see a new drop-down in their flight settings via Settings > Update & security > Windows Insider Program to skip ahead to the next release of Windows 10. 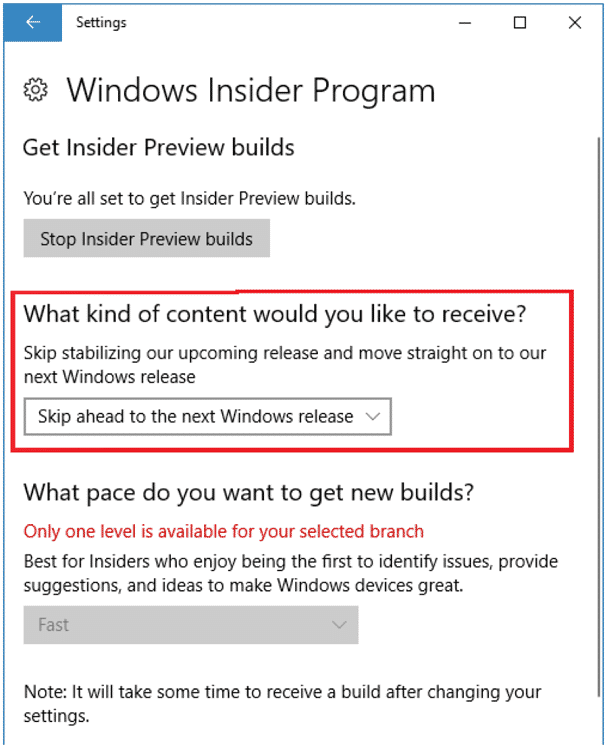 We are now at the stage in the development cycle for the Windows 10 Fall Creators Update where we’re working hard to bash all the bugs and stabilize so it’s the best Windows 10 release yet for all our customers. As we work to prepare the Windows 10 Fall Creators Update for the world, our engineering teams are beginning work on the next release of Windows 10 from our Development Branch. Windows Insiders in the Fast ring who choose to skip ahead will be given the opportunity to start trying out these builds in addition to receiving app updates again for many of the inbox apps in Windows 10 such as Photos, Skype, Groove, and Movies & TV.

Before choosing to skip ahead – there are a few things to keep in mind: builds from RS_PRERELEASE will get less stable as teams start checking in new code. So just like Insider Preview builds usually are after a Windows 10 release, things will likely be a little rough. If this concerns you or makes you uncomfortable – don’t choose to skip ahead and simply wait for the Fast ring to transition back to RS_PRERELEASE down the road. We also need to have Windows Insiders in the Fast ring helping us get the Windows 10 Fall Creators Update ready and giving us feedback on issues they are experiencing. So there will be a limit as to how many Windows Insiders can skip ahead. Once that limit is met, the UI on the flight settings page will notify Windows Insiders trying to choose to skip ahead that it’s been closed.

We are excited to experiment with putting early builds of the next release of Windows 10 in the hands of some Windows Insiders as we stabilize and prepare a release to go out to customers.

Mat Diekhake is the editor of ConsumingTech.com. He has been inseparable from the internet since Web 2.0 in 2005, and by 2008 decided on a career in IT. With a never ebbing desire to cover technology, he spends most days consumed by Windows, Linux, and Android in particular. Though he has spent innumerable hours learning consumer software in general, formally and as an autodidact, and has personally authored over 10,000 articles since 2010. He is a qualified Microsoft Windows systems administrator (MSCA). Read Mathew's full biography. Mathew's social profiles: Twitter, Facebook, Instagram, LinkedIn, and Github.
« Making Web Smoother with Independent Rendering in Microsoft Edge» Microsoft Releases Official Statement Following Consumer Report Dropping Surface Devices From Its Website