How to Uninstall OneDrive in Windows 10

Microsoft acquired OneDrive so it could have a cloud storage service natively integrated into its Windows operating system. That said, there are times when people prefer disabling it. If you know you are not going to use OneDrive, you may as well uninstall it and free up some more memory so your computer’s hardware does not have to work as hard. Only those with flagship computers do not have to worry about such a thing today.

The following tutorial demonstrates how to uninstall OneDrive when using a version of the Windows 10 operating system.

How to Uninstall OneDrive in Windows 10

You can uninstall OneDrive from your computer from the Apps section of the Settings app. Doing so will completely remove OneDrive from the computer and free up the memory resources for the hardware it was using when it was installed. Here is how to do that:

Note: Once you uninstall OneDrive, you need to download it again from the Microsoft Store if you were ever wish to reinstall it. 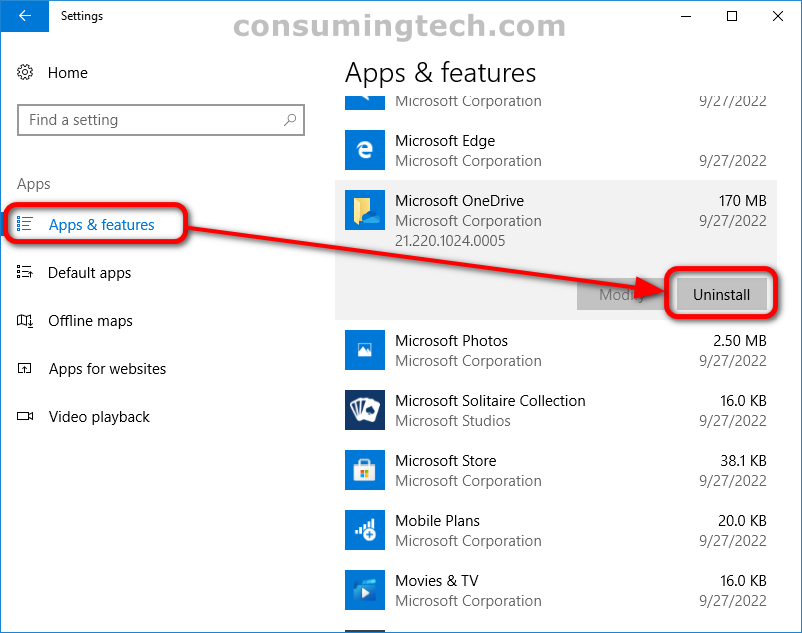 In conclusion, that is how to uninstall OneDrive in Windows 10.

Mat Diekhake is the editor of ConsumingTech.com. He has been inseparable from the internet since Web 2.0 in 2005, and by 2008 decided on a career in IT. With a never-ebbing desire to cover technology, he spends most days consumed by Windows, Linux, and Android in particular. Though he has spent innumerable hours learning consumer software in general, formally and as an autodidact, and has personally authored over 10,000 articles since 2010. He is a qualified Microsoft Windows systems administrator (MSCA). Read Mathew's full biography. Mathew's social profiles: Twitter, Facebook, Mastodon, Instagram, LinkedIn, and Github.
« How to Turn On/Off OneDrive Cloud-Only Content in Windows 10 Photos App» How to Turn On/Off Run OneDrive at Startup in Windows 10