OneDrive now allows for online files, meaning the files don’t have to be downloaded to your computer for you to view them. This feature is called OneDrive Files On-Demand. There is also an offline files option when using OneDrive Files On-Demand. When set to offline, you can still view the same files, but they will be downloaded to your computer, meaning they will need to take up storage space on the disk. You can choose between allowing only online files, only allowing offline files, or allowing a combination of the two.

If you do choose to allow cloud-only content, you can also customize which folders the Photos app will check for files in; you don’t have to allow access to all folders. We walk you through how to choose individual folders in the guide below.

The following tutorial demonstrates how to turn on/off OneDrive Cloud-Only Content in the Photos app when using a version of the Windows 10 operating system.

You can allow cloud-only content and choose which folders you would like to grant the feature access to from the Photos app settings. Here is where you can find it:

2. Click on the three-dotted See More icon in the top right corner of the Photos app window. And then click on Settings.

3. Under the Microsoft OneDrive heading, toggle on or off Show my cloud-only content for OneDrive. 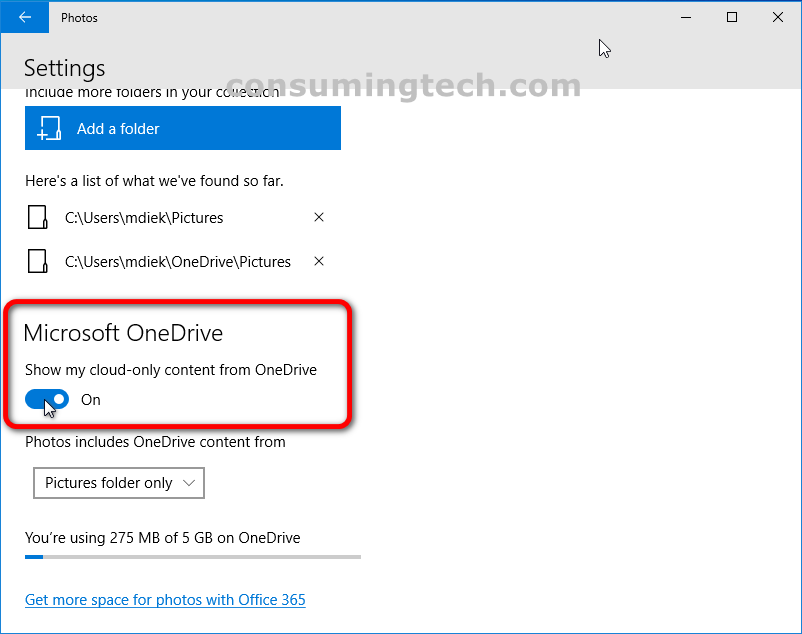 4. Beneath the toggle is the option to choose exactly which folders to include in the cloud content.

In conclusion, that is how to turn on/off OneDrive Cloud-Only Content in the Windows 10 Photos app.

Mat Diekhake is the editor of ConsumingTech.com. He has been inseparable from the internet since Web 2.0 in 2005, and by 2008 decided on a career in IT. With a never-ebbing desire to cover technology, he spends most days consumed by Windows, Linux, and Android in particular. Though he has spent innumerable hours learning consumer software in general, formally and as an autodidact, and has personally authored over 10,000 articles since 2010. He is a qualified Microsoft Windows systems administrator (MSCA). Read Mathew's full biography. Mathew's social profiles: Twitter, Facebook, Mastodon, Instagram, LinkedIn, and Github.
« How to Automatically Make OneDrive Files On-Demand Online-only in Windows 10» How to Uninstall OneDrive in Windows 10