Grammar software advancements have come a long way over the years. Now not only are there tools out there to correct spelling, but punctuation and sentence structure are being included to as the software learns from the millions, billions, or perhaps even trillions, of sentences people enter into these programs. That doesn’t spell good news for guys like me who have spent many years trying to learn the English language. On the other hand, it is a significant advantage to people who haven’t put in as many hours trying to learn how to write English as I have and they want to write something of substance for school or even perhaps work duties.

If you had spent the last decade or so learning how to write on your own, then it would be understood if you were feeling a bit down, or even perhaps had lost some passion for writing, given the recent software advancements. But before getting too depressed, you should realize that a similar thing was probably going to be happening in most industries over the next 50 years. So many jobs might be lost that it becomes hard to think what will and won’t be around in the future, and if the world doesn’t fail under right-wing corporate capitalist domination, capitalism inevitably will fail when there are nowhere near enough jobs to go around. Many things are vulnerable to be taken over by robots and software. But for the sake of content creating heading forward, the inclusion of personality and human thought in one’s work is probably going to define it more so than the ability to write as the software’s ability grows ever stronger. If we can keep robots away from being able to do that, then we can probably continue creating content more desirable to other humans than robots ever could.

The fact that not everyone enjoys having tools like spell check turned on is also something that works in a writers favor. For some, spell check becomes more of a burden than a positive due to the nature of the English language being complicated, and there were many variations of words for different circumstances. For example, many brands out there today are words that are misspelled according to the English language, but that doesn’t mean they necessarily need correcting. There are many instances of these types of situations in existence, and there is still no real substitute for the human eye and brain to do the best job. It will likely stay that way—at least for a little while.

This is how you can turn the spell checking feature on or off when you’re using one of the versions of the Windows 10 operating system.

How to Turn On/Off Spell Checking via Settings App

Click on the “Start” button from the left side of the taskbar.

By default, it opens up to the printers and scanners page—you can see that where it shows the “Printers & scanners” highlighted in blue. Click on the “Typing” link from the left pane to open up everything to do with the typing features. 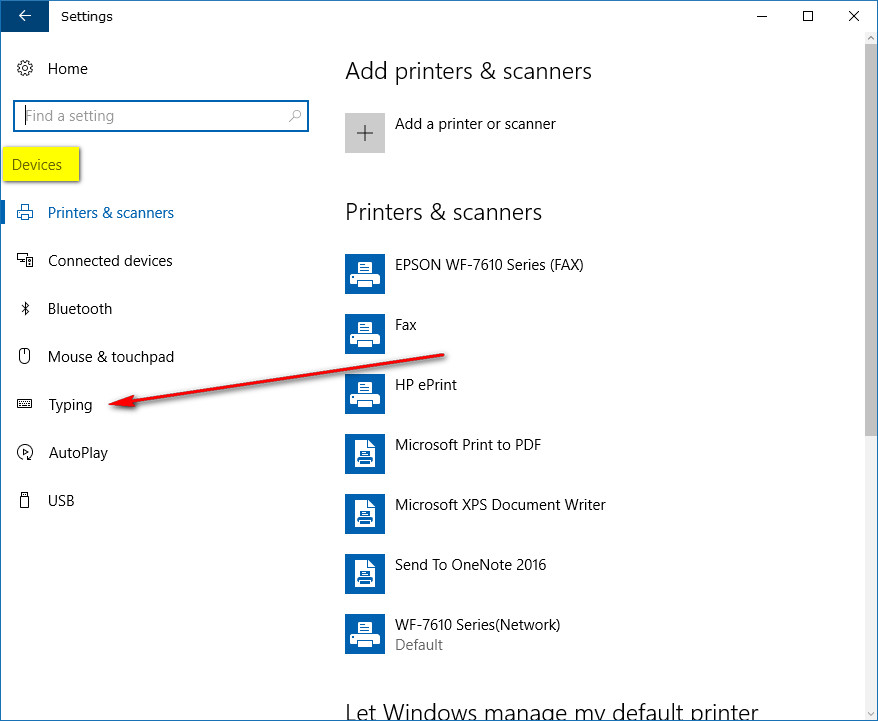 Now just look at the top of the right side pane for the two toggles that are related to the spelling. The top option lets you toggle the option on or off for autocorrecting misspelled words, and the bottom toggle takes care of the highlighting of misspelled words. By way of explanation, if you don’t want Windows to correct words for you, you might still be interested in having them highlighted so you can then made the decision between altering term or not—handy of you are typing lots of words that you think spell check might have a lot of issues worth (think brands with technically inaccurate spellings etc.) 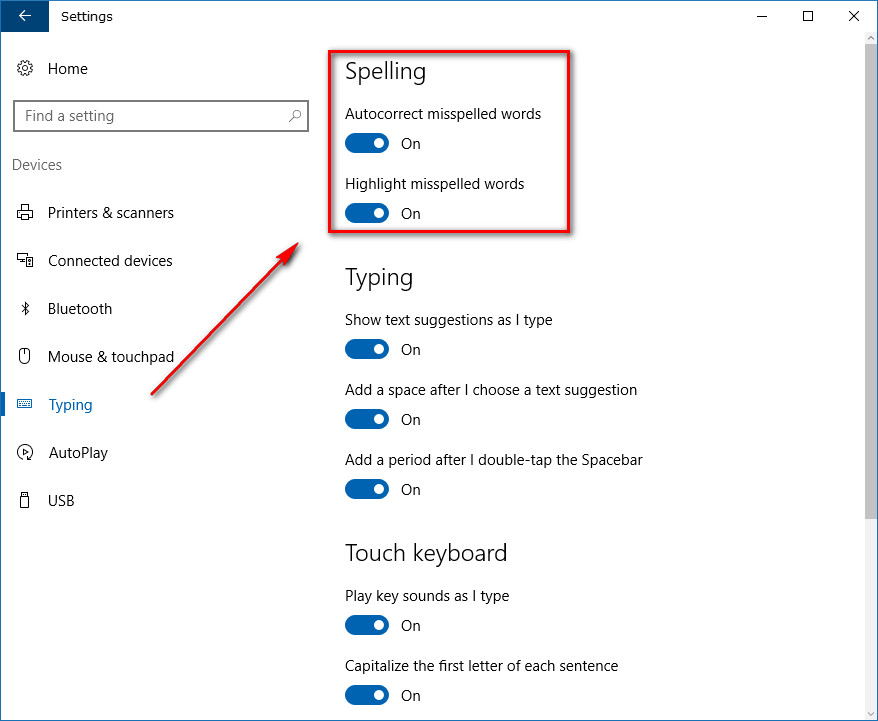 Spell checking is not going to turn your typing into Hemingway-esque stuff because there is considerably more to the English language than just spelling. But having software to help with your spelling can help even those who spell well. The human eye naturally misses some things that software does a great job of being able to pick up, and giving your work a once over with spell checking software is always the best idea, no matter how good you think it is. On the other hand, you shouldn’t fall into the trap of relying on software either. Sometimes the software just doesn’t pick up things, and it leads to bad habits of not even checking. Ultimately what’s best is using a combination of software and your human eyes to create the best work.

Mathew is a qualified Microsoft Windows systems administrator (MCSA) who has covered OSs, browsers, the internet, and related tech since 2011. He is the founder and editor of ConsumingTech.com and is a freelance tech writer for various publications around the Web. Mathew graduated from DDLS Melbourne (now Lumify). He grew up in Melbourne and lives in rural Victoria, Australia. Read Mathew's full biography. Mathew's social profiles: Twitter, Facebook, Mastodon, Instagram, LinkedIn, and Github.
« Install WhatsApp Desktop App on Windows 10» Open Control Panel in Windows