If OneDrive isn’t yet a household name, it will be soon. The Fall Creators Update brought about with it many features, as the annual software updates will continue to do, one of which was the OneDrive Files On-Demand.

OneDrive integration with the Windows operating system wasn’t very good in Windows 8—it wasn’t until Windows 8.1 in fact that it was integrated everywhere—but things improved dramatically in Windows 10 when it was first released, and now Microsoft has made it even better again with Files On-Demand, allowing you to access all your files directly from the cloud without having to download them to the hard drive, which would usually require you to take up your storage space.

The whole point of cloud storage is to assist you in keeping stuff off your hard drive: for security reasons, so you can buy devices with less space, and so you can continue using devices without needing to be tech savvy and try to work out why you’re always running out of space and how you would go about solving it. With that in mind, it’s hard to argue that Files On-Demand is anything but a step in the right direction since it is allowing you to free up even more space than you were able to have before.

The Difference Between Old OneDrive and OneDrive Files On-Demand

Up until now, you could only use OneDrive cloud storage to host your files. When you wanted to view them outside of OneDrive, you would have no choice but to physically shift it from its location in OneDrive to your hard drive and then you could view them on your computer. With OneDrive Files On-Demand, however, you can now view the files on your computer without actually physically hosting them on your hard drive, so they’re always up in the cloud, and you still keep your storage space locally.

It might not seem like a huge deal to some, but over the last few years it’s become apparent that it isn’t possible to get great hardware on the cheap, so you’ll need to sacrifice storage space if you don’t want to be paying top dollar while you play with the latest technology—there are loads of small form factor devices out there today that people are using a lot of the time, such as mobile phones.

Now when you open up File Explorer and open up a folder to view your files, you’ll see a new column at the top of the window called “Status” with the contents of that column showing three new details, all of which are directly related to this OneDrive Files On-Demand feature. The blue cloud is there to show you files that are “online only,” meaning files that aren’t taking up any space on your hard drive. When you choose to open the online file, the blue cloud then changes to a green tick. This will now take up space on the hard drive, given that it has now changed to a locally available file, but when you’re done with it, you can right-click on it and then change it back to an online file by selecting the “Free up space” option from the menu. Files with a green circle next to them in the Status column are called files that you “always keep on this device” and they’ll always take up hard drive space but can be viewed even when your computer doesn’t have an internet connection.

An example of how OneDrive files on-demand looks from File Explorer:

The following tutorial demonstrates how to turn on or off the OneDrive files on-demand feature that now comes with Windows 10.

Note: OneDrive On-Demand doesn’t just start working for your operating system automatically after you update your software. Instead, you’ll need to turn it on manually. That way some people—in particular, those who don’t have any interest in learning new features—can continue using the operating system without it.

1. If you’ve already removed the OneDrive icon from the taskbar, you’ll need to get it back again and then right-click on it when you see it.

2. Now click on the “Settings” link from the menu.

3. Make sure you’ve selected the “Settings” tab at the top of the Microsoft OneDrive dialog box window and then click in the checkbox for the “Files On-Demand” so it has a checkmark in it and then click on the “OK” button at the bottom of the dialog to apply the changes. 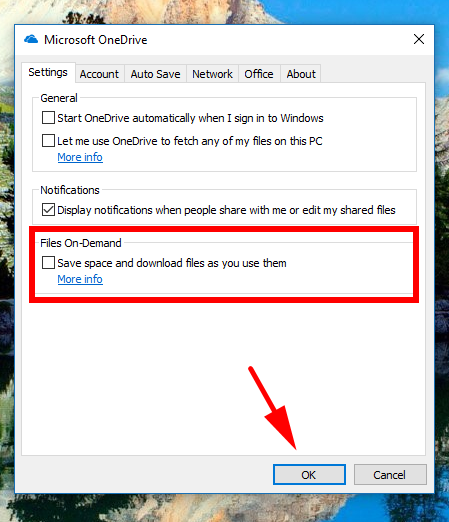 Like with any new feature, it’ll take some time to get used to, especially for those who don’t care too much about computers and have little interest in learning what’s new and just want to get angry that things have changed. But when you see OneDrive Files On-Demand, you’ll see that it’s easier to grasp visually than in words, and it doesn’t take a lot of effort to understand what’s happening so long as you read the parts that explain what the three icons mean.

Mat Diekhake is the editor of ConsumingTech.com. He has been inseparable from the internet since Web 2.0 in 2005, and by 2008 decided on a career in IT. With a never ebbing desire to cover technology, he spends most days consumed by Windows, Linux, and Android in particular. Though he has spent innumerable hours learning consumer software in general, formally and as an autodidact, and has personally authored over 10,000 articles since 2010. Microsoft awarded him numerous certificates resulting in him becoming a qualified Windows systems administrator (MSCA). Read Mathew's full biography. Mathew's social profiles: Twitter, Facebook, Instagram, LinkedIn, Github, Reddit.
« How to Fix: Ctrl Key + Mouse Click Not Selecting Multiple Items in Windows 10 [Tutorial]» How to Enable/Disable Win32 Long Paths in Windows 10 [Tutorial]