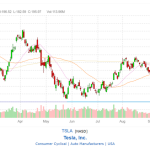 Some big tech stocks are more appealing than others to buy on any given week. Right now it is Tesla that looks the most appealing out of large-cap tech.

Google saw a big green candle stick from $87.02 to $97.26 this week, but Tesla didn’t experience a green dance stick at all. One of the reasons Tesla was lagging was because of Twitter’s problems in sorting out how it plans to become profitable with its new blue checkmark subscription service.

There is no reason for the Twitter stock to affect Tesla’s stock price, but since Elon is the boss of Twitter, so far we have seen Tesla stock get hurt when Twitter is having a difficult time.

Mat Diekhake is the editor of ConsumingTech.com. He has been inseparable from the internet since Web 2.0 in 2005, and by 2008 decided on a career in IT. With a never-ebbing desire to cover technology, he spends most days consumed by Windows, Linux, and Android in particular. Though he has spent innumerable hours learning consumer software in general, formally and as an autodidact, and has personally authored over 10,000 articles since 2010. He is a qualified Microsoft Windows systems administrator (MSCA). Read Mathew's full biography. Mathew's social profiles: Twitter, Facebook, Instagram, LinkedIn, and Github.
« Meta Sees Strong Demand after 7 Year Low – Nov 13, 2022» Motley Fool Calls Alphabet Once in Decade Buying Opportunity