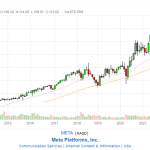 Meta bounced with the rest of the market this week after having fallen to its lowest price in seven years last week.

Meta fell to $87.50 last week, its lowest price since 2015. That was a lot lower than the charts were suggesting it would fall.

Meta has since risen to close the week at $114.91 which is where we were expecting its low to be.

On the weekly chart, Meta has seen strong buying this week only comparable to the selling in February and the selling in early November, suggesting that there was plenty of demand when it was under $100. Perhaps Meta stock has already bottomed for this bear market, but given how much selling there has been over the past 9 months, one can’t be too sure it won’t fall again if the bear market were to continue in the index funds.

Mat Diekhake is the editor of ConsumingTech.com. He has been inseparable from the internet since Web 2.0 in 2005, and by 2008 decided on a career in IT. With a never-ebbing desire to cover technology, he spends most days consumed by Windows, Linux, and Android in particular. Though he has spent innumerable hours learning consumer software in general, formally and as an autodidact, and has personally authored over 10,000 articles since 2010. He is a qualified Microsoft Windows systems administrator (MSCA). Read Mathew's full biography. Mathew's social profiles: Twitter, Facebook, Instagram, LinkedIn, and Github.
« Google Bounces to $96.73; P/E Back to 19 – Nov 13, 2022» Tesla Closes Week at $195.97; Could Rise More than Google for Remainder of Year – Nov 13, 2022