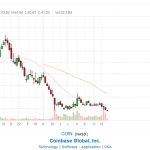 Golly, it has been difficult in the stock market over the last few months. If you made money it was more luck than skill, that is for sure. But you have to be in the market to ensure you don’t miss out on the big gains when they happen premarket, so it’s normal to be down money lately as we all wait for when that time comes.

Coinbase is a stock that flattened out which may at first appear as though most of the selling is done. However, the technicals suggest that might not be the case.

We can see in the weekly chart for Coinbase that there was a lot of selling two weeks ago, as can be seen by the large red candle stick in the screenshot. Usually, when you see such a high supply it suggests that there is plenty of selling to come.

I wouldn’t buy Coinbase just yet. We are likely going to see at least a considerable drop below today’s closing price of $41.23. The selling won’t necessarily come this week or next but the downtrend isn’t likely done yet.

The good news for Coinbase is the stock has been very volatile and plenty of demand has come in at times and rose the price significantly. The problem though is all that demand was seen before the meltdown of FTX which is set to make Sam Bankman-Fried more famous than Bernie Madoff.

Coinbase has a short float of exactly 15.00% at market close today.

Mat Diekhake is the editor of ConsumingTech.com. He has been inseparable from the internet since Web 2.0 in 2005, and by 2008 decided on a career in IT. With a never-ebbing desire to cover technology, he spends most days consumed by Windows, Linux, and Android in particular. Though he has spent innumerable hours learning consumer software in general, formally and as an autodidact, and has personally authored over 10,000 articles since 2010. He is a qualified Microsoft Windows systems administrator (MSCA). Read Mathew's full biography. Mathew's social profiles: Twitter, Facebook, Mastodon, Instagram, LinkedIn, and Github.
« Lyft Forms Multiple Bottom – Nov 16, 2022» Al Root Thinks Tesla Could Fall to $100 – Nov 22, 2022