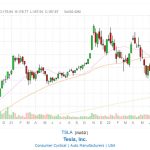 Al Root, a senior writer at Barron’s, thinks Tesla could be on its way down to $100. He cites the technicals as suggesting Tesla is still a sell and could fall much further.

I don’t agree with his opinion, but it’s noteworthy that a senior writer at Barron’s would say such a thing. It has my attention. Tesla will always be a much-loved stock until Elon Musk sells it. Interestingly, there was news recently regarding Elon having found a replacement CEO for Tesla. I don’t think that would mean Elon wouldn’t still be the owner of the company but if another executive is appointed, that is when I would sell my Tesla shares.

After the market closed the day, Tesla had a forward P/E of 29.78. Of all the tech stocks that may be recession-proof, Tesla is one of them that might hold up the strongest. Every time this stock sells off, I generally regret not having bought more. That said, it’s obviously in a technical downtrend that is yet to show signs of turning around. The next level of support is around $164 and then $147. I don’t see it going much past $147, but before making that call I would need to see what the rest of the stocks are doing. If Tesla is at $147 and the stocks are crashing because the economy is worsening, I wouldn’t buy Tesla yet.

Mat Diekhake is the editor of ConsumingTech.com. He has been inseparable from the internet since Web 2.0 in 2005, and by 2008 decided on a career in IT. With a never-ebbing desire to cover technology, he spends most days consumed by Windows, Linux, and Android in particular. Though he has spent innumerable hours learning consumer software in general, formally and as an autodidact, and has personally authored over 10,000 articles since 2010. He is a qualified Microsoft Windows systems administrator (MSCA). Read Mathew's full biography. Mathew's social profiles: Twitter, Facebook, Mastodon, Instagram, LinkedIn, and Github.
« Strong Coinbase Selling Suggest More Pain to Come – Nov 22, 2022