Flashing tools were initially developed by the companies that were associated with the device’s hardware, kept in-house, used in the back rooms of smartphone repair centers to fix common mobile device-related problems. The tools were later published on the Web for anyone to use. Now you can solve the same kinds of issues that were once left up to those repair centers: bootloops, soft-brick situations, software errors, software bugs, update errors, so forth, by downloading the software onto your computer at home instead. What’s more, installing the firmware is an easy task, thanks to the flashing tool’s user-friendly interfaces that usually require just one click before the flashing is underway.

The flashing tools, such as SamFirm_Reborn, are always computer applications. On most occasions, these apps are relatively small files and will not take up much hard drive space. While some flash tools such as Odin require you to download the files onto your computer first, the tools in this article provide the firmware for you. This means you never have to trust a third-party source for anything apart from the flashing tool itself, which is much more easily researched than each individual file you wish to flash.

Some smartphone manufacturers offer the opportunity to download the firmware directly from their websites. That’s ideal because when you download firmware online, you must be able to trust the source since you plan on flashing it to your device and you don’t want to brick it. However, some other manufacturers still do not provide firmware updates — and Samsung is one of them. Samsung also makes it difficult to download software updates manually because there is no Fastboot Mode. The only way to install firmware on Samsung is to boot into Download Mode and use Samsung’s Odin flashing tool. Odin doesn’t make it easy to flash either — if you got the firmware directly from Samsung’s servers, it will be encrypted. Though the encryption isn’t strong, it still means someone has to decrypt the firmware for you. And this is another reason you’d rather use some trustworthy tools rather than some file-scraping website.

Samsung’s strict firmware policies have led to a bevy of Samsung firmware websites that scrape Samsung’s Firmware Update Server for the latest firmware files and then offer them to those who are searching for them. While some of those sites might be reliable, it’s much safer to download the firmware files directly from Samsung themselves, and it can be done thanks to developers who create these free tools that give you direct access to the files from Samsung rather than you having to download from a third-party server.

SamFirm_Reborn is developed by Ivan_Meler who is a Recognized Developer on XDA-Developers. This means you can trust his work — and many people do. When you open this tool, it’s still called SamFirm even though the developer refers to it as SamFirm_Reborn, aka a newer version of the old tool. You can always inspect the version number of the tool from its interface, down the bottom in the notes section. This particular version we have screen captured is SamFirm v0.3.6.3. SamFirm-Reborn even offers a command-line in addition to the easy-to-use GUI. 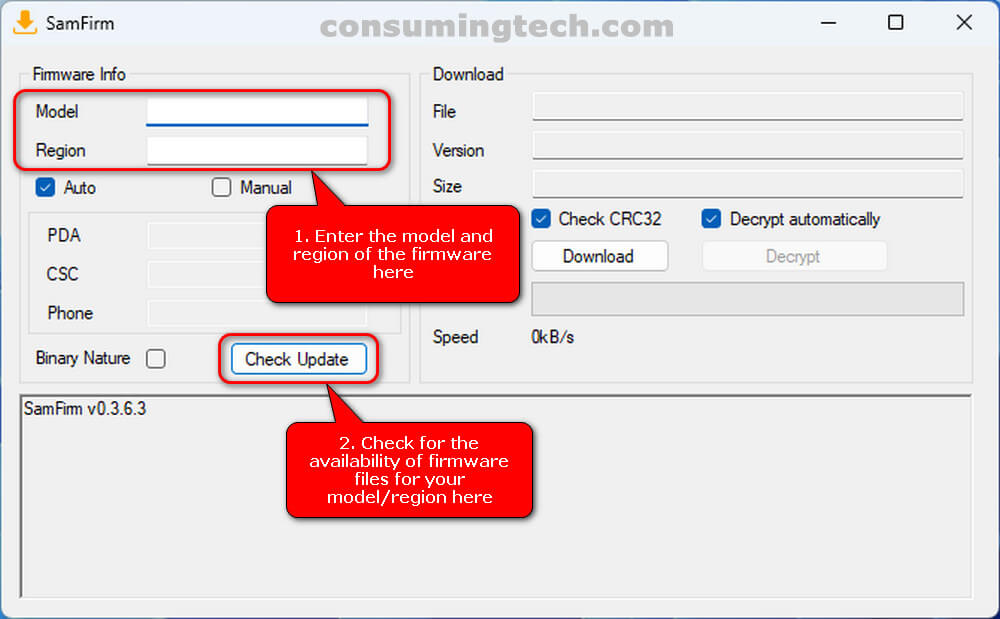 Samloader is a command-line tool that can check for firmware updates and download the decrypted firmware onto your computer, all while only requiring Python 3 on a computer, and the device model number, region, and firmware string. Many people who aren’t administrators don’t feel comfortable with the command line, though, and that’s why Zachary Wander of XDA Developers created the Samsung Firmware Downloader Tool.

BiFrost is the latest version of the Samsung Firmware Downloader by the same developer, as is shown in the bottom left corner of its GUI. BiFrost is cross-platform — you can use it on Windows, macOS, Linux, and mobile operating systems such as Android. However, each OS does require a seperate file, so be sure to download the right one. They are easily distinguishable from the GitHub page linked below.

Note: Zachery had written that he didn’t like the name “Samsung Firmware Downloader” because it was too generic and too long. This then led to the use of Samloader for the same tool. We aren’t sure where BiFrost came from, but it is the continuation of Samloader (just to avoid confusion). 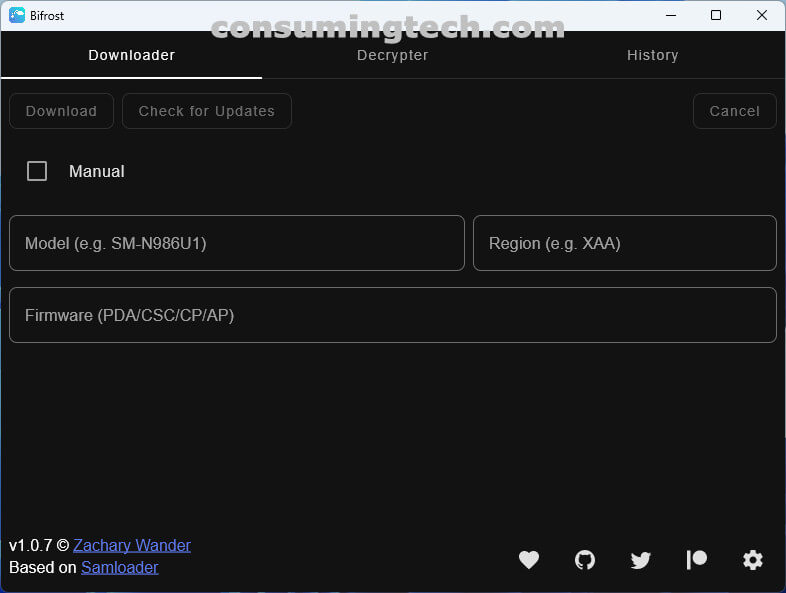 Frija is a Samsung firmware downloader and checker developed by XDA senior member and GitHub member, SlackingVeteran. Frija is similar to the other tools but unique in its ability to automatically detect the smartphone’s model number and CSC details. So if you try one of the other tools and they won’t take your model number and region, be sure to give this tool a try in its “Auto” mode before giving up. 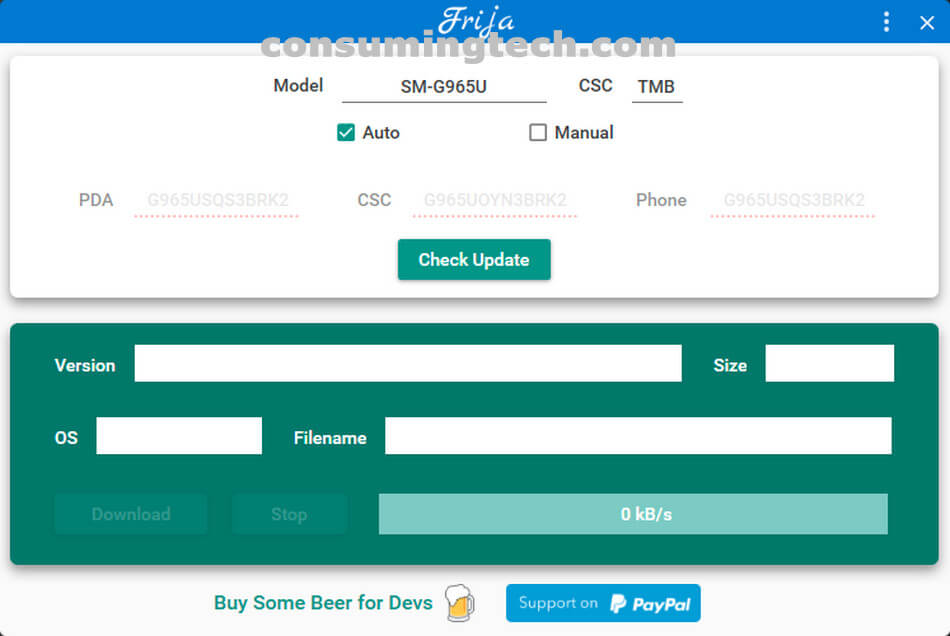 How to Unroot Samsung SM-J810Y When Installing New Firmware

There can often be a variety of ways to unroot a device that runs Android, and they depend on what method you used to get root access. If you installed SuperSU for root access, then you can open the app and find the option to unroot directly from SuperSU’s settings. On the other hand, if you do not have SuperSU, and you do have a Samsung smartphone or tablet, then you can always unroot by installing the stock firmware. Once you have followed the guide above, your device will automatically be unrooted. You can verify that is the case by installing one of the many applications from Google Play that checks for root access. As long as you are using a reliable app, then typically it will not lie about the root status of your mobile device.

Mat Diekhake is the editor of ConsumingTech.com. He has been inseparable from the internet since Web 2.0 in 2005, and by 2008 decided on a career in IT. With a never-ebbing desire to cover technology, he spends most days consumed by Windows, Linux, and Android in particular. Though he has spent innumerable hours learning consumer software in general, formally and as an autodidact, and has personally authored over 10,000 articles since 2010. He is a qualified Microsoft Windows systems administrator (MSCA). Read Mathew's full biography. Mathew's social profiles: Twitter, Facebook, Instagram, LinkedIn, and Github.
« How to Install Lenovo A7-30H Firmware Flash File» Samsung SM-T280 Firmware (Flash File)