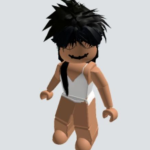 Roblox CNP (copy and paste) characters are an enemy force in Da Hood. CNP characters look alike (hence their name), and are an enemy because they are in most instances going to be abusive toward you. They are known to be purposefully racist and sexist, among other things, and you will see plenty of them around, though not so many that it would be overwhelming. Some claim they are becoming extinct. If that were to be the case, it might be because the cancel culture has had enough of them. However, I still see plenty of them around the streets.

CNPs are known as the female version of Slenders. They are as disliked as Slenders; however, all CNPs are indeed female, which makes them a unique bunch. Anyone can become a CNP player; all it means is they have adopted a certain style avatar (pictured). If you want to become a CNP, you can still have your unique character name. There can also be small differences between CNP characters. For instance, one may be smiling while the other is frowning; it’s only the general look and their hair that is always the same; the emotions of the characters can change. You can still have slight variations of physical appearance. There are two hairstyles CNPs can choose from for instance. But generally speaking, there aren’t many variations of accessories for these characters.

On Roblox, you can scroll through the list of known CNP players. Most of them are often offline these days, which might be what other sources are talking about when they refer to them as going extinct. But there are many CNP players still out there lurking and waiting to potentially come back online to hurl their next disrespectful display of abuse in public. There are no exact rules to how a CNP character will act in public; they are given the freedom to be as abusive to others as they like. It’s only how they look that makes them a CNP character. So technically, it’s possible to come across a kind CNP, though it is not likely.

There are many different groups of Roblox characters who each share characteristics. The CNPs are no different from any other Roblox group in that regard. That said, CNPs are arguably more distinguishable than other groups.

Are you a CNP in Roblox? Do you know any CNP characters in Roblox? Let us know in the comments below.

in Question and Answer 2 Comments

Mat Diekhake is the editor of ConsumingTech.com. He has been inseparable from the internet since Web 2.0 in 2005, and by 2008 decided on a career in IT. With a never ebbing desire to cover technology, he spends most days consumed by Windows, Linux, and Android in particular. Though he has spent innumerable hours learning consumer software in general, formally and as an autodidact, and has personally authored over 10,000 articles since 2010. He is a qualified Microsoft Windows systems administrator (MSCA). Read Mathew's full biography. Mathew's social profiles: Twitter, Facebook, Instagram, LinkedIn, and Github.
« How to Enable OEM Unlock without Developer Options on Samsung» What’s EmuOS?