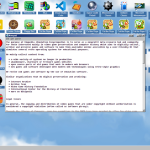 When you hear the words “operating system” you assume it’s either Windows or an alternative to Windows. However, that’s not always the case. Sometimes operating systems can be designed to offer you only one thing, such as gaming for instance. EmuOS allows you to boot Windows 95, Windows 98, or Windows Me, so you can play a list of retro games from the loaded OS.

Often installing an operating system is an ardeous task and requires a virtual machine and a lot of tech knowhow. Thankfully, none of that is required to run EmuOS. All you need to do is visit the https://emupedia.net/beta/emuos/ URL directly from your web browser (Ideally Chrome, Firefox, or Edge), and then the OS and games load from there.

Here is how EmuOS describes itself:

The purpose of Emupedia (Emulation Encyclopedia) is to serve as a nonprofit meta-resource hub and community for those interested mainly in video game preservation and computer history which aims to digitally collect, archive and preserve games and software to make them available online accessible by a user-friendly UI that simulates several retro operating systems for educational purposes.

We revive old games and software by the use of emulation software.

Similar organizations that do digital preservation and archiving:

I have spent all of today so far with EmuOS before I started to write this article. And I thoroughly enjoyed playing many of the EmuOS games. The operating system I chose to run was Windows 95 because it was the most nostalgic for me. Though, I don’t think it matters which one of the three you choose, that was the first decent operating system I remember in my family home. And as soon as I opened up EmuOS, I saw many games I instantly remembered. Classics like Doom 1, 2, and 3; Wolfenstein 3D; Worms Armageddon; Microsoft Solitaire, and Microsoft Minesweeper are all games I know I played around those years. However, I was surprised to see other games such as Jetpack Joyride, Fruit Ninja, and Tomb Raider included in this collection as well. There’s even the original Street Fighter Alpha that I played on Nintendo. You can also find games like PacMan and Pong if you want the oldest of classic games. And of course, no good retro game collection would be complete without Mario and Zelda. All of these titles and many more are available for you to play directly from your computer and browser that you sit behind right now. All you have to do is visit the emupedia.net URL.

The first game I started to play with EmuOS was Wolfenstein. I wouldn’t have guessed that would have been my choice but once I had EmuOS open on my screen, the memories came flooding back. I played Doom a lot as well but Wolfenstein was certainly one of my very favorite games to play back in those days. I had quite a lot of trouble with my controls in the beginning. Luckily I found a button at the bottom of the EmuOS screen that popped up a chat window where I found roughly 250 players already using EmuOS as well. This was mainly a comfort thing because none of them gave me great tips, but somehow I managed to unlock my keyboard so that it would work. Once my keyboard started working, I was walking around in the game with the standard arrow keys and opened doors with my spacebar. So there’s nothing too unusual to know about the controls once you get past that initial unlock phase.

I’m not the kind of guy to spend a thousand dollars on a retro arcade game because I can’t think of anything else I would prefer to do (I’m currently trying to beat the rest of CyberPunk 2077 when I can find the time). But I admire these people and know that retro games can be worth a lot of money. EmuOS won’t be my favorite website, but it is a website I certainly wouldn’t mind visiting again. I found no bugs when I played and was very impressed with the OS and games.

I’m interested to hear about your experience with EmuOS in the comments below.

in Question and Answer 2 Comments

Mat Diekhake is the editor of ConsumingTech.com. He has been inseparable from the internet since Web 2.0 in 2005, and by 2008 decided on a career in IT. With a never ebbing desire to cover technology, he spends most days consumed by Windows, Linux, and Android in particular. Though he has spent innumerable hours learning consumer software in general, formally and as an autodidact, and has personally authored over 10,000 articles since 2010. He is a qualified Microsoft Windows systems administrator (MSCA). Read Mathew's full biography. Mathew's social profiles: Twitter, Facebook, Instagram, LinkedIn, and Github.
« Roblox CNP» Firestick Download Folder