The following tutorial demonstrates all the different ways in which you can open the Internet Explorer browser when using a version of the Windows 10 operating system. Note that this tutorial also includes how to enable and disable Internet Explorer because if it is disabled on your computer then you will not be able to follow any of the methods to open it.

Although Microsoft had developed a newer web browser, Internet Explorer was still available to use in Windows 10 when users made the upgrade; and in fact, IE 11 is still available to be opened today if you were to search for it from the search box in the taskbar.

IE being available is important for some people because many had gotten to know it over the years and still enjoyed using it. At some point those people will have to make the switch over to a newer browser such as Microsoft Edge however because the development of IE 11 has stopped, i.e., the IE browser has been discontinued. This will eventually lead to incompatibility problems as you always need to update a browser so that it works with the newer software that is attempting to be shown on it. There’s also the chance it will become a security risk as well.

But for the time being, there’s nothing wrong with using IE 11. Due to its popularity, it’s not uncommon for Windows users to open it up and check it out or use it as a second or third browser for some tasks they wish to be separated from their main daily browser. And there are some advantages to IE 11: websites tend to appear closer up when viewing from laptops than some alternatives, no toolbars are taking up unnecessary screen real estate, and it has tabs beneath the address bar which is unique to modern browsers for no particular reason.

Windows 10 always shipped with a new browser that Microsoft wanted to supersede Internet Explorer called Microsoft Edge. Though Edge has had its problems, there’s little doubt it’s going to supersede IE now because Microsoft has announced IE won’t be supported for much longer. Once it is no longer supported by Microsoft developers, Edge will be the only option left if you want to use a browser made by Microsoft. Thankfully for IE users though, Microsoft still cared enough to provide several ways to get access to IE from the last version of the Windows operating system that is to support it.

How to Open Internet Explorer in Windows 10

Provided the browser hasn’t been disabled from the Windows Features dialog box, there are three ways you can open the Internet Explorer browser around the Windows 10 operating system. Here is where you can find them:

1. How to open Internet Explorer via Search

Note: Due to Microsoft wanting you to start using Edge, they put the Edge app above Internet Explorer even though you searched for IE. This is a hint that they want you to use it. However, Internet Explorer should always still remain listed there, right up to Windows 10’s final release builds (we know this because we are running one of them right now). 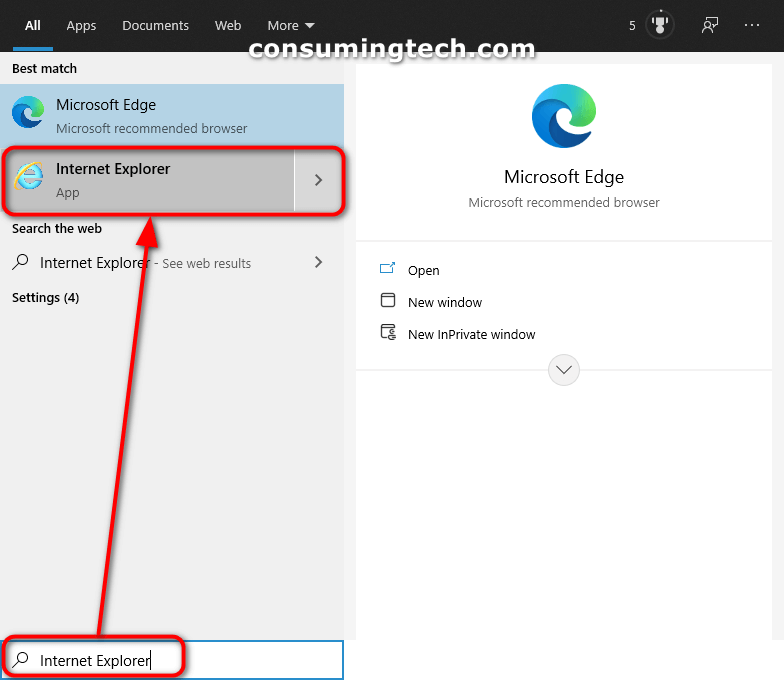 2. How to Open Internet Explorer via All Apps List

a. Click on the Start button in the taskbar to open the Start menu and then scroll down to W in the list of All Apps and click on Windows Accessories, followed by Internet Explorer. 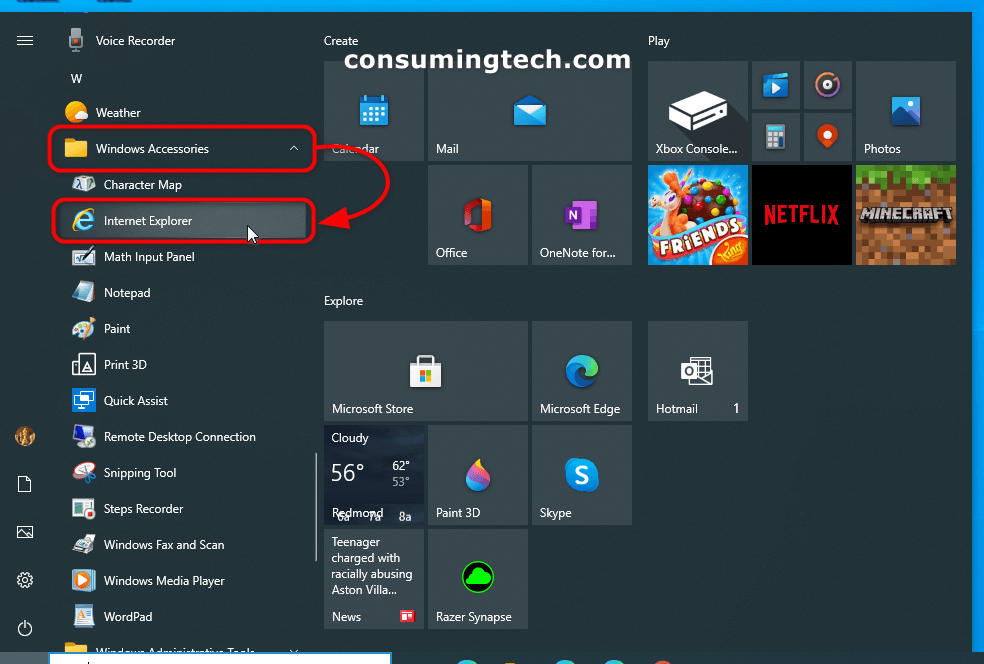 3. How to Open Internet Explorer via File Explorer 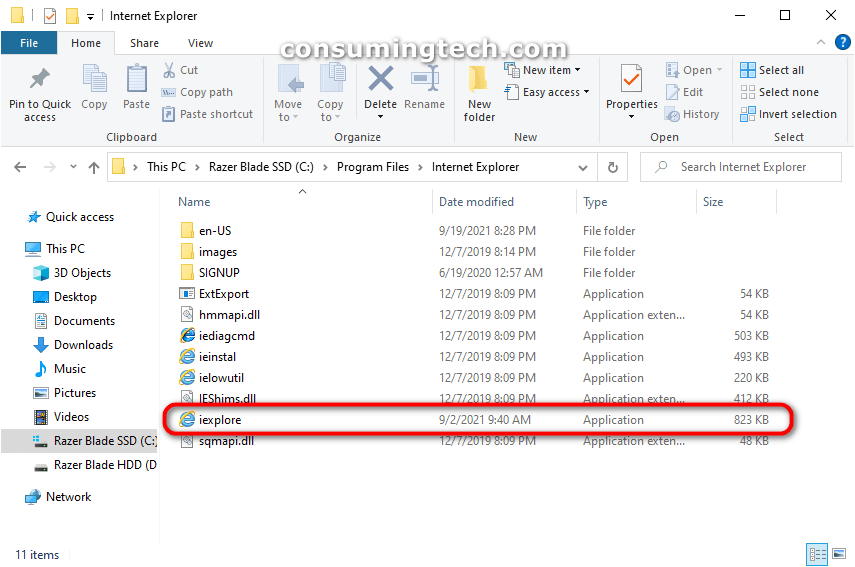 In conclusion, that is all the different ways you can open the Internet Explorer 11 browser around the Windows 10 operating system.

Mathew is a qualified Microsoft Windows systems administrator (MCSA) who has covered OSs, browsers, the internet, and related tech since 2011. He is the founder and editor of ConsumingTech.com and is a freelance tech writer for various publications around the Web. Mathew graduated from DDLS Melbourne (now Lumify) in 2011. He grew up in Melbourne and lives in rural Victoria, Australia. Read Mathew's full biography. Mathew's social profiles: Twitter, Facebook, Mastodon, Instagram, LinkedIn, and GitHub.
« Import/Export Internet Explorer 11 Favorites with HTM in Windows 10» Turn On/Off and Customize Snap Windows in Windows 10