This update includes files and resources that address issues that affect the update processes in Windows 10 that may prevent important Windows updates from being installed. These improvements help make sure that updates are installed seamlessly on your device, and they help improve the reliability and security of devices that are running Windows 10.

Starting from build KB4023057, Windows 10 will automatically compress files to free up more space in your user profile directory if Windows Update is not able to install its important updates. While this means you lose some control of Windows operations, no one should complain given that it will automatically do what is wisest.

If a file has been compressed, they appear with two blue arrows, each facing each other, as a signal to the compression that has taken place. These blue arrows could possibly appear on your computer as larger or smaller depending on how you’ve customized the settings for File Explorer. Those who haven’t made changes will see the blue arrows as the default size which is shown in the screenshot below.

From Microsoft: After you install the update, your files are restored to their original state, and the blue arrows disappear from the file icons in File Explorer. At any point during the update process, you should be able to access your files. 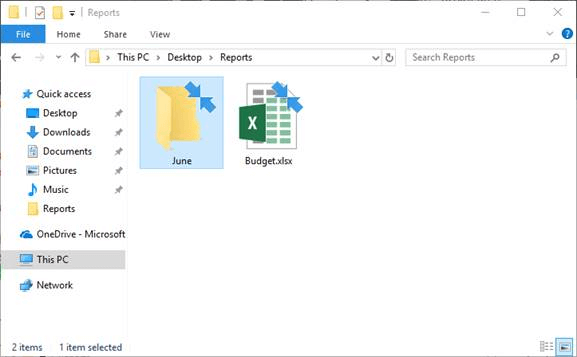 One of the more confusing aspects of owning a computer is knowing what to do if you are short on hard drive space. In fact, for many it will be the only reason for anxiety. Microsoft is now trying to ease those concerns by giving a notification to the Action Center for any computer that it thinks may be running low on space. (Note this space is regarding the overall hard drive space and not just space for Windows Update like in the compressing files section above.) By clicking the This PC is running low on space notification, it will direct you through to Microsoft Support URL in the default browser with contact options for Microsoft support to assist you in freeing up that space.

Despite speculation Disk Cleanup was being removed, it is still being enhanced with more features and that is a good thing because in our opinion it should remain a feature for the foreseeable future. Disk Cleanup is being updated to show you an extra option for freeing up disk space. This new feature is specifically for needing to clean up disk space to install new Windows features. If a Windows update cannot install, you can open Disk Cleanup and look for the new option Free up space now in Settings/Storage. 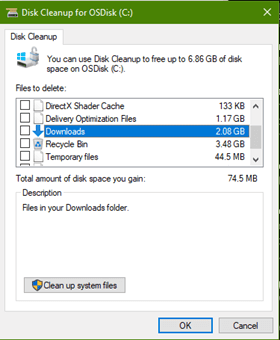 An example of what the Free up space now feature looks like: 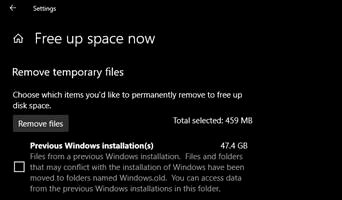 This update will be downloaded and installed on computers like a regular Windows update. You can get the standalone package from the Microsoft catalog.

Mathew is a qualified Microsoft Windows systems administrator (MCSA) who has covered OSs, browsers, the internet, and related tech since 2011. He is the founder and editor of ConsumingTech.com and is a freelance tech writer for various publications around the Web. Mathew graduated from DDLS Melbourne (now Lumify) in 2011. He grew up in Melbourne and lives in rural Victoria, Australia. Read Mathew's full biography. Mathew's social profiles: Twitter, Facebook, Mastodon, Instagram, LinkedIn, and GitHub.
« Windows Security App Explained (Windows 10)» Vivaldi Updated to Version 3.8.2254.3 to Coincide with Chromium 90.0.4430.58; Also Brings Fixes