If you’ve ever tried to flash files to your Samsung device, then you might have come across the Odin flashing tool.

Samsung doesn’t talk much about Odin (if ever at all) because its existence was meant to be kept behind closed doors. As the story goes, Odin was developed for Samsung employees to use themselves in situations such as to fix problems in Samsung service centers. After a while, one of the team leaked Odin out on the web for Samsung enthusiasts to see and then it was soon going viral around many Samsung web forums and fan websites. Now just about all people who love Samsung and dabble in flashing stock ROMs, custom ROMs, rooting files and custom recoveries images will already be familiar with it as it has at least tens of thousands of people flashing with it every day. 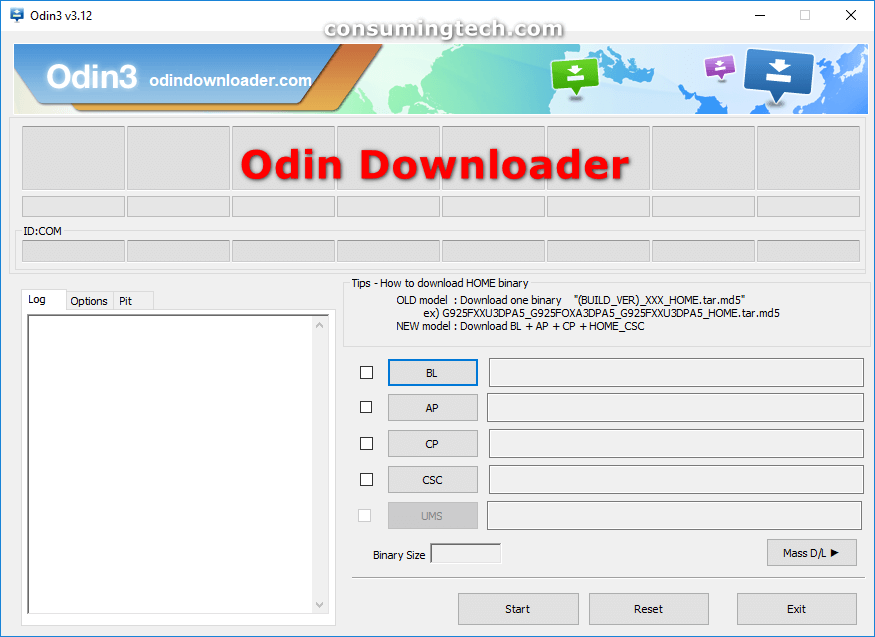 Odin Downloader is typically straightforward to use: just keep it on the default settings, upload your files correctly and then click the button to begin flashing whatever it is to your device. But there are exceptions, so you should always look for the right guide for what it is you’re trying to do before just going ahead and doing it. You’ll notice some buttons from Odin’s interface that will take some learning before you can use them, such as the “Repartition” box that should always be left unchecked unless you know you definitely need to repartition your device.

Apart from that, there isn’t much to learn. You’ll probably want to download the latest version of the tool if you’re new to flashing files to your device. The latest version is going to be the one that is compatible with more software and devices. But then again, the exact details are anyone’s guess since Samsung doesn’t offer any changelog notes.

Flash Stock Firmware. You can flash stock firmware files using the Odin downloader. Samsung is one of the easiest sources to find firmware packages online. There are long-running reliable source such as Sam Mobile that host just about every Samsung firmware out there. In more recent times, other sites have started to provide credible links to these same firmware files as well, including ourselves. Flashing official firmware files is usually done to help troubleshoot problems that were still there after all other solutions weren’t able to get the job done. You may wish to try hard resetting your Samsung device before you to go the effort of flashing the firmware.

Flash Custom Firmware. The Odin Downloader can also flash custom firmware aka what people in the Android community often refer to as custom ROMs (firmware is a more commonly used term but for some reason, the “custom ROM” is the one that gets mostly used by modders these days.) Custom firmware differs from stock firmware in the sense that it has been tinkered with by third-party developers who wanted to create something different for users that steps away from the stock Android experience. Regardless of the ROM—whether it be a custom or stock version—the Odin Downloader can flash it, provided it’s the right file type.

Get Root Access. You can flash certain root packages such as CF-Auto-Root from the Odin downloader. More specifically, the tar and MD5 file formats work well.

Flash Custom Kernels. A popular alternative to custom ROMs is custom kernels. Should you choose to flash a kernel and not a ROM yourself, you would be flashing just the kernel instead of the full ROM. This is common among people who want to overclock devices to eke out extra performance but without changing any of the features.

Like with your firmware files, you’ll still need to make sure the rooting file you try to flash using Odin is actually made to work for Odin. For instance, the tar.md5 files that come with the CF-Auto-Root files are ones that are compatible with Odin.

Once you’ve got your hands on a file that you know is made to work with Odin, then it will never let you down, no matter what Samsung device you own—it’s a flashing tool that’s made to work universally with every Samsung smartphone and tablet in mind. If you’re finding that Odin isn’t working as intended, then try downloading a different version of the flashing tool and giving it another go. Sometimes one version won’t flash the files to your device whereas another one will.

In conclusion, that is how to download the Odin downloader.

Mat Diekhake is the editor of ConsumingTech.com. He has been inseparable from the internet since Web 2.0 in 2005, and by 2008 decided on a career in IT. With a never-ebbing desire to cover technology, he spends most days consumed by Windows, Linux, and Android in particular. Though he has spent innumerable hours learning consumer software in general, formally and as an autodidact, and has personally authored over 10,000 articles since 2010. He is a qualified Microsoft Windows systems administrator (MSCA). Read Mathew's full biography. Mathew's social profiles: Twitter, Facebook, Instagram, LinkedIn, and Github.
« Download Micromax Flash Tool» Download: SUT L3 Tool (All Versions) [Links]