The Oppo Find 7 smartphone was the successor to the Oppo Find 5 and it did a pretty good job at picking up where its predecessor left off. It came with a 5.5-inch display (big for a smartphone screen back then) and was also one of the first smartphones out on the market to come with a Quad HD display (2560×1440.)

The Oppo Find 7 arrived with the ANdroid 4.3 Jelly Bean software update out of the box–a far cry from what you will get the chance to run if you choose to swap your stock version of Android over to a custom ROM. The 2.5GHz Qualcomm Snapdragon 801 processor, with 3GB RAM that the Oppo Find 7 is underpinned by is more than enough to handle any of the custom ROMs and their features that you will find in the list below. Some ROMs are running on the Android Marshmallow update which should make plenty of owners happy. 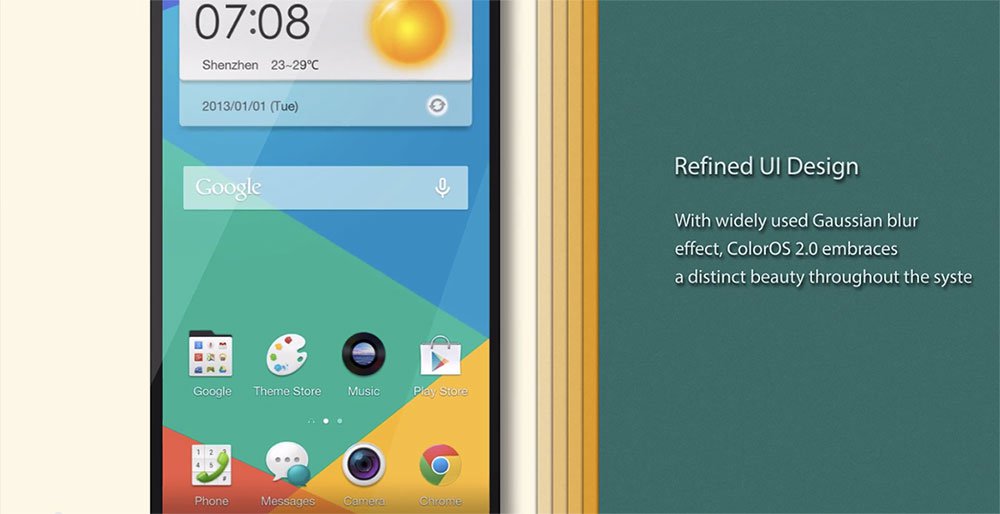 ColorOS is an operating system that you can find on some Oppo devices. At the present day, it is the ColorOS 3.0 that is doing the rounds and very popular, having had several improvements over the older ColorOS 2.1. It is the 2.1 version up for grabs here, but the 2.1 was a pretty good ROM in its time.

Mokee is a name that many people are familiar with because they make custom ROMs for a bunch of different manufacturers and not just Oppo. You’ll also find a bunch of unofficial versions popping up all over the place which means some developers have ported the official version of the ROM. That isn’t the case here, however. You do get the official version of the Mokee custom ROM. Whats more it’s also based on the Android 6.1 Marshmallow software updates, which is considerably newer than the ColorOS that wasn’t even Android 5.1 let alone a Marshmallow build.

Some of the standout features of Android 6.0 and Android 6.0.1 Marshmallow include native fingerprint reader support, a 4K display mode for applications, multi-window feature that mimics Windows’ Aero Snap feature, automatic backups of all your data and easy restoring of it later, emoji updates, doze mode and double tap power button to open up the camera.  Some of the standout features of the Mokee custom ROM up for grabs here include a new listview animation, updates can still happen over the air, its own Mokee boot animation, new “intelligent” control settings, settings that add speed data network, new settings included in the statusbar, and settings for the navigation bar as well.

The SlimSaber custom ROM is available for the Oppo Find 7 smartphone if you want to give it a try. From what we can tell, this is the official version of SlimSaber. It’s only based on the Android 5.1.1 Lollipop software update that rolled out as early as April 2015, so it’s not as new as some others out there that you could install. That said, official ROMs are always wort ha try if the other options haven’t tickled your fancy.

There are a few things you need before you can install this custom ROM like the “Nameless” version of Team Win’s TWRP Recovery before you can flash it. You can find the rest of what is required after you visit the download link. If there’s anything else you want to know, feel free to leave a comment on the thread when you visit the download link as well. Someone usually replies with a constructive answer.

The HydrogenOS H2 custom ROM is available for the Oppo Find 7 smartphone as well. It is an official version of the ROM. It’s not downloaded as often as some of the others, but it’s still a good ROM, particularly if you wanted something that comes pre-rooted. Root access means you can begin installing any of the root applications that are out there and there is an abundance of them. We’ve often covered many details about them in our other rooting guides if you want to check out them.

HydrogenOS is based on the Android Open Source Project version 1.1. You can expect anything that is based on AOSP to come pretty clean without much bloatware if any at all. Although there are no exact details from the developers of this custom ROM about it being debloated from what we can see. What we do know though is that while being an official ROM, it never got out of its beta stages, meaning it’s not something you should consider installing on your phones that you use for work-related purposes just in case too many bugs ruin your day.

XenonHD is a similar prospect to the HydrogenOS custom ROM available above. The XenonHD custom ROM is official and labeled as stable, but it never got out of its beta stages. Even though the developers are calling it stable, you need to be careful with anything that is in its beta stages.

The XenonHD custom ROM was based on the Android 5.1.1 Lollipop software update (R3), so you get all the bells and whistles you would come to expect from the official Android version under the same name. We mentioned earlier that Android didn’t do much between Android 5.0.1 and the end of Android 5.0.2, but there was a huge jump in features once Android 5.1 came around in comparison to Android 5.0. There is not much of a difference between the end of Android 5.1.1 and the beginning of Android 5.1, though. In fact, the only noteworthy changes included native WiFi calling support. The rest was just all bug fixes that rolled out.

If Android 4.4 KitKat was your favorite version of Android, then you might be interested in installing the KaKulayOS custom ROM. The KaKulayOS ROM has been around since about mid-2014, so it isn’t getting much love anymore, but it’s still a reliable ROM.

Android 4.4 has heaps of features included in it, and there were also quite a few updates before Lollipop came around. It’s not known exactly what version of Android KitKat it has been updated to, so it’s hard to say what features you’ll get. The download link does suggest that it has been updating to something from the original Android 4.4 so at the very least you’ll have the extras that were included in the Android 4.4.1 software update. The additional features that become available in Android 4.4.1 were the improved application compatibility with Android Runtime (ART), the camera application started loading the GooglePlus photos, and some other bug fixes. In other words, nothing too noteworthy since Google Plus has probably seen its last attempt at ever taking off and becoming a popular social media site that rivaled the likes of facebook and Twitter.

Mat Diekhake is the editor of ConsumingTech.com. He has been inseparable from the internet since Web 2.0 in 2005, and by 2008 decided on a career in IT. With a never-ebbing desire to cover technology, he spends most days consumed by Windows, Linux, and Android in particular. Though he has spent innumerable hours learning consumer software in general, formally and as an autodidact, and has personally authored over 10,000 articles since 2010. He is a qualified Microsoft Windows systems administrator (MSCA). Read Mathew's full biography. Mathew's social profiles: Twitter, Facebook, Instagram, LinkedIn, and Github.
« Best Custom ROMs for Xiaomi Redmi 3» Best Custom ROMs for Huawei P9 Lite