The biggest Windows 10 update to arrive in 2017, codenamed Redstone 3, brought about with it many new features. One of the slightly more peculiar ones is the People icon in the taskbar.

The idea behind it is to offer a way for people to get quicker access to contacts that the user wants to have pinned to the taskbar, easily accessible by clicking on the People icon. In here you can also find access to applications that you want available for quicker access as well—by default everyone gets the applications that Microsoft owns and wants people using, such as the Mail app, Skype, and People app.

Most people don’t find the People icon very useful here . . . when they go to communicate with people they do it inside of applications, such as the Windows 10 Mail app or just another application that they use for messaging. And those apps have done a pretty good job at making it easy to find people whom you want to send messages or emails to: the worst case scenario being email, where you just start typing in the first few letters of the persons name and then it comes up automatically with the full email address. 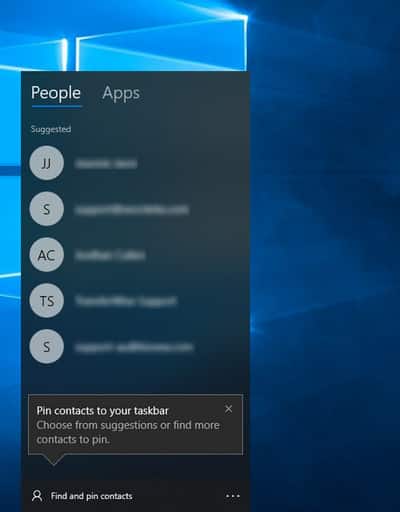 In addition to the People icon not being used much, it does add weight to the operating system just to have it there, not to mention some extra clutter in the system tray region. Then there are the people who have a slight case of OCD and just don’t want the sight of an icon being there that they don’t like or use. Whatever the case may be, there is a way in which you can remove the People icon from the taskbar/system tray if you want it gone.

Microsoft is no stranger to putting things on the taskbar that people don’t want there, but then again, you also have people who had found useful features available from there and wished they could have them back again when they went missing, as was the case when OneDrive went absent from the system tray for some people. Unlike with OneDrive, the People icon is much simpler to remove (and get back again, if you ever change your mind).

Microsoft makes it a cinch to add or remove the new People icon from the taskbar in Windows 10. Here is how you can do that: 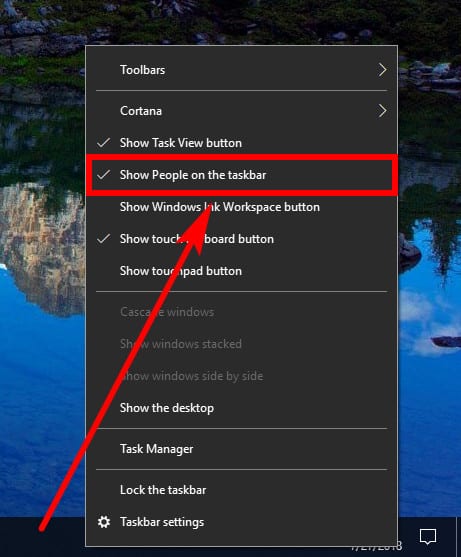 How to Add or Remove People Icon from Taskbar Using Settings

You can also venture into the Settings application and remove the People icon from the taskbar that way instead if you prefer. Here is how you can do that:

1. To get started doing it this way, head to the Start menu > Settings > Personalization > Taskbar and then scroll down the right side pane until you see the People — show contacts on the taskbar toggle.

2. Windows 10 is no stranger to swapping features around within the Settings application, but this is one that has, so far, stood the test of time. 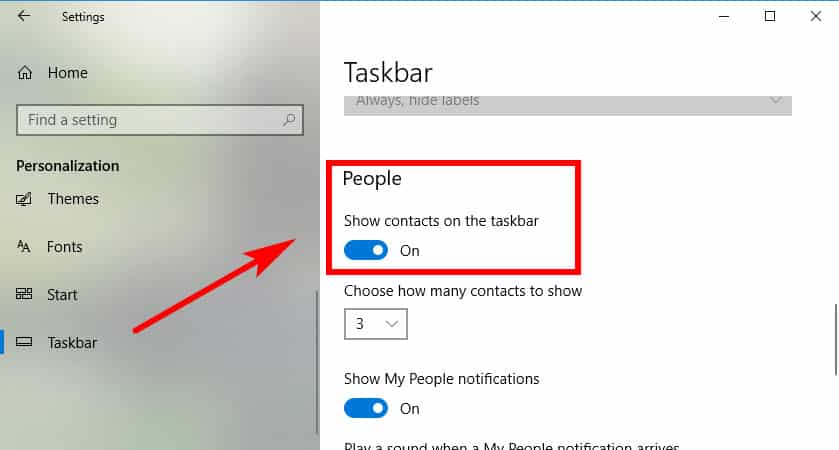 If you’re reading this article in some time in the future and both options above are no longer active, you will likely always be able to venture into the Registry, provided that you’re logged in as an administrator. Here is how you can do that:

1. Get started by opening the Registry Editor: press the Windows logo key + R to open the Run dialog box and then type Regedit and hit the OK button.

2. Now navigate to the following key within the Registry, by using the navigation in its left side pane: 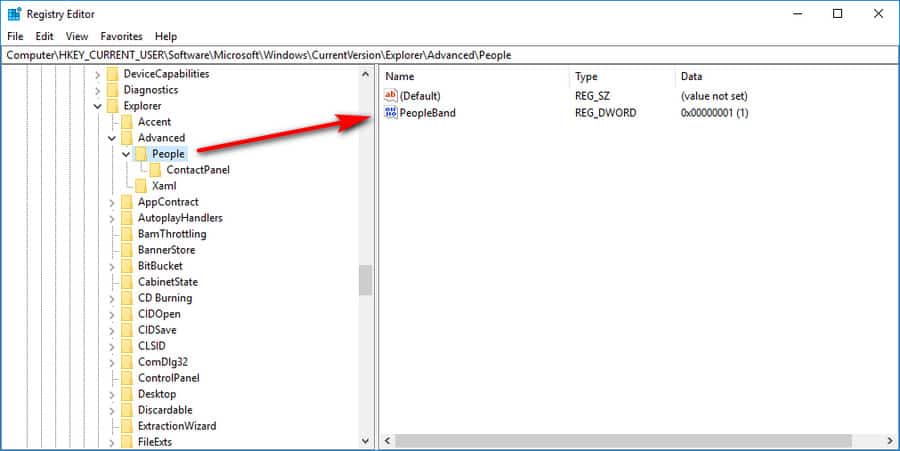 3. Double-click on the PeopleBand entry in the right side pane and then change the value data to 0 if you want the People icon removed.

Adding the value data of 1 will enable it again. 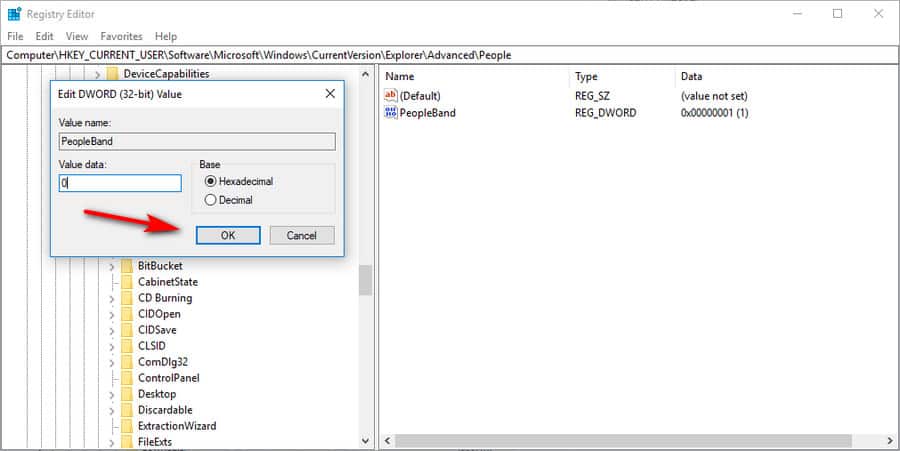 At the end of the day, it doesn’t matter what way you choose to enable and disable the People icon: they all will do the same thing which is reliably enable or disable it until you change your mind again. But if the quicker ways happen to stop working in the future, you always have the option of entering the registry and getting it done that way instead.

Mathew is a qualified Microsoft Windows systems administrator (MCSA) who has covered OSs, browsers, the internet, and related tech since 2011. He is the founder and editor of ConsumingTech.com and is a freelance tech writer for various publications around the Web. Mathew graduated from DDLS Melbourne (now Lumify). He grew up in Melbourne and lives in rural Victoria, Australia. Read Mathew's full biography. Mathew's social profiles: Twitter, Facebook, Mastodon, Instagram, LinkedIn, and Github.
« Enable Windows Photo Viewer in Windows 10» Turn Off/Disable User Account Control (UAC) in Windows 10