Home » News » 2014 HTC One Verizon Back Cover Has Leaked, Stamped with Verizon

2014 HTC One Verizon Back Cover Has Leaked, Stamped with Verizon 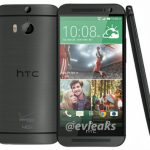 We already know that the 2014 HTC One was going to get much coverage by all the major US phone carriers, and now we can confirm that it will also be coming to Verizon. Because it is HTC’s flagship there was no doubt big names like AT&T and Verizon were going to get it, and now we can confirm one of them thanks to a leaked back plate of the handset that shows the Big Red brand name. As the second largest carrier in the United States, Verizon is not going to be the end of the line for this Smartphone. It will go further down the list of names to companies such as Sprint and T-Mobile US. The rest of the names are a lot smaller with U.S Cellular being about a tenth of the size of its nearest competition, but hopefully, they can also sell these handsets.

As we mentioned before, it is not surprising that the second largest subscriber of mobile phones with 102.8 million people is going to be getting this year’s flagship model that our favorite Taiwanese manufacturer of smartphones is producing, but we can confirm it now for all of you out there who wish to pencil it in. We fully intend on filling you in on the rest of the companies as soon as that news breaks. The only other one we know of now is Telus which plans on unveiling its model on the 25th of March.

It is widely expected that this year HTC One will have a 5-inch screen with a 1080 x 1920 resolution. The new size makes it 0.3 of an inch bigger than the 2013 version. There’s also a soon-to-be outdated quad-core 2.3GHz Snapdragon 800 CPU, and 2Gb of RAM. We love that it will have a MicroSD card slot so having extra storage and backing up becomes very easy.

It lacks anything special to tell your guys. Last year we saw the iPhone 5S revolutionize unlocking with the inclusion of a fingerprint scanner and this year’s Samsung Galaxy S5 coming in June will have a fingerprint sensor of its own. This handset known as the M8 is not carrying anything unique, but it will have two rear cameras and one front-facing camera giving it a total of three. That’s unique compared to anything else we’ve seen, and hopefully, it’s enough to attract plenty of buyers and keep them satisfied until next time.

Because “The All New One” is only just around the corner from being released, the unlocked 2013 edition sees big price drops if you are looking to buy a handset that’s a bit cheaper.

Mathew is a qualified Microsoft Windows systems administrator (MCSA) who has covered OSs, browsers, the internet, and related tech since 2011. He is the founder and editor of ConsumingTech.com and is a freelance tech writer for various publications around the Web. Mathew graduated from DDLS Melbourne (now Lumify) in 2011. He grew up in Melbourne and lives in rural Victoria, Australia. Read Mathew's full biography. Mathew's social profiles: Twitter, Facebook, Mastodon, Instagram, LinkedIn, and GitHub.
« Apple Releases iTunes Festival 5.0 Revamped To Better Suit iOS 7 Before The SXSW Music Festival Begins March 13» Vodafone, Telstra & Optus HTC One Gets Android 4.4 KitKat