Home » Question and Answer » What Is Fastboot OEM Unlock?

What Is Fastboot OEM Unlock? 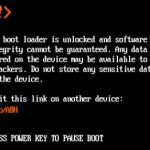 Though more Android smartphones are coming with unlocked bootloaders now than ever before, most of them still come with locked bootloaders, meaning you are unable to install custom firmware out of the box.

fastboot oem unlock is the Fastboot command you enter into the command line on a Windows computer that will unlock the bootloader on your smartphone. The same command will also wipe all data at the same time, so you must back up your device before running the command.

Mat Diekhake is the editor of ConsumingTech.com. He has been inseparable from the internet since Web 2.0 in 2005, and by 2008 decided on a career in IT. With a never ebbing desire to cover technology, he spends most days consumed by Windows, Linux, and Android in particular. Though he has spent innumerable hours learning consumer software in general, formally and as an autodidact, and has personally authored over 10,000 articles since 2010. He is a qualified Microsoft Windows systems administrator (MSCA). Read Mathew's full biography. Mathew's social profiles: Twitter, Facebook, Instagram, LinkedIn, and Github.
« How to Download Warzone on Nintendo Switch» How to Unlock Bootloader without OEM Unlock?