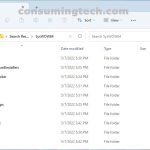 If you are looking for a SysWOW64 virus removal tool, you’re out of luck because SysWOW64 isn’t actually a virus. Though the name looks suspicious, SysWOW64 is an essential component of the Windows operating system so it’s perfectly normal for it to be visible from locations such as the Task Manager. SysWOW64 is also a fold in File Explorer located here: C:\Windows\SysWOW64.

Here is a quote from JohnCTX-6479 on the same Microsoft Learn page:

The three Windows Operating System folders: System, System32, and SysWOW64 may have one thing in common. They are critical for its functionality of how they interact with Users within the shell and the graphical user interface.

In conclusion, the SysWOW64 might not be on all editions of Windows if you include the 32-bit versions, but generally you find it on all 64-bit versions. And it’s critical for Windows to function, so don’t remove it.

in Virus Removal No Comments

Mathew is a qualified Microsoft Windows systems administrator (MCSA) who has covered OSs, browsers, the internet, and related tech since 2011. He is the founder and editor of ConsumingTech.com and is a freelance tech writer for various publications around the Web. Mathew graduated from Lumify Melbourne in 2011. He grew up in Melbourne and lives in rural Victoria, Australia. Read Mathew's full biography. Mathew's social profiles: Twitter, Facebook, Mastodon, Instagram, LinkedIn, and GitHub.
« 9convert Removal» YT5s.com Virus Removal