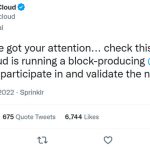 Back in November, it was announced that Google Cloud had partnered with a blockchain. That blockchain turned out to be Solana. Solana was one of the first blockchains to offer smart contracts, although its critics say it is not as decentralized as other blockchains that offer similar functionality such as Ethereum. Google seemingly doesn’t see that as much of a deterrent.

As a general rule of blockchain investing, you want to invest where the developers are choosing to head. Usually this means counting how many developers a blockchain has. However, arguably even more important in the short term is watching where the big tech titans go. Google has chosen to go to Solana.

Cryptocurrencies have been in a bear market for nearly two years now, with most of the declines coming over the past 12 months. You can expect the bear market to be over at the same time as the stock market bear market bottoms. And Solana might be one of the best cryptocurrencies to buy on that dip for investors with a long-term time horizon.

Now that we got your attention… check this out: Google Cloud is running a block-producing @solana validator to participate in and validate the network.

Mat Diekhake is the editor of ConsumingTech.com. He has been inseparable from the internet since Web 2.0 in 2005, and by 2008 decided on a career in IT. With a never-ebbing desire to cover technology, he spends most days consumed by Windows, Linux, and Android in particular. Though he has spent innumerable hours learning consumer software in general, formally and as an autodidact, and has personally authored over 10,000 articles since 2010. He is a qualified Microsoft Windows systems administrator (MSCA). Read Mathew's full biography. Mathew's social profiles: Twitter, Facebook, Instagram, LinkedIn, and Github.
« Motley Fool Calls Alphabet Once in Decade Buying Opportunity» Match Group to Benefit from Metaverse Dating