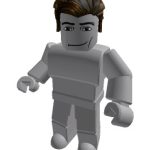 When you create a new Roblox account you are by default given the Man Face provided the account details specified are of the male or unspecified agenda. The Man Face can also be downloaded for free from the Roblox avatar shop as part of the Man Bundle. So if you are unable to copy and paste it, head to the avatar shop instead where you can download it for free.

The Man Face avatar has been downloaded well over a million times from the avatar shop for free. It used to cost 100 Robux (the Roblox currency) to download but has since become free. The Man Face has been around since 2012; however, back in those days, it was called the Johnny Face. The name was later changed to coincide with the Man Bundle.

Here is where you can download Man Face on Roblox: Man Face by Roblox. You need to create an account first and then click on the Get button to download it. You may also want to view the general Man Bundle where you can equip the man with things like hair, a face, and choose the head, torso, arms, and legs.

Mat Diekhake is the editor of ConsumingTech.com. He has been inseparable from the internet since Web 2.0 in 2005, and by 2008 decided on a career in IT. With a never ebbing desire to cover technology, he spends most days consumed by Windows, Linux, and Android in particular. Though he has spent innumerable hours learning consumer software in general, formally and as an autodidact, and has personally authored over 10,000 articles since 2010. He is a qualified Microsoft Windows systems administrator (MSCA). Read Mathew's full biography. Mathew's social profiles: Twitter, Facebook, Instagram, LinkedIn, and Github.
« How to Get OEM Unlock in Developer Options» Gmod New Addons Failed to Download