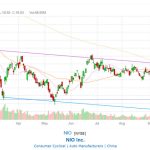 Nio stock looks attractive to buy for the first time in a long time. Since 2020, Nio has been one of my favorite stocks [for long-term investment potential]. I saw no reason why Nio’s market cap couldn’t rise to the same as Tesla’s, and given how much further analysts expected Tesla to rise, it meant immense upside for Nio.

The problem with Nio over the last year though is its market cap was quite high comparative to the rest of the market and other Chinese EV stocks. I was invested in Xpeng instead of Nio (that was a bad choice given how far Xpeng fell in the last few months). But now NIO’s market cap is more comparable with Xpeng and that means I’m starting to buy back into Nio.

I haven’t made nearly as much money over the last few months as I should have because of the impact Xpeng’s massive decline had on my portfolio. I had to pull my money out at a huge loss as well because Citigroup came out with a downgrade rating and price target of $3.18 which I had no choice but to listen to as it meant a further 50% decline from its low. I’m sure Xpeng will rise again and I should have kept my money on it. But by having some money on Nio, at least I will make some money back if Chinese EVs do rise. I feel more confident owning Nio than Xpeng because it’s clear Nio is the preferred EV company of the two.

Nio’s P/E ratio is not yet known. However, its market cap of 17.27 billion is attractive to buyers. It has to head toward a 100 billion dollar market cap over the next few years.

Mat Diekhake is the editor of ConsumingTech.com. He has been inseparable from the internet since Web 2.0 in 2005, and by 2008 decided on a career in IT. With a never-ebbing desire to cover technology, he spends most days consumed by Windows, Linux, and Android in particular. Though he has spent innumerable hours learning consumer software in general, formally and as an autodidact, and has personally authored over 10,000 articles since 2010. He is a qualified Microsoft Windows systems administrator (MSCA). Read Mathew's full biography. Mathew's social profiles: Twitter, Facebook, Instagram, LinkedIn, and Github.
« Microsoft Could Be Leader in Metaverse with Microsoft Mesh» Lyft Forms Multiple Bottom – Nov 16, 2022